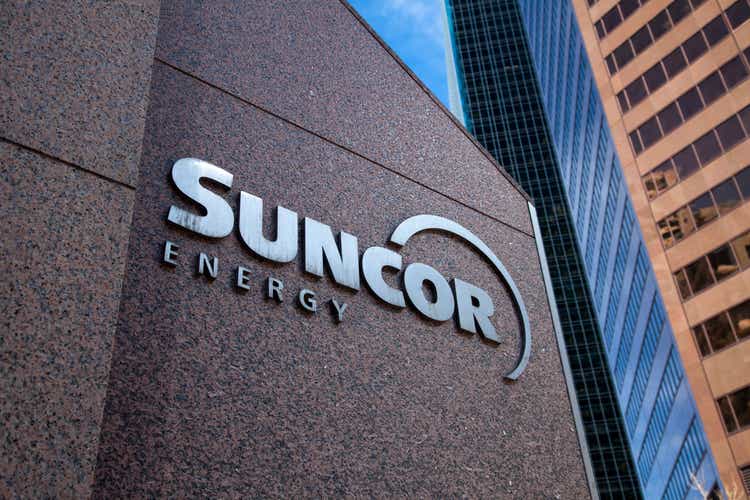 Investment thesis: The market seems to be having a very hard time coming to terms with the reality of the fact that global oil production seems to have peaked five years ago.

On a monthly basis global crude oil production reached an all-time high level of 84.5 mb/d on November 2018. As we can see from the chart, even as the world has seen a significant oil price spike this year, global production actually trended in the opposite direction from what was expected to happen due to the price signal effect. Clearly, the world is increasingly struggling to get enough crude to the global market. Suncor (NYSE:SU) is one of the few exceptions, with ample reserves underpinning its efforts to continue to steadily increase production. This makes it one of the best long-term bets among all oil majors, and perhaps one of the best long-term bets overall as oil prices are set to rise significantly in the long term, in order to stimulate more supply.

As we can see, Suncor’s Q3 upstream production continued to gain compared with the same quarter from a year ago, growing by almost 4%. It continues to be a slow & steady production growth, which in conjunction with what I expect will be steadily rising oil prices, should combine to produce steadily improving revenue and profit growth.

In terms of its financial performance, in the third quarter of the year, there was a slippage in the otherwise steadily improving net earnings numbers.

The reason for the slippage has to do with a $3.4 billion impairment charge, therefore it is not in any way a reflection of Suncor’s actual profitability within the context of the current global oil price environment.

Other financial factors of note include the net debt situation, which stands at $14.5 billion, compared with $16.15 billion at the end of last year. It is a significant decline in its debt load and it makes up about a quarter of total expected revenues for this year. The debt situation is a reflection of the fact that Suncor has been expanding responsibly and it is in a good financial position to meet the challenges of an increasingly volatile commodities market.

The peak in global crude production may have been the most consequential economic event of the century, yet it and its wider implications are mostly ignored.

The commodities markets are likely to be very volatile going forward, but average oil prices are set to be high for the foreseeable future, even if the price range will see some very wild swings along the way. Part of the reason why we have not had to contend with this reality just yet is that the COVID crisis severely disrupted economic activity and since then we have also had the Ukraine crisis dragging down global economic activity.

On the supply side, the most referenced number tends to be the number of the total liquid which currently stands at around 101 mb/d. In other words, about 22 mb/d above and beyond the 79 mb/d of crude oil helps to propel the global economy. That 22 mb/d number is made up of refining volume gains, NGLs, ethanol, and so on. Unlike crude oil supply, which is down significantly, global liquid fuel production is currently flat compared with 2019.

The EIA forecasts global liquids demand to remain flat next year compared with current levels. Flat total liquids production will suffice to meet demand in this scenario. However, if we look back at crude oil production that underpins global liquid fuels production, we have seen a 1 mb/d decline since February of this year. Geological realities, such as the fact that we are currently producing about eight times more oil & gas than we are discovering, do not bode well for our odds of stemming the continued decline. Geopolitical issues, such as the impending EU ban on Russian oil imports, as well as the G7 Russian oil price cap, could cause a further decline in global crude production next year, which will mean that we will not be able to sustain current levels of liquid fuels production next year, or any year thereafter.

On occasion, geopolitics & the schedule of various crude extraction project starts or recovery enhancement operations will coincide to provide a year or two of relief from the pressures to constantly reduce demand. Growing EV sales will eventually start to make serious inroads into global crude oil demand growth, which will help to alleviate some of the market pressures to maintain the supply/demand balance on the demand side of the equation.

No matter how hard we will try to cut down on our crude oil dependency, we will continue to consume large amounts of it for many decades to come. We may be seeing an EV revolution, but EVs are yet to come close to replacing the utility level that the global middle class currently enjoys from driving a relatively cheap conventional car. EVs can only do that in the luxury segment, price range-wise. Long haul trucking is not yet there either, in terms of being able to ditch the liquid fuels habit. Air travel, water-based shipping, and other forms of hauling and work still need liquid fuels to be viable. That is where Suncor’s reserves and its ability to continue growing production come in.

Suncor’s reserves have been greatly undervalued last decade, due to the shale revolution as well as flawed peak oil demand assumptions.

It seems to me that the market still has a very hard time coming back from what was a deeply ingrained hypothesis that took root last decade, namely that oil & gas companies are sitting on stranded assets in the ground. The shale revolution seemed to have unlocked an endless period of production growth. A decade into it, it looks like the US shale revolution has mostly stagnated, but there are still those who believe that the stagnation is politically-induced, not so much a function of geological realities.

At the same time, parallel with the shale revolution, the EV revolution was taking hold, leading to the rise of the unfounded belief that within perhaps a few decades the world economy will go close to 100% independent of crude oil needs. There is to date little empirical evidence to suggest that the rise of the EV is leading to an end to petroleum demand growth. Economic turbulence seems to be the only factor that can stem global demand growth, which is what we saw this decade, starting with the COVID crisis, followed by the Ukraine crisis, and also other factors such as US-China frictions, China’s continued COVID restrictions and so on. In the absence of these demand destruction events, we would currently be faced with a very tight global crude supply/demand balance, where I believe the economic outcome would have been the same even if the above-mentioned events would have never occurred.

It is very important to spell out and try to fully understand the current state of the global crude supply/demand situation, in order to fully appreciate Suncor’s reserves, and their true value going forward.

As we can see, Suncor’s core assets are more than just about those upstream reserves, mainly made up of Canadian oil sands. That is however by far the asset that matters most within the context of a world that is currently producing about 5 mb/d less crude oil than it did at its peak, and it will most likely never reach those production highs again. For context, 25 years’ worth of crude production at current rates, amounts to about 6.6 billion barrels of crude oil. By comparison, Shell (SHEL) has about 9 billion barrels of oil & gas equivalent in reserves. Shell’s market cap is about $200 billion, versus Suncor’s market cap of less than $50 billion. There are many other factors that need to be considered, including Shell’s massive LNG capacity, nevertheless, I think it is still a very strong indicator in regards to just how much of a disconnect there still is in regards to Suncor’s reserves and its value to the company and its financial results going forward, within a context of dwindling global crude oil supply.

Suncor currently makes up about a fifth of my total stock investment portfolio, including my current cash position, which is at about 30%. I should note that Canadian Natural Resources (CNQ) makes up a further 7% of my total portfolio, which makes my total oil sand exposure a seemingly unhealthy, disproportional, risky bet measured by conventional investment wisdom standards. I do not believe that we are living through conventional times. For the first time in over a century and a half, we seem to have entered that much-dreaded era of peak crude oil production. At the same time, a healthy, expanding global economy still requires expanding liquid fuel supplies. It, therefore, makes sense to be overweight on the stocks of the few companies that still have significant reserves and production growth potential.

While I intend to take some profits when WTI oil goes above $100/barrel, which I intend to replace once we go below $80/barrel, I also intend to keep Suncor stock as my biggest stock investment position for the foreseeable future, given that it is sitting on a large portion of the reserves that our collective global economic future depends on more than ever.