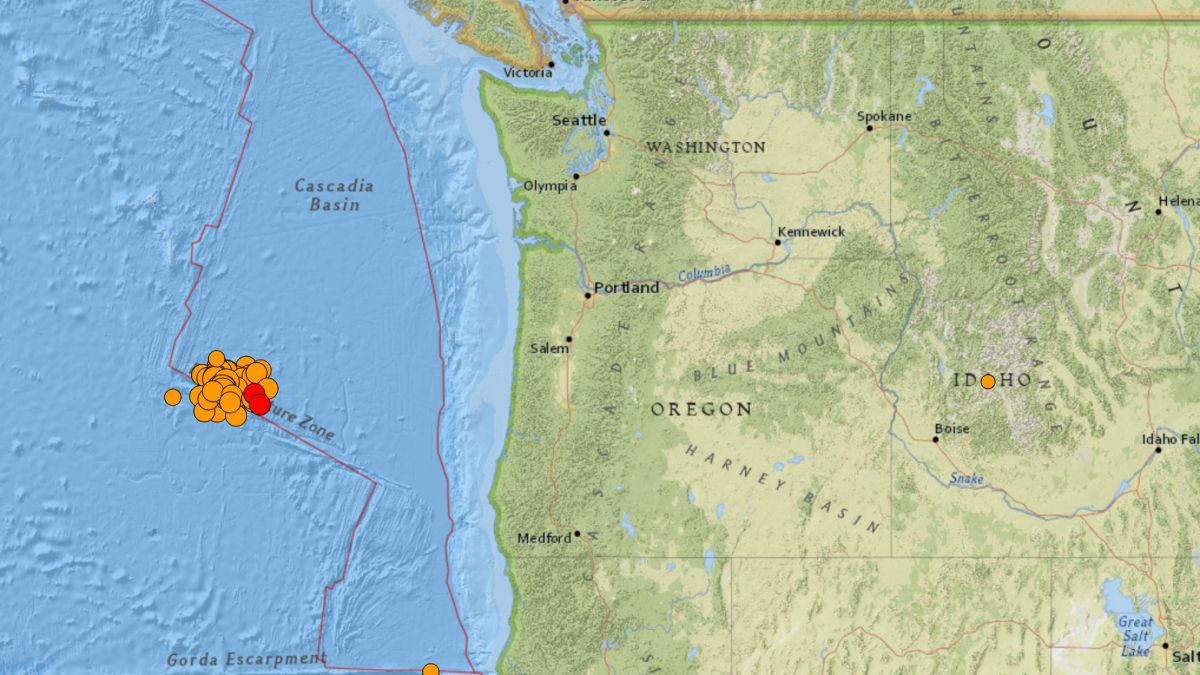 More than 50 earthquakes have shaken the ocean floor off the Oregon coast in the past two days. But scientists say the earthquake swarm has a low risk of threatening life or property on land.

The quakes, 55 of them as of midday on Wednesday (Dec. 9), were mostly in the magnitude range of 4.0 to 5.5, with the largest topping out at 5.8, according to the U.S. Geological Survey. They occurred in a region known as the Blanco Fault Zone, which is an area that often shudders with moderate-sized quakes.

Blanco’s proximity to the Cascadia Subduction Zone sometimes leads to fears that earthquakes in the Blanco Fault Zone will add strain to the faults in Cascadia. Those faults are capable of producing very large quakes along coastal Oregon and Washington. But seismologists say that’s not a threat.

“There’s quite a lot of distance from these quakes to the Cascadia Subduction Zone,” Harold Tobin, the director of the Pacific Northwest Seismic Network at the University of Washington, told CNN. “Our best current understanding of how stress transfers through the crust (and mantle) would suggest that these events don’t change stress on the subduction zone appreciably.”

The Blanco Fault Zone is about 200 miles (322 kilometers) from the Cascadia Subduction Zone. At Cascadia, the Juan de Fuca plate dives under the North American plate. This diving motion is known as subduction, and it can produce large, devastating earthquakes. The up-down motion of the crust at subduction zones can also create dangerous tsunamis.

But Blanco is a kinder, gentler fault zone. It sits at the spot where the Juan de Fuca plate and the Pacific plate rub against each other. It’s a transform fault zone, also known as a strike-slip boundary. As the name suggests, this means the plates slip past each other with very little up-and-down motion. While strike-slip faults (such as the San Andreas Fault) can lead to dangerous quakes, the lack of vertical motion on the fault means the risk of a tsunami from a Blanco quake is low, according to a 2019 blog post from Scientific American.

The crust at the Blanco Fault Zone is also relatively young and warm, as compared with the more brittle continental crust found at a fault like the San Andreas, according to that post. Younger, warmer crust breaks more easily in smaller events, and the seismic waves don’t travel as far as in colder, older crust. The fault zone is far enough offshore that the waves from even the larger quakes at the Blanco Fault Zone don’t reach land.

For all these reasons, scientists aren’t alarmed by this week’s earthquake swarm.

“In the past 20 years alone, there have been 91 earthquakes of magnitude 5.0 or larger on the Blanco,” Tobin wrote on Twitter. “These happen a lot!”