A strata letter sent to a Sydney tenant has provoked outrage online after it demanded residents ask permission before placing pot plants, outdoor furniture and barbecues on their balconies.

The letter, posted on Reddit and dated October 24, told residents that “exterior change requests” were mandatory for all owners and occupiers with unit balconies facing the street.

“With several apartments currently for rent or sale, we must present the building as favourably as possible,” the letter read.

“Changes that require approval include (for example but are not limited to) outdoor furniture, barbecue units, and plant pots in loud colours.”﻿

The strata also told tenants that laundry “should not be visible from your balcony at any time”.

“There is a dryer in every unit so there is no reason to be airing laundry outdoors,” they wrote.﻿

One pointed out that mandating dryer use with power prices set to rise was “absolutely ridiculous”.

But according to New South Wales Fair Trading, ﻿there is room for strata to issue orders about how properties are displayed.

“The Strata Act provides that by-laws must not be harsh, unconscionable or oppressive. By-laws also have no force if they are inconsistent with the Act or other laws,” a spokesperson said.

“By-laws can be made about the appearance of a lot and hanging of washing on the outside of a lot.”

Examples of by-laws that owners corporations can adopt for their strata schemes can be seen here.

“The Residential Tenancies Act 2010 requires landlords and their agents to give tenants a copy of the strata scheme by-laws before the tenant enters a tenancy agreement,” the spokesperson said.

“If the tenant has not previously been given a copy of the strata scheme by-laws, the Strata Act requires landlords to do so within 14 days from when the tenant takes possession of the lot.”

The spokesperson﻿ said only lot owners could dispute strata by-laws, but renters could approach their landlord with a potential complaint to see if their landlord would be willing to do so. 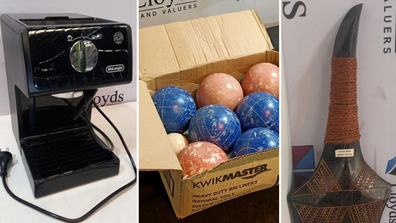 The Tenants Union of NSW said the key in any dispute raised with the strata would likely hinge on the “harsh, unconscionable or oppressive” protection, and would be a matter for the Tribunal.

“For an owner-occupier, the worst-case scenario of a breach of the by-law is a fine – this can eventually be applied daily and can really add up,” a union spokesperson said.

“However for a renter, they face eviction on top of the fine because the by-laws do form part of their tenancy agreement.﻿”

NSW Fair Trading advises people who have a dispute with their strata to first try to solve it through negotiation, then through Fair Trading’s free mediating service, and as a “last resort” as the NSW Civil and Administrative Tribunal.﻿