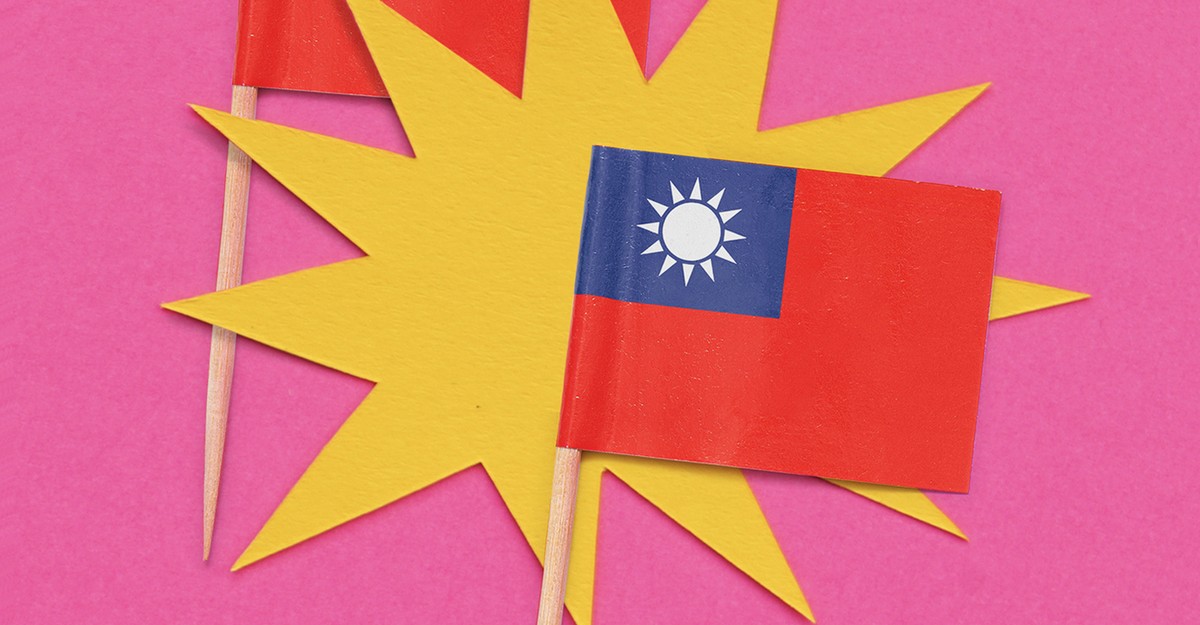 The night before boarding a flight home, at the end of a trip that had taken me from D.C. to Taiwan, Japan, Macedonia, Turkey, and back again, I came across a tweet that succinctly crystallized many of the fleeting impressions I had accumulated on the Pacific leg of my journey. The tweet was from Tanner Greer, a brilliant and iconoclastic China scholar, citing a quote about Taiwan sometimes attributed to Kurt Campbell, years before he became President Joe Biden’s chief Asia adviser on the National Security Council: “I thought I was going to find a second Israel; I found a second Costa Rica.”

“Whether Campbell ever said such a thing is beyond the point,” Greer wrote, explaining that he’d heard it from a Taiwanese think-tank associate. “What mattered was that this retired Taiwanese nat/sec official believed he could have said it, and believed the description accurate.”

The point of the anecdote is that the Taiwanese don’t seem to take the threats to their security nearly as seriously as most observers in Washington do. The Taiwanese worry, of course. It’s impossible not to, especially because China has altered the status quo in the Taiwan Strait after House Speaker Nancy Pelosi’s visit earlier this year by repeatedly sending fighter jets and frigates far into Taiwan’s territorial waters. But the mood on the island is much more relaxed than the mood in Israel, a country that similarly faces implacable hostility from some of its neighbors. Indeed, the contrast could not be more pronounced.

From the December 2022 issue: Taiwan prepares to be invaded

So what is going on with Taiwan? The two-day conference on nationalism I attended at Sun Yat-sen University, in the southern city of Kaohsiung, provided some clues. In my discussions with Taiwanese scholars, I quickly apprehended that Taiwanese identity is still in flux. This is not to suggest that Taiwan’s identity has not diverged significantly from China’s. Taiwan was long a Chinese backwater, with a distinct frontier culture, before it was ceded by the Qing dynasty to Japan in 1895. Half a century of Japanese colonialism left its mark, as did the subsequent brutal (and only semi-successful) re-Sinification policies of China’s nationalist leader Chiang Kai-shek. The advent of democracy in Taiwan in 1996, and its entrenchment since, has only deepened the differences with the mainland.

But the differences are not so cut-and-dried. Spend some time talking with Taiwanese business leaders or policy specialists in the more prosperous north, and Taiwanese identity takes on other valences. Almost no one fully identifies with mainland China, but people believe they understand mainlanders well—certainly better than the panicked West does. There is no way that China’s leader, Xi Jinping, would order an invasion, my fellow visitors and I were repeatedly assured. Such a move would not only be fratricidal; it would be counterproductive—destroying a vital hub in global supply chains that would otherwise fall into China’s lap should peaceful unification happen. One defense expert I spoke with even ruefully floated the idea that Taiwan is a buffer state likely to be drawn into a tragic spiral of escalating tensions between China and the United States as they compete for regional hegemony. He was not quite blaming us Americans for the war that many in Washington think is inevitable—but only just not.

Young people have markedly ambivalent attitudes, too. One researcher at the conference discussed preliminary survey data suggesting that the TikTok generation is developing some cultural affinity for China, especially through a renewed commitment to Mandarin (although it is the island’s official tongue, it competes with several minority languages). Taiwan remains a net exporter of pop culture to the mainland, I was told, but influence is not a one-way street. Dexter Filkins’s recent essay on Taiwan in The New Yorker includes a profile of two Taiwanese university students who started a popular satire show on YouTube poking fun at China. As one of them told him: “We don’t feel connected to China, but there is no way that we can say that we are not related to China, because many people’s ancestors are immigrants from there.”

As someone who carefully watches the Russia-Ukraine struggle, I’m struck by the parallels. Taiwan is, in many ways, where Ukraine was before the 2014 conflict started solidifying its national identity well beyond the legacy of the country’s long and complicated history. Like Taiwan, Ukraine has distinguished itself from its antagonistic neighbor by being a liberal democracy. And just as Taiwan’s business class was conflicted about its ties to China, so too did Ukraine’s post-Soviet oligarchs feel equivocal about their links to Russia. And indeed, like the Taiwanese, many Ukrainians were in deep denial about the threat from next door until it was almost too late; despite all the evidence, even President Volodymyr Zelensky was typical of his compatriots who could not bring themselves to believe that Russian President Vladimir Putin would go all in and invade, as he did earlier this year.

Maybe, as in Ukraine, an all-out war with China would make the Taiwanese coalesce in ways that would surprise a visitor to the island today. But the problem for Taiwan is that, unlike Ukraine, it doesn’t have the possibility of trading territory for time, retreating and waiting until the enemy is overextended before delivering deadly counterpunches. Taiwan is more densely populated than anywhere I’ve ever seen. The seemingly separate cities virtually constitute a single interlocking megalopolis that hugs the entire shoreline facing China. Behind the cities loom steep mountains. There is no equivalent of Poland for Taiwan—nowhere for refugees to flee, and nowhere to stage weapons deliveries.

Read: The lessons Taiwan is learning from Ukraine

So the Achilles’ heel of pluralistic democracies like Ukraine and Taiwan may be their inability to see what is staring them in the face, especially when that thing is too horrible to behold. Many Ukrainians (and several Russian liberals I know) found the idea of a fratricidal war like the one Putin unleashed simply inconceivable. Or maybe liberal democracies, which unshackle people to improve their individual lot above all else, just find it hard to price in the part that primal, atavistic impulses play in international relations.

At any rate, this is a reality that the United States faces in Taiwan. Americans, too, must not flinch and think that things are other than they are. Despite what many diplomats, politicians, and pundits say, the U.S. would not fight for Taiwan because it is a democracy. Taiwan would probably be worth defending even if Chiang Kai-shek were still ruling it with a bloody fist. Whether the island sometimes seems ungrateful for American largesse, or is even suspicious that the U.S. will drag it into a conflict it does not want, makes no difference.

To continue with the parallel, the U.S. is helping Ukraine not because it is a democracy, but because it makes sense for us to do so. Ukraine is weakening one of the main revisionist powers in Europe at comparatively low cost to us, and is thus helping lay the groundwork for a lasting security order in Europe. Taiwan is of greater strategic significance to the U.S. than Ukraine will ever be. And unlike aiding Ukraine, defending Taiwan could be much more painful.

What is America’s cost-benefit calculus? I’m up for that debate. But spare me the democratic sentimentalism.

This article was originally published by The Wisdom of Crowds.