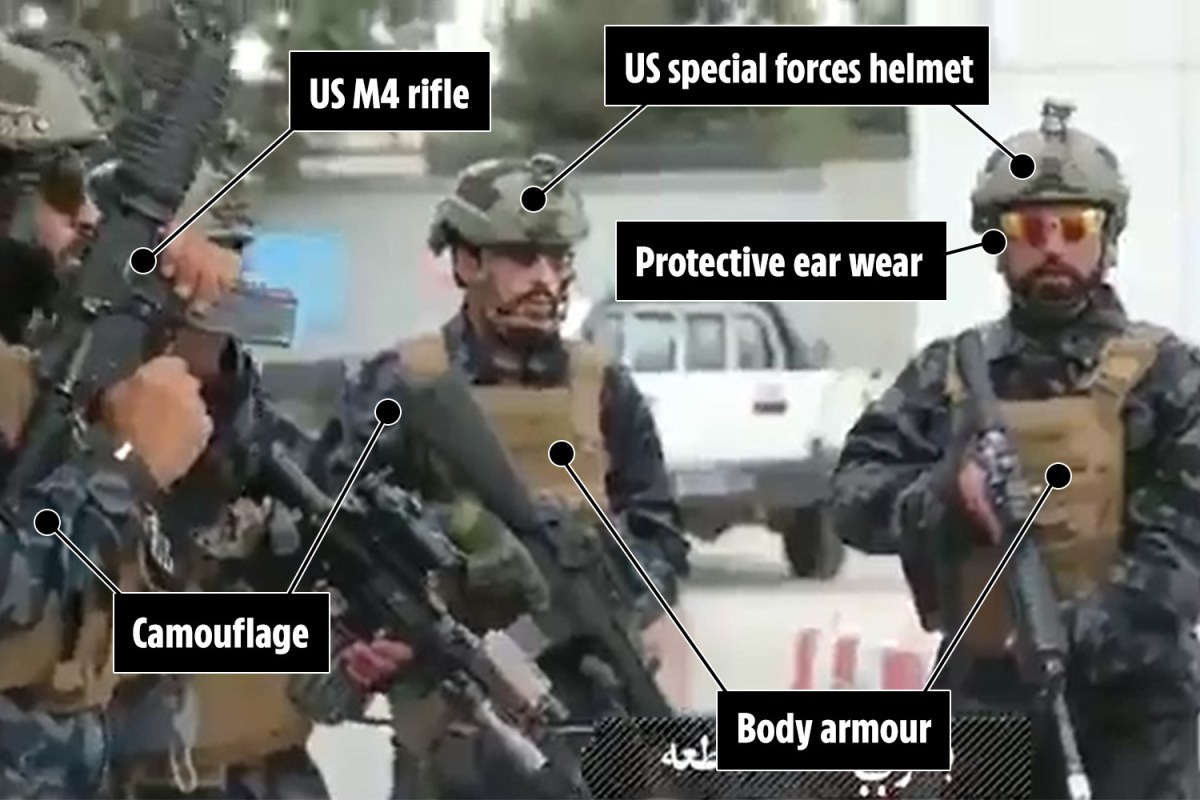 TALIBAN propaganda channels are showing brazen fanatics tooled up in the streets of Kabul in what appears to be stolen US-made military gear.

The ISIS-style video shows troops armed to the teeth with modern military equipment — rather than the militants’ usual robes with an AK-47 slung over the shoulder.

The militants’ slick propaganda film of a unit called the “Badri 313 Brigade”.

It warns their formidable special forces would be on the streets of Kabul and guarding the presidential palace.

But their gear appears to be usually used by the US-equipped special forces of the deposed government.

In videos released by the group, the Badri 313 soldiers are seen with US special forces military helmets with mounts for night vision goggles.

They also appear to be wearing eyewear which could help protect the eyes from explosion flashes.

Instead of the usual turban and robes, bulletproof vests over camouflage jackets and trousers are worn.

They are armed with tactical M4 rifles rather than AK47s.

Tactical radios are also seen on the newly acquired uniforms.

According to reports on Afghan social media, the shock troops have been deployed for security purposes after the Taliban’s lightning sweep of the country.

The unit is reportedly named after the Battle of Badr that is written about in the Qur’an and happened 1,400 years ago.

India Today reports the Badri 313 prepares like any other special forces commando unit, employing tactical and attack training in undisclosed locations run by the Taliban.

One US official, speaking on the condition of anonymity, told Reuters: “Everything that hasn’t been destroyed is the Taliban’s now.”

US President Joe Biden’s administration is so concerned about the weapons that it is considering a number of options to pursue.

The officials said launching airstrikes against the larger equipment, such as helicopters, has not been ruled out, but there is concern that would antagonise the Taliban at a time the United States’ main goal is evacuating people.

Another official told Reuters that while there are no definitive numbers yet, the current intelligence assessment was that the Taliban are believed to control more than 2,000 armored vehicles.

This included US Humvees, and up to 40 aircraft potentially including UH-60 Black Hawks, scout attack helicopters, and ScanEagle military drones.

Rep Michael McCaul, the top Republican on the U.S. House of Representatives Foreign Affairs Committee, told Reuters in an email: “We have already seen Taliban fighters armed with US-made weapons they seized from the Afghan forces.

“This poses a significant threat to the United States and our allies.”

Between 2002 and 2017, the United States gave the Afghan military an estimated $28 billion in weaponry, including guns, rockets, night-vision goggles and even small drones for intelligence gathering.

But aircraft like the Blackhawk helicopters have been the most visible sign of US military assistance and were supposed to be the Afghan military’s biggest advantage over the Taliban.

Pictures from the fall of Kabul and during the Taliban’s surge from town-to-town in the weeks prior show the rag-tag band of fighters seizing weapons and trucks that would make some nations jealous.

And one video shows dozens of Humvees held in a compound now controlled by the Taliban.