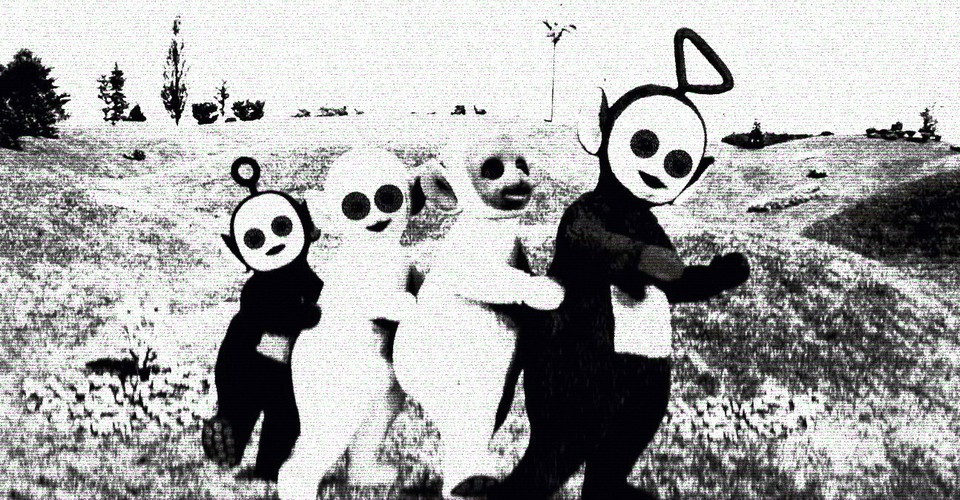 There is a dome, post-Soviet and colorful, wired with the kind of technological doodads you might see in a Bond villain’s lair— revolving modernist chairs, disembodied voices rising out of metal speakers issuing orders for the day. A giant ball bounces ominously in the background. People disappear from time to time, but nobody leaves. Everyone seems to be constantly being watched.

I’m describing the avant-garde 1967 mystery series The Prisoner, but also the children’s television show Teletubbies, which, thanks to unfortunate life circumstances, I’ve watched more this year than anything else. First of all, a disclaimer: The American Academy of Pediatrics recommends that no child watch television until they’re at least 18 months old, advice I fully intended to follow until I idiotically had two babies at once. By the time they hit 16 months, I would have bitten off my own arm for an uninterrupted 10 minutes or the chance to drink coffee that hadn’t already been microwaved four times. We started with Postman Pat, a gentle stop-motion series about a slow-witted English mailman, but although my toddlers moshed wildly during the theme song, they ignored everything that followed.

Read: Becoming a parent during the pandemic was the hardest thing I’ve ever done

One day, I threw on Teletubbies, an acid trip of a show about portly humanoid creatures whose life in a verdant CGI landscape is routinely interrupted by videos playing on screens embedded in their bellies. My daughter stared at the screen, mouth agape. She laughed hysterically as the tubbies jumped out of a hole in the ground. She watched for a whole delighted five minutes, and I took videos of her the entire time instead of enjoying the precious mental vacation, because children corrupt your brain.

Teletubbyland is a deeply disturbing place, and my weirdo babies can’t get enough. (We let them watch two 15-minute episodes a day, unless it’s raining, or they’re sick or teething, or one of us has already chiseled HELP into the furniture by 10 a.m. on a Saturday.) There are four primary characters: Tinky Winky, Dipsy, Laa-Laa, and Po, each a different shade of headache-inducing fuzz. They live inside a dome built into the earth. Every day, a system of loudspeakers called Voice Trumpets wake them and dictate their actions (“Time for the Tubby Custard Ride,” “Time for Tubby Bye-Bye”). An unseen narrator whom the tubbies can hear explains periodically how the characters are feeling. There’s also an anthropomorphic vacuum cleaner called Noo-noo who cleans up endlessly after the messy, messy tubbies; rolls his eyes a lot; and, in one sequence, longs for the quiet of an endless sleep. (I identify as Noo-noo.)

The show my children watch is a rebooted version of a program that debuted in 1997. Its co-creators, Andrew Davenport and Anne Wood, were tasked with developing a show for preschoolers by the BBC, and Davenport’s interest in how the technological advances of the era were shaping children led to the Teletubbies: four enormous, dumpy, semi-sentient bean bags with antennae on their heads and televisions in their tummies. They are, essentially, toddlers with no adult in charge, aside from the disembodied speakerphone dictator. They communicate in sentence fragments and mangled words. (“Eh-oh,” famously, is their greeting.) Their planet looks like the default Windows XP wallpaper, and their sun has the face and laugh of a delighted baby. Midway through every episode, mysterious transmitters in Teletubbyland start spinning, broadcasting a short video about real human children through one of the tubbies’ bellies that is shown not once but twice.

After Teletubbies debuted, some parents and the Reverend Jerry Falwell were briefly appalled (the latter was concerned that Tinky Winky, who speaks with a male-sounding voice and carries a large red handbag, might be gay). But the show’s primary demographic—young children, although the show also became a cult hit among stoners—was immediately hooked. The tubbies released a hit single in 1997 (“Teletubbies Say ‘Eh-Oh!’”), signed merchandising deals with McDonald’s and Burger King, and made the BBC more money than any previous show in its history.) They split up—the show ended in 2001—but have occasionally reunited for live events and publicity stunts. In 2014, a new production company rebooted Teletubbies, and although the show remains largely the same, the brand has been extended to an unnerving collection of social-media accounts that do things like tweet at Starbucks and dress Laa-Laa up as Billie Eilish.

As a teenager, I simply accepted the presence of the Teletubbies in the universe without contemplation or complaint, as if they were Carhartt jeans or the music of Avril Lavigne. But as a parent, my experience of them now is full of terror and questions. Who is controlling the Voice Trumpets? Where do the Teletubbies come from? (They don’t have any obvious reproductive parts, which both suggests they’re lab-built and bats away Falwell’s concern.) Why do they still have antennae even though their tummy TVs are now touch screens? Why is their diet (blackened toast and custard the color of Pepto-Bismol) so unappetizing? Are they prisoners, and of whom? On the occasions when only two or three of them are present and the others are missing, where do they go? (For experiments, my brain says.)

More disturbing still is the addition of the Tiddlytubbies, eight small baby versions of the Teletubbies who live in a kind of infant jail, unsupervised. Sometimes, the tubbies go and sing to them, in a children-taking-care-of-children way that can be profoundly unsettling if you remember recent news events. My kids, of course, register none of this. They see the toddler impulse to care for smaller things playing out on-screen—the Teletubbies petting their baby selves in the same way my son briefly hugs his doll before immediately throwing it to the ground when something else catches his eye. (He’s a very shoddy parent.)

This, I think, is what ultimately makes the show so discomfiting for me to watch and so beguiling for my twins: The show is uncannily good at replicating the toddler experience. Without the ability to scream and protest—something neither preschoolers nor guardians want to see on-screen—the Teletubbies are totally powerless. They can’t dictate how their day might go or efficiently communicate that they might want oatmeal, not toast. Their lives are governed by repetitive schedules and a series of arbitrary commands. But the environment that reads to me now as a kind of psychedelic dystopia, with its rigid control and unexplained phenomena (Tinky Winky finds a didgeridoo! Po learns flamenco dancing!), also contains its own entrancement. Emotions come and go; toys appear and disappear; new and delightful experiences manifest themselves in totally unpredictable ways. It’s not menacing at all for my children—sweet, unformed dum-dums that they are. It’s pure magic.