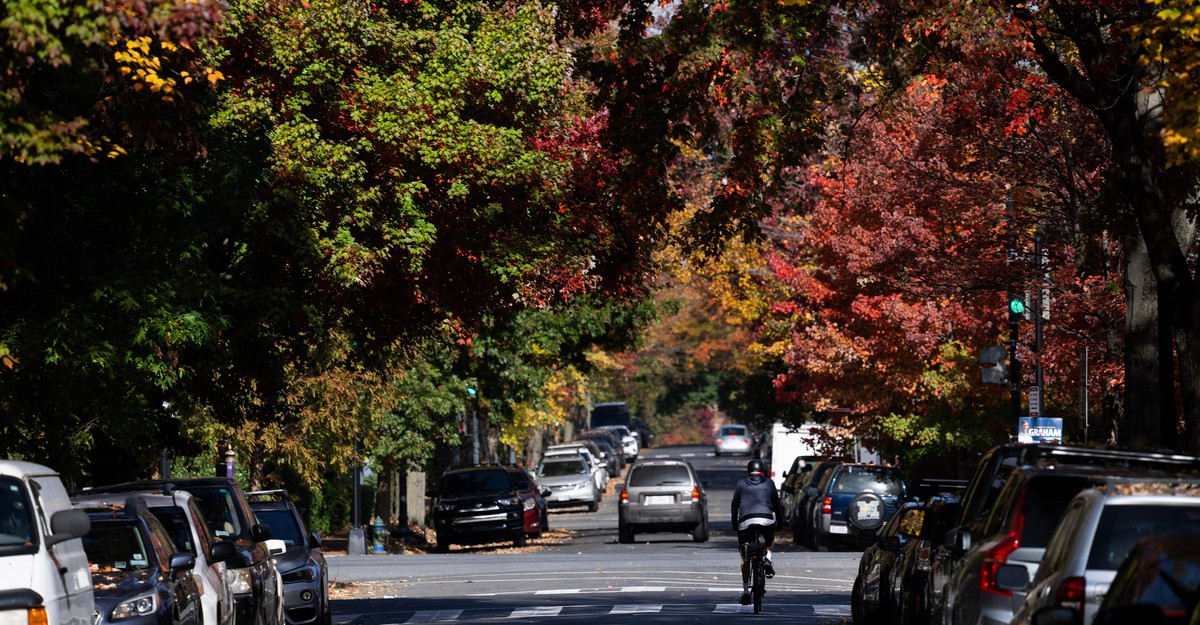 In August of last year, the Afghan journalist Bushra Seddique, now a 23-year-old editorial fellow at The Atlantic, fled Kabul, smuggling her laptop past the Taliban and leaving members of her family behind. I called Bushra, now living in the Washington D.C., area, to talk about her first Thanksgiving at home in the U.S.

Isabel Fattal: Where were you this time last year?

Bushra Seddique: Last Thanksgiving—my first Thanksgiving—I was in a refugee camp in Indiana. One of our Afghan friends had an American friend, and that American friend gave him a big cooked turkey with stuffing and all the sides. He brought the turkey to the room we were living in. We asked what it was, and he told us about this big American holiday.

There were maybe 25 people in that room. We all sat together and ate the turkey and all the stuffing. It wasn’t baked; I think it was fried. It was really good.

Isabel: What do you think of Thanksgiving?

Isabel: What are your thoughts on gratitude now?

Bushra: I had a good relationship with gratitude before, but since I came to the U.S., it is even stronger. I have a lot more to be thankful for than last year. First: I am thankful for being alive, since leaving Afghanistan and leaving the war. The second thing is being thankful for having part of my family in the U.S., safe and alive. Working as a journalist again.

In general, I can say I’m thankful for having the second chance of building a life. After leaving my country, I have the chance to experience a lot of seconds: a new job, new apartment, new career.

Isabel: Coming to this country with fresh eyes, what do you think our society takes for granted?

Bushra: I wish I had the opportunity to show Americans how life is in other countries. In my country, most families go to sleep hungry. If you want to start to be thankful, start with the food on the table.

And then there’s education. The U.S. has the highest-ranking universities in the world. You can be anything you want. Women have a lot of rights here. We didn’t have rights and freedoms in Afghanistan. Even just transportation—Americans have metros, bicycles, scooters, cars, trains, trucks. You can’t find all this in Afghanistan. Freedom of speech, freedom of religion, freedom of ethnicities—these are the big things Americans should be thankful for.

My sister is a junior in an American school. She’s always telling me about the opportunities these American kids have in their schools. If we could bring these opportunities to Afghan kids, they would use them very well. They don’t even have a chair and table to sit in during class.

Isabel: How are you thinking about your home and your family in Afghanistan?

Bushra: I don’t know how I can help the people that are in need. But in the two pre-Thanksgiving celebrations I went to, and in my coming Thanksgiving, I will pray for them in a big circle of people. Sometimes I ask my American friends to pray for them.

Isabel: What advice would you give Americans who want to express gratitude for all that they have?

Bushra: I find Americans very kind and giving people. They are doing whatever they can. Ever since I arrived, a lot of Americans have been trying to help me to build a life here, which I am grateful for. Keep doing that. You’re going to be a great nation if you have the sense of giving and of helping others. One other thing Americans can do is pay attention to other countries, especially at Thanksgiving. Pay attention to poor countries, Middle Eastern countries, countries that are in dire need.

Isabel: What are your plans for tomorrow?

Bushra: I’m going to be with my sister and a very special friend and mentor, who invited us to Thanksgiving dinner with his family.

Since the start of 2022, I’ve consumed more than my body weight in sweet potatoes. The average American eats closer to the equivalent of one (1) fry a day, but for the past decade, I’ve had at least half a pound of the roots at almost every dinner. I travel with sweet potatoes more reliably than I travel with my spouse. All I need in order to chow down is a microwave and something to cushion my hands against the heat.

Tomorrow, Americans will finally put sweet potatoes in the spotlight—and still not appreciate all that they’re worth. Families across the country will smother the roots with sugar and butter beneath a crunchy marshmallow crust. This classic casserole may be the only serving of sweet potatoes some people have all year—which is a travesty in terms of both quantity and (sorry) preparation style. Sweet potatoes deserve so much more than what Thanksgiving serves them. And maybe they’d get it, if they weren’t so misunderstood.

Read. These eight books will each lead you down a rabbit hole.

Watch. Season 2 of The Vow, an HBO series about a cult—and humans’ dangerous desire for stories.

And if you need something enjoyable to watch with family, check out our list of the 25 best comfort movies.