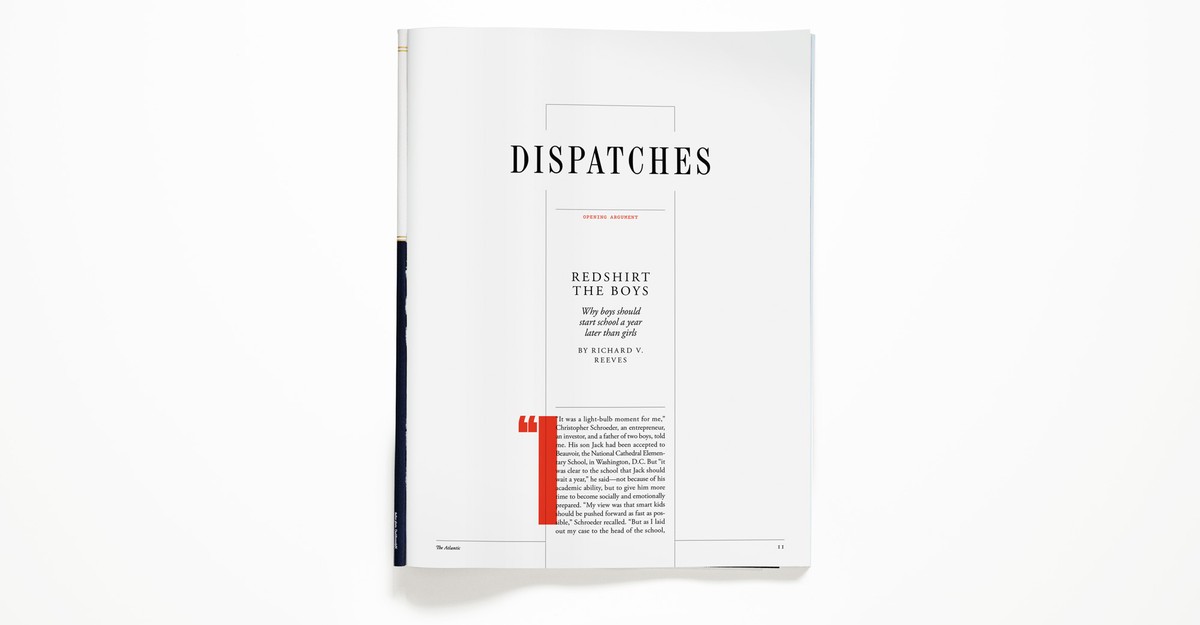 Speaking as a 75-year-old man, I completely agree with Richard Reeves’s “Redshirt the Boys.” To avoid one more year of child care, my parents started me in first grade at age 5. I turned 6 in late October, making me one of the youngest boys in every class through high school. I was athletically gifted, but growth-wise almost a year behind all my classmates. I was bullied regularly. Intellectually, my feelings of inferiority left me struggling to remain interested in any subject other than math.

Check out more from this issue and find your next story to read.

Reeves’s article made me wonder how much smoother my life would have been if I had been “redshirted” for a year. I hope someday a “Redshirt the Boys” law gets passed that will help boys become men, and eventually put a damper on our current level of toxic masculinity.

I have spent 36 years as a teacher and in leadership roles in schools across New Zealand, Australia, and the U.K. Though I was educated, trained, and began my career in coeducational environments, I have now spent 32 years at boys’ schools.

While redshirting might be an option for some families seeking to address the difference in boys’ and girls’ brain-development trajectories, it is certainly not the only one, nor is it the best way to address the personal needs of each individual boy.

By its very nature, redshirting is a heavy-hammer approach, bound by the rigid restrictions of the school calendar. Children mature at different rates and at different times. Redshirting boys by a year might be advantageous for some and detrimental to others. Some might benefit from a delay of six months or eight weeks, but the school calendar simply does not have the subtlety to adapt to this.

Another option is boys’ schools, which intentionally meet the developmental needs of boys. In and out of class, these schools can take time to provide experiences that build the relationships, respect, and trust that help boys thrive.

Reeves argues that girls doing better than boys in school is a problem, and that the solution is to give boys an advantage by starting them a year older. Can anyone seriously believe that having most of the boys in class be a year older and a head taller than the girls would actually be better for the girls? Millennia of evidence suggest otherwise—that the boys would lord it over the girls.

If students are going to be ranked, why should it not be women at the top? If girls’ success makes boys feel threatened, it’s because boys have been trained to expect the opposite. In fact they should be trained from childhood to understand that girls are smart and serious. Doubtless, individual parents with financial means will redshirt to give their sons an advantage, but it should certainly not be a social policy to encourage redshirting and tip the scales in favor of boys, rather than figuring out how to actually improve education for a future of equality.

Reeves fails to mention that nearly all of the high-paying jobs available to people with a high-school diploma or less are in male-dominated fields: electricians, plumbers, construction workers, brickmasons, steelworkers. Professions dominated by women with a high-school diploma or less include those in such low-paying fields as child care, retail, and elder care. That which is “female” or “feminine” is coded as “low value” by our society. Boys who fall behind in school can find great careers as mechanics, patrol officers, and wind-turbine technicians. The same options aren’t available to women—at least not without enduring sexual harassment. Maybe instead of “redshirting” boys, we should work on fixing the oppressive patriarchal system that dominates our culture.

I don’t see why a market-driven society such as ours should have a problem with girls doing better in school than boys. Egalitarianism is a utopian ideal. Let the children compete and let the chips fall where they may.

I’m grateful to all those who took the time to comment on my essay. The goal of the policy I propose is not to “tip the scales in favor of boys,” as some fear. Rather, it is to level the playing field in the spirit of equity given the developmental differences between the sexes. It is indeed something of a “heavy-hammer approach,” as Tom Batty points out, but that’s true of any policy using chronological age as a proxy for the best time to start school.

I strongly disagree with the idea that the academic struggles of boys, especially those from poorer backgrounds, are inconsequential because men can get good jobs anyway. Laura Weinstein writes that “boys who fall behind in school can find great careers as mechanics, patrol officers, and wind-turbine technicians.” Not so much anymore. These jobs may not require a four-year degree, but they typically require some postsecondary credentials. Helping boys do better at school is now essential to helping men do better in life. In my book Of Boys and Men, I also argue for a recruitment drive for male teachers, and more investment in vocational training—both of which will be of particular benefit to boys and men.

In “Where My Characters Come From,” Haruki Murakami explains how he goes about populating his novels: “As I write, a kind of axis forms that makes possible the appearance of certain characters, and I go ahead and fit one detail after another into place, like iron scraps attaching to a magnet.” This “unconscious and intuitive process” is the only option. “I have to do it like this, or my characters will turn out unnatural and dead.”

In her 1933 Atlantic essay, “Confessions of a Novelist,” Edith Wharton described her creative process in strikingly similar terms. “If the situation takes the lead,” she wrote, “I leave it lying about, as it were, in a quiet place, and just wait till the characters creep stealthily up and wriggle themselves into it. All I seem to have done is to say, at the outset: ‘This thing happened—but to whom?’” Eventually, the characters “begin to speak within me with their own voices.”

Like Murakami, Wharton found that ignoring “these people who haunt my brain” was a recipe for failure. Her characters appeared to her already named; even attempting to change those names ended fatally. “Any character I unchristened instantly died on my hands,” she wrote. Nearing the end of her career, Wharton said that she had finally “gained enough mastery … to be able to effect the change.” But, she admitted, “even now, when I do, I have to resort to piqûres and oxygen.”

In “Monuments to the Unthinkable,” Clint Smith writes about what the U.S. can learn from how Germany remembers the Holocaust. Smith describes the German artist Gunter Demnig’s Stolperstein project, which comprises more than 90,000 “stumbling stones” in 30 European countries, each of which commemorates a person persecuted by the Nazis.

Read: The story of Marion Ehrlich

The Stolperstein on our cover was photographed in Berlin; it is set into the cobblestones outside the apartment where Marion Ehrlich, a teenager, lived. The Nazis closed the Jewish school Ehrlich attended in June 1942; afterward, she performed forced labor at a Jewish cemetery. She was soon deported, at the age of 14. She died in Auschwitz.

This article appears in the December 2022 print edition with the headline “The Commons.” When you buy a book using a link on this page, we receive a commission. Thank you for supporting The Atlantic.