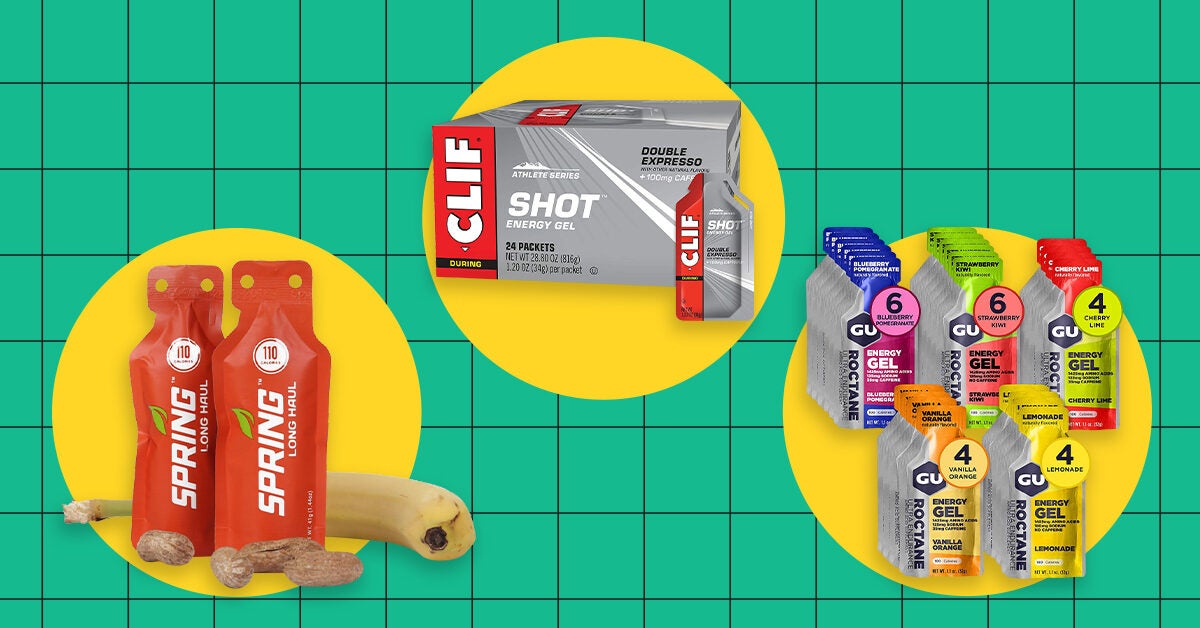 If you’ve ever hit “the wall” like a crash test dummy during a training session, chances are a well-timed energy gel could have kept you going.

While you don’t need energy gels for every workout, runners, cyclists, triathletes, and other serious athletes have made them a go-to fuel source during endurance workouts and on race day. However, many people still have questions about whether they should be using energy gels, when to use them, and which ones to use.

We put together a list of some of the best energy gels around, including a little advice from personal trainers working hard to keep their clients fueled right.

The personal trainers we spoke with offered pretty similar criteria to help us find the best energy gels:

Here’s a side-by-side comparison of our picks:

GU Energy Original Sports Nutrition Energy Gels come in a wide range of flavors — from the expected, like chocolate and vanilla, to the unexpected, like salted caramel and strawberry banana. Not many other energy gels have the flavor variety of GU.

However, it might take some trial and error to find a flavor you like (or at least can stand). You can start with an assortment pack to try a bunch of flavors with a single purchase.

The nutrient content varies by flavor, but they all contain sodium. These gels have a mid-range thickness, but remember to eat them with water (not a sports drink). You can also get them with or without caffeine.

Many reviewers report that they can find at least one or two flavors that work for them. Plus, this GU formula goes easy on most people’s digestion.

Huma Chia Energy Gels are made with relatively few ingredients. They’re all-natural but not organic.

They’re also vegan, gluten-free, and caffeine-free, and they still have the needed 100 calories and a good serving of carbs and two electrolytes to help you get through warm workouts. Plus, they have a gram of protein to feed your muscles and aid recovery.

Huma has a decent variety of flavors, so most people can find a flavor they like. However, some reviewers report that the chocolate and coffee flavors have a gritty texture. The pouches’ narrow openings can pose a challenge for cyclists as well.

The CLIF SHOT Energy Gels come in several flavors in each caffeine range, from 0 to 100 milligrams. Nutritionally, each pouch provides 24 to 25 grams of carbs with some sodium thrown in for an electrolyte boost.

Reviewers love the double espresso flavor for the added punch of caffeine. However, the citrus flavor gets bonus points for high palatability. There does seem to be a shipping problem, however. Many boxes arrive with burst gels, though no reviewers report gels bursting during their races (other than when they wanted them to).

These USDA-certified organic gels contain natural sugars in the form of honey and tapioca sugar. The USDA has strict requirements for the growing, harvesting, and manufacturing of products that receive this certification.

The honey content gives these more of a honey flavor than other gels, but for many people, that’s a plus. They also contain some sodium to replace electrolytes, but beyond carbs and sodium, they contain little else. For some people, that means they’re less likely to cause stomachaches.

If you like honey, you likely won’t mind these flavors. However, if honey isn’t your thing, you may want to look elsewhere.

Gatorade’s Endurance Energy Gels are thinner than the average gel. That has its pros and cons, depending on what you like.

For those who have a hard time with the somewhat odd texture of thick gels, this thinner formula is easier on the stomach. However, these have two drawbacks: A thinner formula can be messier, and they don’t have as many calories as other gels.

You still get 20 grams of carbs and a dose of sodium to replenish electrolytes. Just know that if you choose these gels, you might have to pack a few extra to meet your calorie needs.

Many people find the Gatorade gel flavors easier to eat than other gels, even though there are fewer flavor options.

The Science in Sport (SIS) Isotonic Energy Gels are made with a formula that doesn’t require the usual chug of water with the gel. That’s particularly useful for runners and endurance athletes on hot days, when too much water sloshing around can bring on bloating and stomach cramps.

The gel’s thinner consistency isn’t everyone’s favorite, but the watery formula is easier on your stomach, allowing your body to process the nutrients more quickly.

As for downsides, these gels have slightly fewer calories, and the added liquid content requires a large pouch.

These are a favorite for ultra events, in which your body uses so much energy that it starts eating itself by the end. Reviewers find many of the flavors more palatable than those of other gels. However, many people say the caffeinated variety leads to stomach upset on longer races.

Spring Energy Long Haul Gels are made of natural ingredients but have a blend of nutrients that go beyond carbs. For many, the lower sugar content, added protein, and a touch of fiber are gentler on the stomach.

These are particularly popular among marathoners, who often need more than just sugar to keep their bodies going. Some people’s stomachs are sensitive to too much sugar at once, and the Long Haul gels reduce the chances of that overload.

Spring Energy provides a range of flavors and formulas, including some that contain caffeine and extra electrolytes and others designed to aid recovery. Many a marathoner swears by Spring Energy gels.

Huma Plus Chia Energy Gels contain four electrolytes and have a higher water content, which will help replace the electrolytes you lose through perspiration during hot physical events.

These gels also contain all-natural (but not organic) ingredients. Marathon runners like them for the protein and fiber that help balance the high sugar content and ease digestion. There are flavors with and without caffeine, though those without caffeine tend to be easier on the stomach.

Reviewers wish there were more flavors, but overall they say these gels are easy to digest and that they help on the sweatier days.

Maurten Gel 100 is made with six basic ingredients:

This formula straddles the line between thick and goopy and too watery, landing somewhere in the middle. That means it’s super easy to eat while you’re running, riding, or doing something else that’s burning through your glycogen.

The short ingredient list also makes this gel one of the lighter ones in your stomach. As a bonus, it contains some electrolytes for those long, hot workouts or events.

The downside comes from the lack of flavor options. There’s only one flavor, available either caffeinated or uncaffeinated. Maurten Gel 100 is also one of the more expensive gels out there.

Here are a few common questions about energy gels and our best answers.

What’s the purpose of energy gels compared to water?

Water is always a necessity for hydration before, during, and after endurance activities. Energy gels are nutrient-dense gels designed to provide a quick burst of energy to push you through to the end of your endurance activity. Depending on the workout intensity, you can burn through the glycogen stored in your muscles in 60 to 90 minutes.

It can take some trial and error to figure out the right kind of energy gel and the right amount to take. Some people need only one dose every 7 or 8 miles, while others go hard enough to need one every 5 miles.

But it’s also important to drink water when taking the gel because some gels have a thicker consistency.

When should I use energy gels?

Your body’s glycogen stores last 60 to 90 minutes, so any workout shorter than 60 minutes likely won’t call for a gel.

When running/riding/racing for longer than 90 minutes, start eating a gel every 15 to 30 minutes or 5 to 7 miles. You don’t want to wait until the 60- to 90-minute mark. It takes time for your body to digest the gel.

Adjust the time interval between gels as needed. If you’ve spent enough time training with the gels, you should have a pretty good idea of how often you need to take them. Drink water every time you eat a gel (unless it’s a waterless gel).

Can I make homemade energy gels?

You can find recipes for DIY energy gels via a general Google search. They typically contain pureed fruit or dates along with some honey or another sugar and salt. If you can stomach molasses, it’s a good sugar source that includes potassium, an important electrolyte.

Storage tends to be more of an issue with homemade gels. They need to be refrigerated or frozen until used. And expect them to be sticky, which means you’ll have to get creative when you’re on the go.

What are the best energy gels for cycling?

The best energy gels for cycling are the same gels that work for other endurance sports. The longer the race, the more gels you’ll need. If it’s hot outside during your event, a gel with electrolytes can help with hydration.

As in other sports, a gel with some protein, amino acids, and BCAAs can promote muscle repair. It’s less about what you’re doing and more about what your activity is doing to your body. Your body doesn’t care whether it’s burning glycogen by running or by cycling — it just knows it needs fuel.

Though it will take a few trials with different energy gels to find your favorite and most effective, consider the following when making your choice.

Most people burn through the stored glycogen in their muscles within 60 to 90 minutes, depending on their size, speed, and fitness level. To replace that glycogen, look for gels with around 100 calories and 20 grams of carbs.

Sugar sources vary from maltodextrin to honey or tapioca sugar. Some have two sources of sugar to increase the number of channels through which the energy gets absorbed.

Energy gels are all fairly similar except for a few tweaks between formulas.

Braverman says, “Decide whether you just need energy or whether you also want your gel to contain electrolytes and other nutrients. Some nutrients added to sports gels in addition to electrolytes include amino acids and antioxidant nutrients, such as vitamin C.”

A little protein in the gel can help with muscle recovery too.

Durney suggests trying out different energy gels early in training to find what works for you. Try them during your workouts to see how your stomach responds. Some formulas might not go over well, and you want to know that before you’re in a race.

“I personally haven’t had one that I thought tasted really great, so I pick the least offensive one. You certainly don’t want something that is hard to get down when you’re on the trail or in the middle of a tough workout,” says Braverman.

The pouch should be easy to store, open, and carry until you can dispose of it responsibly. This is another reason to try out the gels before race day, especially if you’re a cyclist and need a pouch that’s super easy to open.

You need energy gels only for workouts or races more than 60 to 90 minutes long. You’ll consume a gel every 15 to 30 minutes, depending on how quickly you burn energy.

Look for a gel that contains the nutrients you want. Do you want only energy (sugar/carbs), or do you want electrolytes for hydration or caffeine for an added jolt of power?

Test out the gels before race day to prep for any reactions. Some people alternate between caffeinated gels and regular gels to save their stomachs, for example.

Above all, stay hydrated. Most gels require some water to dilute their high concentration of sugar (and prevent bloating and cramps).