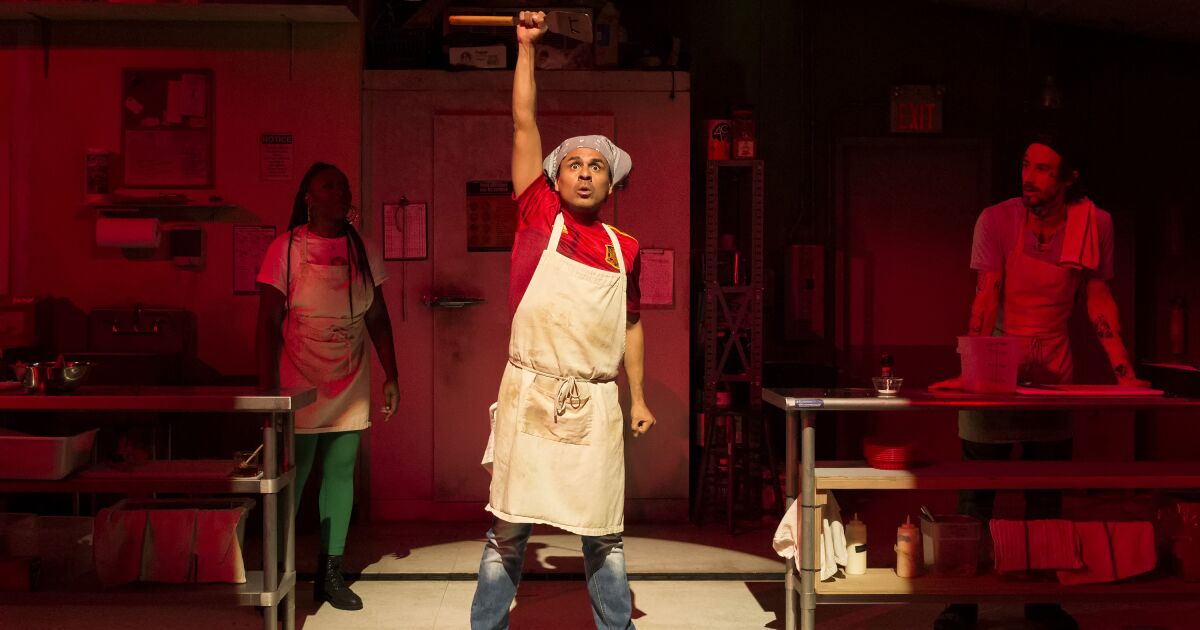 Almost everyone loves a good sandwich. They are simple, by definition, but come in endless sizes, shapes and variations. Pretty much any ingredient can be incorporated into one, but not every combination works well. There is inherent structure but they can be as chaotic as one dares to dream.

They are a perfect device, in other words, to discuss life, loss and love. In Lynn Nottage’s play “Clyde’s,” which runs at the Mark Taper Forum through Dec. 18, the quest for the perfect sandwich is the throughline on a journey that pits formerly incarcerated kitchen workers at a modest sandwich shop against the vicious Clyde (played by Tamberla Perry), who runs the place, in a darkly comic battle.

The play features detailed — highly detailed — and fantastical descriptions of different sandwiches, often spoken by characters like a recitative, lost in ideal flavor combinations: A tuna melt with chopped lemongrass and basil on toasted black rye; Maine lobster on a potato roll with truffle mayo, caramelized fennel and a touch of dill; sauteed skirt steak with peach chutney on a cheddar biscuit.

If you’re salivating while reading these descriptions, that’s the point. Those, and others, punctuate the action of the play in which the kitchen workers struggle under the thumb of Clyde, the unforgiving (but very well-dressed) woman who makes their lives hell. The sandwich reveries are a way for the workers to escape Clyde’s abuse but also take on a deeper significance about redemption and starting over.

Nottage, the two-time Pulitzer-winning playwright, happens to enjoy a good sandwich, as you might guess. “I like that it’s an ordinary, ubiquitous food that when mastered could have extraordinary culinary outcomes,” Nottage says. “I like that it lends itself to invention.”

As a kid, Nottage would eat sandwiches prepared by her father, who was an enthusiastic devotee of the form. “My father, being the kind of adventurous cook that he was, always endeavored to make something slightly unusual,” Nottage says. And some of her father’s joys did not necessarily translate well to the school lunchbox — like a jiggly hunk of head cheese.

“One of his favorites was, like, liverwurst and pickles,” she says. Was that also Nottage’s favorite? “It absolutely was not,” she says, laughing.

And even though it sometimes meant Nottage couldn’t trade sandwiches with the other kids at school, the care and attention was what was important. “I think his creativity and relation to food was very much about expressing love,” she says.

One of the characters in “Clyde’s,” a man named Montrellous, is something of the wise sandwich sage of the production: A kind teacher to the other cooks in the kitchen, creative and self-realized in his technique and ingredient selection. “There’s some of my father’s DNA in Montrellous,” says Nottage.

“Clyde’s,” which an American Theater magazine survey said would be the most produced play of the 2022-2023 season and Nottage the most produced playwright, demands a lot of food prep and assembly from its actors. It’s a layer of complexity most plays don’t have to deal with. (L.A.-based chef Notasha Butler is credited with making specialty sandwiches for the production.)

Having such a food-intensive show “adds a week of rehearsal,” the production’s director, Kate Whoriskey, says. Actors have to learn knife skills. Not only that, but the characters’ knife skills have to improve over the course of the play.

“You have to say this monologue and make sure the tomato gets cut by this point,” she explains, and if something goes wrong — like a stray tomato — it can throw off the whole show.

Whoriskey, who once worked as a server, praised the simplicity of the sandwich, saying, “Restaurants that have Michelin stars are often excluding a lot of people. Sandwiches are something that everyone has access to.”

She says one of her personal favorites was a soft shell crab sandwich with sriracha mayonnaise. Nottage, for her part, says she loves a classic grilled cheese cooked in a cast iron skillet. Which makes sense — a grilled cheese happens to be the first sandwich mentioned in the show.