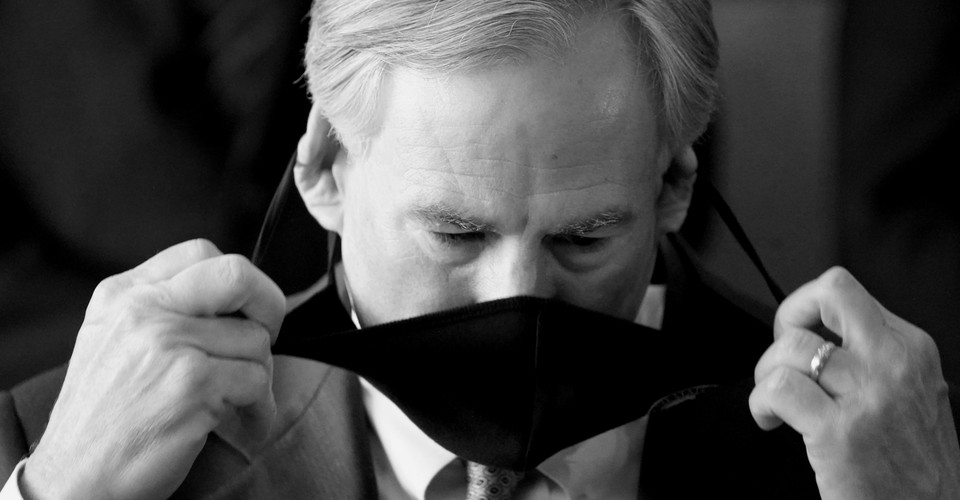 Governor Greg Abbott of Texas is not only fighting a COVID-19 infection—he’s also on the front lines of a clash within conservatism. The Republican has declared his state “the Freedom Capital of America.” He has consistently prioritized cutting regulations on business, and in a 2018 opinion column boasted, “Innovation and self-reliance are deeply rooted in the Lone Star State, and when freed from the stranglehold of over taxation and overregulation, new ideas flourish. By limiting senseless government restrictions, the opportunity to succeed in business is as limitless as the land itself.”

The pandemic has given Abbott new avenues to push for freedoms. Abbott has, for example, barred state agencies and organizations that receive state funding from requiring vaccines for consumers. “We will continue to vaccinate more Texans and protect public health—and we will do so without treading on Texans’ personal freedoms,” Abbott said in a statement in April.

The public-health wisdom of this position is dubious, but it is consistent with the idea of limiting government restraints. What’s confusing is a bill that Abbott signed in June, which bans businesses from requiring customers to be vaccinated. With rising concern about, and case counts from, the Delta variant, the state Alcoholic Beverage Commission issued a warning on August 12 declaring that restaurants and bars that ask customers to show proof of vaccination might have their liquor licenses revoked.

Politicians who ban mask mandates and vaccine passports are not actually anti-government, as it might seem, but simply have a different view about how government should wield its power. Texas Republicans are caught between maximizing personal freedom (such as the freedom of patrons to vaccinate themselves, or not, and go to any business) and remaining opposed to government mandates on business (such as allowing private establishments to run their own affairs, “freed from the stranglehold” of regulation). Forced to choose between their stated commitments to individual and business freedom, Abbott and his allies in the state legislature chose individuals.

Although competing visions exist for where the conservative movement should be headed, they share a common bedrock: defending and expanding liberty. The tension that the coronavirus pandemic has uncovered is between what kinds of liberty to defend, and for whom—a conflict that pits the freedom of people to choose whether they are vaccinated against the freedom of others to avoid sharing private spaces with the unvaccinated.

“It’s wild to see conservatives hankering to place restrictions on private business,” Nicholas Bagley, a law professor at the University of Michigan (and an Atlantic contributor), told me.

The clash here is not merely a split between the traditional progressive focus on liberty as the ability to achieve one’s potential and the conservative emphasis on negative liberty, or the lack of restraints imposed by government on citizens. (Of course, the conservative movement has not always extended this devotion to negative liberty to everyone, especially LGBTQ people and those wanting an abortion.) Contemporary American conservatives have followed a small-government philosophy and have tended to treat negative liberty as something that applies equally to individuals and to groups of them: “Corporations are people, my friend,” Mitt Romney said in 2011. Conservative judges have issued rulings that have extended protection of religious freedom and free speech, in the guise of political giving, to corporations. COVID-19 has shown, once again, that individuals’ and corporations’ interests are not always aligned.

This split comes amid a broader tension between American businesses and conservative politicians. In recent years, a growing number of corporations have spoken out on social issues, including support for LGBTQ rights and voting access. These positions are not necessarily signs that big business has transformed into “woke capital,” as some conservatives claim; rather, they represent entrepreneurs making judgments about what is best for their bottom line, having considered the views of employees, investors, and companies. Republican politicians—most prominently Mitch McConnell—have howled with anger that companies are criticizing them after years of the GOP serving business interests.

But Texas’s anti-vaccine-passport law, and those like it in other states, show that the betrayals cut both ways. Seeing putatively hard-line conservative governments leap to place restrictions on businesses—especially regarding a question so fundamental as the health of entrepreneurs and their employees—could very well make business interests question the strength of their long-standing alliance with Republicans. Put differently, in the new paradigm, businesses might be sorted by their COVID-19 politics, not by the mere fact of being a business.

The pandemic has also sharpened an existing hypocrisy within the Republican Party over the importance of local control in government. As I wrote in 2017, growing GOP power in state capitals and more uniform liberal control in urban areas have created an inversion of traditional views about federalism. Liberals have come to view municipal government as a key center for progressive reform, while Republicans have become skeptical of their long-held devotion to local control and have enjoyed exercising state power to smack down city-level gun control, living-wage laws, fracking bans, and more.

COVID-19 has supercharged this tension. First came a round of clashes about mask mandates last summer. Liberal and liberal-leaning cities such as Atlanta, Houston, and San Antonio sought to require people to wear masks in public spaces. Conservative state governments passed laws or enacted executive orders preventing people from doing so. This is, once again, a valid exercise of governmental power, if not a wise one. But it is hardly a restrained one, and conflicts with the traditional conservative view that local populations know how to govern themselves best. Instead, these Republican officials once again decided that individual freedom was the more important value.

David A. Graham: The battle for local control is now a matter of life and death

We’re now witnessing a reprise of this battle, especially centered on school districts. Education is another complicated space for federalism. Across the U.S., some choices are typically left to local authorities while others are controlled by the state. For example, all 50 states have laws requiring vaccines for some illnesses. In Texas, a legal battle is ping-ponging among courts over Abbott’s ban on mask mandates, and local officials in San Antonio have announced that they will mandate masks and require teachers and staff to be vaccinated, notwithstanding the governor’s orders. In Florida, some school districts say they will attempt to mandate masks, despite a ban from Governor Ron DeSantis, also a Republican. The DeSantis administration threatened to defund districts that defy the ban and dock the pay of superintendents and school-board members who impose mandates, but later acknowledged that the state has no such power.

Progressive responses to the loosening conservative commitment to local control and business deregulation have varied. President Joe Biden said Wednesday he would authorize the Department of Education to take legal action against states that block COVID-19 precautions. The liberal law professor Laurence Tribe wants to see the federal government step in to sue states on behalf of parents—a classic exercise of federal power.

In other cases, liberals find themselves in the unusual position of defending business against government interference. That is an outlier in recent political history, during which liberals have more often wanted government to force businesses to accept customers, as in the Masterpiece Cakeshop Supreme Court case, which involved a baker who declined to provide a cake for a same-sex wedding, citing religious views. Yet though religious-freedom carve-outs and vaccine-mandate opposition appear to flow from a similar sense of conservative persecution by the culture at large, the comparison is superficial. Businesses are legally permitted to discriminate among customers all the time—for example, against patrons not wearing shirts or shoes—and are barred from discrimination only along certain lines, such as race. The case for treating people who decline COVID-19 vaccines as a protected class, alongside historically disadvantaged groups, is flimsy, especially because transmission of the virus, unlike gender or sexual orientation, is a threat to others’ health.

Meanwhile, some conservatives are having second thoughts about the decisions they made earlier in the pandemic. This month, Governor Asa Hutchinson of Arkansas, a Republican, said he regretted signing into a law a ban on local mask mandates. “Whenever I signed that law, our cases were low, we were hoping that the whole thing was gone, in terms of the virus, but it roared back with the Delta variant,” Hutchinson said. The governor and Republican legislators ignored a core principle of conservative political philosophy: to beware of changes to government that might have unforeseen consequences.

Hutchinson publicly pleaded for courts to invalidate the law. In early August, he got his wish when a judge blocked enforcement of the mask ban, saying it infringed on the rights of the governor, local health officials, and the state supreme court. If conservatives have to depend on the courts to restrain their own hands from unwise government impositions, what claim do they have on being conservatives?