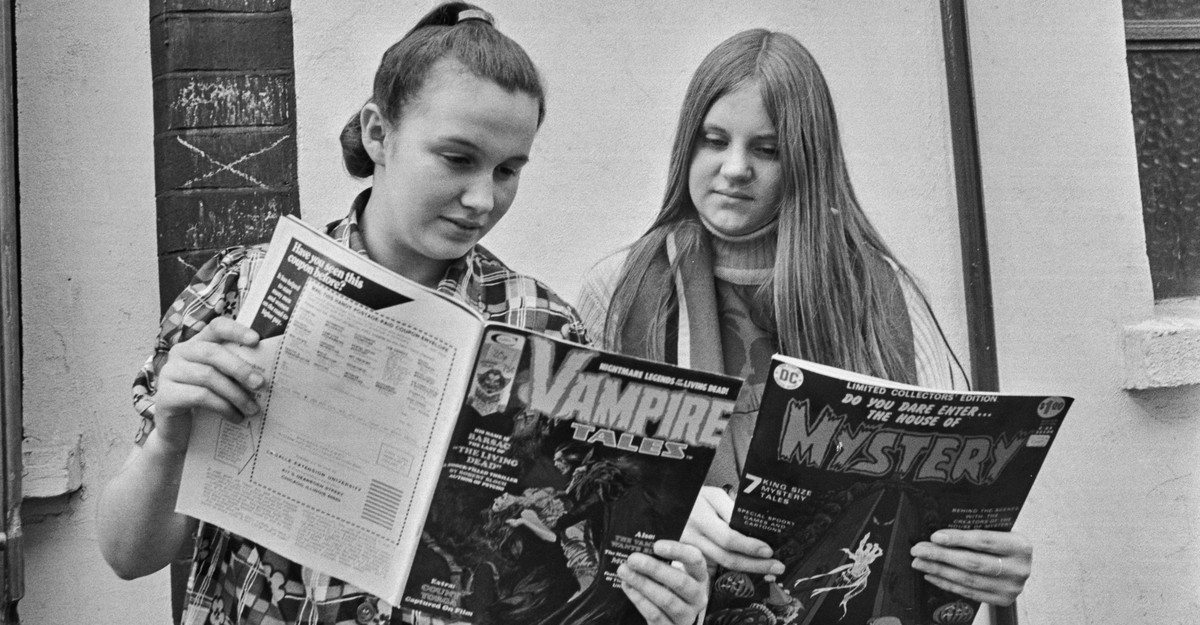 In the past decade, comic books have perhaps been best known as the inspiration for sprawling film and TV franchises—but they are still, well, books. After years of work and advocacy from the likes of the Marvel mastermind Stan Lee, comics are no longer perceived as unsophisticated kids’ entertainment; instead, they’re a respected storytelling format—not to mention homes to gorgeous artwork. They’re cultural cornerstones, enough that collections of Black Panther, Captain America, and The Amazing Spider-Man issues are being republished as Penguin Classics.

This doesn’t mean comics have stopped changing and developing over time. Modern story lines revisit and reevaluate classic characters, while new series push the form even further. In 2018, the Batman writer Tom King put a familiar hero in a vulnerable place, investigating his feelings through an attempted wedding between the Caped Crusader and Catwoman that demonstrated the sacrifices that being a superhero requires, and what that means for their relationships. The epic Saga uses familiar character tropes and archetypes, but its characters have diverse identities and backgrounds, and it incorporates heavy topics like war and bigotry into its story lines—all while maintaining a core focus on love and family. Tillie Walden’s On a Sunbeam removes one common comic-book feature entirely: men. She also offers little exposition on the rules of her futuristic world, choosing instead to immerse readers in the story as it unfolds, presenting interplanetary conflicts and boarding-school antics.

Authors have also adapted nonfiction and memoir into visual media. In her graphic novel Seek You: A Journey Through American Loneliness, Kristen Radtke explores the history, study, and experience of loneliness. It was published in the second year of the pandemic, when there had already been plenty of discussions of what happens to humans when we are isolated from one another. By presenting these solitary moments in drawings, Radtke reminds us that these experiences are universal—and that they can bring us together instead of pushing us away from one another.

​Every Friday in The Books Briefing, we thread together Atlantic stories on books that share similar ideas. Know other book lovers who might like this guide? Forward them this email.

Melville. Faulkner. Spider-Man.
“And so the best argument for these particular selections from the archives as classics—in their fullest possible embrace, not just with the fig leaf of ‘historical influence’ or ‘marginalized genre’ or ‘come on, half the international box office comes from these three characters’—derives from the way in which these stories, in this visual medium, continue to dazzle visually.”

Batman, Catwoman, and the marriage plot in comics
“Up until now, their will-they-or-won’t-they relationship was based on an assumption at the core of comic books: A hero and a villain can’t be together, because they live on opposite sides of the law. But in drafting a wedding plot over the last year, the writer Tom King has upended tradition by trying to pursue something novel for two of comics’ most iconic characters: personal growth.”

The sprawling, empathetic adventure of Saga
“Amid its characters’ imperfection and even dysfunction, Saga always returns to heartwarming themes: finding and building family, and earning redemption through forgiveness and love.”

An intergalactic tale populated by women
“With On a Sunbeam, Walden has created a science-fiction universe that is about women, queer love, old buildings, and big trees. It may piss off science-fiction purists.”

📚 On A Sunbeam, by Tillie Walden
📚 The Power, by Naomi Alderman

Why do we look down on lonely people?
“Through vivid images of people fumbling with house keys late at night, falling asleep on the subway, leaving a liquor store, Radtke shows how recognizable and universal loneliness is—but also how easy it is to remove ourselves from others’ loneliness, to turn theirs into an experience incompatible with our own.”

📚 Seek You: A Journey Through American Loneliness, by Kristen Radtke

About us: This week’s newsletter is written by Elise Hannum. The book she’s reading next is Everything I Need I Get From You, by Kaitlyn Tiffany.