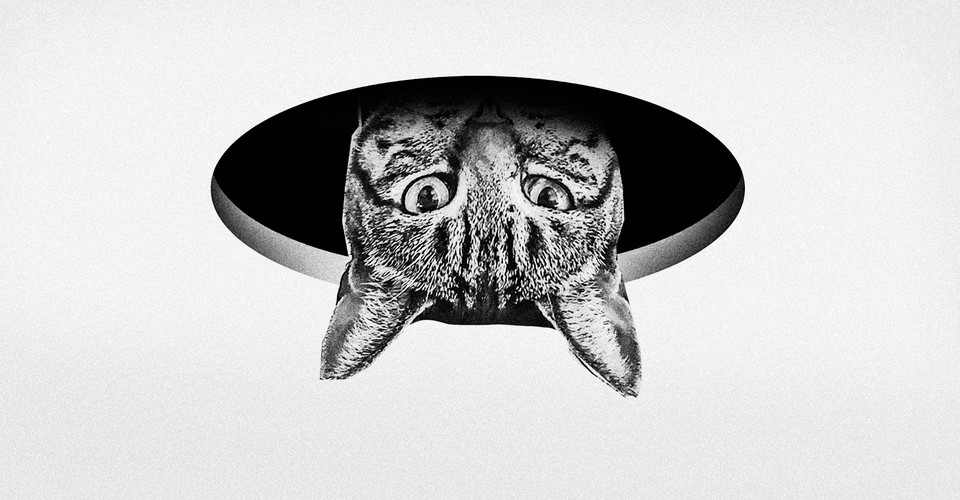 On April 30, 2021, after four months in the ceiling, Eliza Schuyler Hamilton, a cat, spent what I thought would be her last night among the dust bunnies. At first, it had been strange to be haunted by a small, hairy ghost who loved to yowl right into the heating ducts. But soon it became almost routine. Some people have mice in their walls. I had a cat in my ceiling.

Now I had laid a trap. I would wait patiently until she emerged to investigate the meows of my other cat, then slam closed her access to the ceiling using a cleverly rigged pulley system. She’d be truly stuck.

Eliza cautiously poked out her head. Then one paw. Giving me a wide berth, she began trotting up the stairs. I pounced.

The cat came shooting back, hopped onto a window ledge, and wriggled up into a three-inch gap between the window and a drop-ceiling tile.

This was one of several nights when this tabby drove me to tears. My attempt to adopt a stray cat had gone horribly awry.

I’d brought in Eliza out of a potentially misplaced sense of duty. I’m working on a book about pests—animals that cause us trouble. Outdoor cats cause plenty of it. Studies peg their damage at a minimum of 1.4 billion birds and 6.9 billion mammals killed in the United States every year. As I wrote about the need to keep cats indoors when possible, I thought I should practice what I preach.

At the end of December, my neighbor came pelting into my yard with a trap holding a cold and extremely terrified Eliza. When we released her into the basement bathroom, the ragged tabby raced up the stairs and thoroughly destroyed the kitchen, before huddling back under the bathroom sink in a space so narrow that no one could reach her. I left food, water, litter, and treats, and gave her time to gather herself.

The next day, the bathroom was empty, and the ceiling was meowing at me.

From the beginning, I knew Eliza would be tough to tame. She was, at my vet’s best estimate, about 5 years old; the ideal window to “socialize” cats to humans is between “five to seven weeks, really early and really narrow,” Julie Levy, a veterinary scientist at the University of Florida, told me. She has seen plenty of exceptions—cats that got their first taste of canned food at 16 weeks and decided they were all about that indoor life. Adult strays might chill out around the person who tames them, but they won’t ever warm to humanity as a group. “It’s not like the cat says, I like people now,” Levy said. “It’s like, Okay, I like you now.”

Eliza also had a trimmed ear and a microchip that testified she had been trapped, neutered, and returned to her life on my neighborhood’s lawns and porches. That probably meant she hadn’t shown the open friendliness and inquisitiveness that might have led her to a shelter. But I had confidence, canned food, and catnip. And, with COVID-19 keeping us all isolated, plenty of time.

Read: Pay no attention to that cat inside the box

Once in the ceiling, Eliza quickly settled in. Every night, she would descend to use the litter (though one ceiling tile paid the price of a desperate feline bladder). I spent hours in the basement, putting out choice treats and sitting as still as I could, listening to her slide cautiously along the ducts. I took French lessons and tried to learn to meditate. I read aloud to her, trying to get her used to the sound of my voice. Eventually, she would come down, giving in to the temptations of tuna juice. But at the slightest sign of movement, she’d scramble back into the ceiling, to glare down at me from the grates.

Over a few weeks, Eliza would get bolder, even going so far as to sniff my shoe. Then I would try to close off the ceiling, and all trust would be destroyed. As the months passed, she seemed to get more and more skittish.

I tried more time with her. I tried less. I tried pheromones, anti-anxiety drugs in her food, toys. I asked every cat owner, animal behaviorist, ecologist, and veterinarian who would listen for advice. At one extreme, someone suggested that I kill the cat; at the other, that I install walkways eight feet up around the house so that she could live her best ceiling life.

As the months wore on, Eliza’s wariness and glaring began to feel like an indictment. Other cat owners, it turns out, know how I felt. Rebecca Evans, a psychologist at the University of Liverpool, in England, has found that many cat owners anthropomorphize their pets’ actions—they might describe poor behavior in terms of “seeking revenge,” for example. If owners perceive a cat as “agreeable,” or more extroverted, Evans has also shown, they liked it more, while “a more neurotic cat predicted lower owner satisfaction,” she told me. What was Eliza, if not extremely neurotic?

And I did impose my emotions on her. I saw her shyness and withdrawal, and figured that she didn’t like me. My “owner satisfaction” tanked. Her dark-brown stripes took on a rough look, to my eyes. Her face was constantly suspicious and ill-tempered. I didn’t want her hunting outside. But what we had wasn’t working for either of us.

By the end of May, Eliza needed to come out of the ceiling. I was very tired of living in the early-2000s meme of “ceiling cat,” and also she had a vet appointment. I was giving up. After the vet took care of her potentially infected teeth, she’d be going to a rescue, where they might try her as a working cat, hunting mice or rats in a barn somewhere. I hoped. I had tried everything. But this cat didn’t want to be my cat. And I had finally learned I could not force her.

Eventually, I was able to trap her in a carrier and drop her off for surgery, with acute feelings of failure. But as I drove away, the vet called. Eliza’s mouth was worse than we’d thought. Photos showed brown, oozing abscesses and rotting teeth. Surgery was going to be expensive. Knowing my plan, the vet tech paused. “Why don’t you just come get her, and give her up,” she said. “Let them pay for it.”

I wrestled with my conscience. I assumed that if I gave her up, Eliza’s days would be numbered. Maybe that would be a good thing. A quick death, instead of life on the streets or in a barn. But even though she drove me crazy, I loved her valiant little soul. I told them to go ahead. That afternoon, a groggy, extremely medicated tabby came home with three tiny teeth left in her entire feline head.

Read: One more thing we have in common with cats

The Eliza I brought home was not the same cat. Even after the pain medication wore off, this cat wanted to be petted. This cat loved to be brushed. She paraded around my legs, tail high, head-butting my hand. She tried to love-chew my fingers with her toothless gums, squeezing my skin with what felt like damp Silly Putty. We canceled her appointment with the shelter.

This cat wanted to be my cat. And I realized what I had been missing. This human-cat relationship had been dominated by my feelings and my interpretations of her behavior—what I saw, what I wanted, and what I thought I could control. There had been no cat in it at all. But when dealing with an animal with its own experiences and drives, control is an illusion. All you can really strive for is understanding.

Only after I took her to the vet could I see what her withdrawal really signified—terrible, head-crushing pain. Cats’ facial expressions are tough for people to read, but they do show signs of pain, Daniel Mills, who studies veterinary behavioral medicine at the University of Lincoln, in England, told me. “ A tightening of the muzzle, basically,” he explains. “And an opening of the eyes.” Eliza’s eyes had usually been narrowed to suspicious slits. That narrowing “indicates quite a lot of acute pain,” he said.

Sure enough, when I found another paper describing feline pain for veterinary practitioners, Eliza could have stood in for Figure 7: ears flattened forward, eyes half shut, and a muzzle that took resting cat face to a new level.

Vets are traditionally trained in acute pain, Mills added. Prod a cat’s broken leg and “you’re gonna get bitten.” Chronic pain is tougher to see, and many cats deal with it by withdrawing. Eliza’s unwillingness to soften to my overtures made me see shyness as aloofness, withdrawal as anger. Taking away her pain showed me that these emotions had everything to do with me, and nothing to do with her.

Now Eliza has freedom of the house, and she is bolder every day, attacking scratching posts, destroying cat toys, and running for her favorite treats. Is she happy? She can’t actually tell me. But her whiskers are forward, her coat is shiny, and her purr is loud. “We can only evaluate based on what we see and not what they are,” Evans said. All I can do—all any cat owner can do—is meet my cat’s needs, try to find understanding, and not place my feelings where they don’t belong.

At least, so far, she’s shown no more interest in the ceiling.