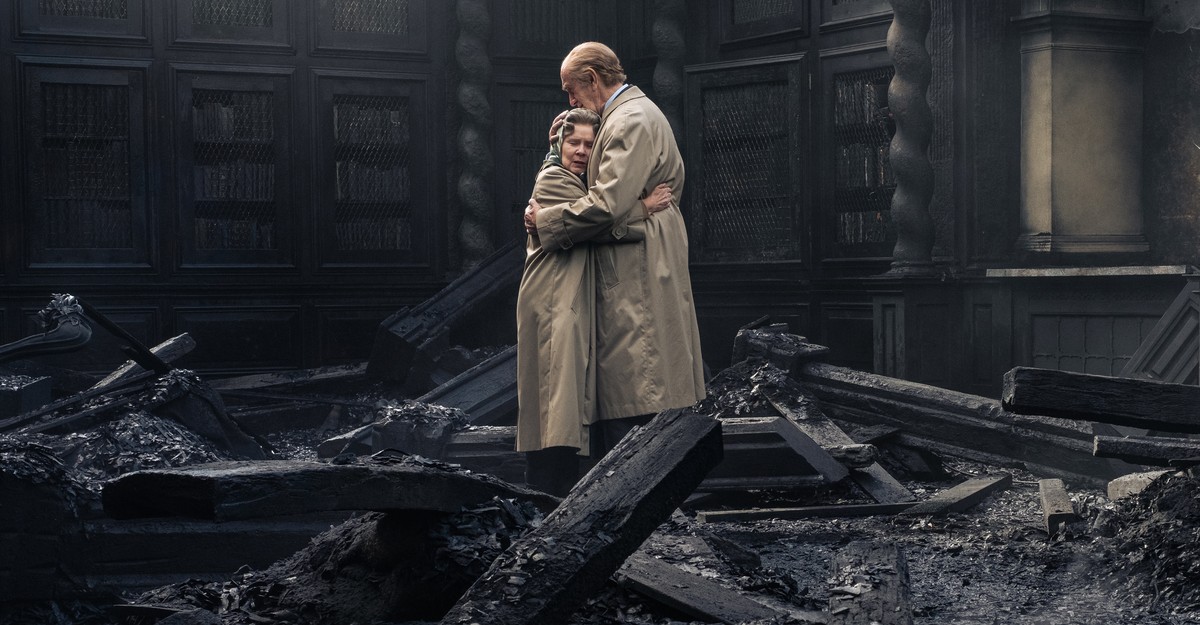 The Crown has never been a straightforward drama series. Like its central figure, Queen Elizabeth II, the long-running Netflix show juggles two roles at once. The first is to provide a sumptuously staged history lesson of key moments in the United Kingdom’s past; the second is to offer a behind-the-scenes study of the royals’ relationships with one another. For four seasons, the creator, Peter Morgan, has deftly blended fact with fiction and truth with gossip, arguing that the family’s personal lives are inextricably linked to the country’s national identity—for better or for worse.

Members of the royal family and their allies, according to reports, have never been ardent fans of the show. And as The Crown launches its newest installment only months after the Queen’s death, they seem more concerned than ever. Season 5, which started streaming this week, depicts the tabloid turbulence of the 1990s, including the breakdown of Charles and Diana’s marriage and various related scandals, such as “Tampongate” and Diana’s BBC interview with the now-disgraced journalist Martin Bashir. In the weeks leading up to the season’s release, Prince William reportedly complained about the series, the former Prime Minister John Major criticized the show’s inaccuracy, and even Dame Judi Dench called for Netflix to add a disclaimer, writing that The Crown is “cruelly unjust to the individuals and damaging to the institution they represent.”

As it turns out, they needn’t have worried so much. Yes, the balance that the show long maintained has tipped in favor of portraying the melodramatic turmoil within the family, but it’s done to tepid effect. Even with an impressive and capable new cast anchoring the proceedings, Morgan’s approach to the personal lives of the royals is too sympathetic to ever be damning. The new season of The Crown never risks challenging anyone’s reputation. Instead, it merely risks its own as a compelling show.

A season about the most salacious era in recent royal history shouldn’t feel so sedate. Yet, again and again, Season 5 pulls its punches. In the second episode, Diana (played by Elizabeth Debicki) secretly participates in Andrew Morton’s explosive biography of her, but rather than interrogate the family’s response to her revelations, the hour ends with the book’s publication. The fifth episode devotes considerable screen time to reenacting the embarrassing “Tampongate” phone call between Charles (Dominic West) and Camilla (Olivia Hamilton)—a leaked conversation during which Charles expressed his desire to turn into, well, a box of Tampax so he could “live inside” his lover’s trousers.

But just as the show starts to examine the consequences of the future king’s carelessness, it cuts away to a scene of him delivering a speech on behalf of his charity. These baffling moves soften any potential blows and prevent the show from pursuing more provocative threads: how the royals are insulated from public humiliation, how Camilla’s and Diana’s reputations were damaged in comparison with Charles’s, how sex as a subject was received differently by the family than by the public.

This reluctance yields the show’s most inelegant and inconsistently paced season yet, recycling familiar themes while sacrificing the character development it has so carefully honed since its debut in 2016. Philip (Jonathan Pryce) in particular languishes from muddy writing: In one episode, he vehemently supports every decision Elizabeth (Imelda Staunton) makes; in another, he’s spiteful, rehashing his grievances from seasons past about needing to have his own separate interests.

The Crown has firmly established Philip and Elizabeth as one of the royal family’s most durable marriages, yet it can’t help but repeat the same conflicts. Even Philip’s unexpected friendship with the young Penny Knatchbull (Natascha McElhone), the wife of Philip’s godson, goes nowhere; The Crown drops the story line just as it begins to make a point about the restlessness that comes from spending decades as a consort. The series struggles too with offering more insight into Elizabeth: The season is bookended by episodes about her beloved royal yacht, the Britannia, being decommissioned, but—with apologies to the late Queen—the retirement of a ship does not make for the most interesting television. All it becomes is a far-too-obvious metaphor for the monarch’s age.

[Read: After the Queen, what is Britain?]

Two years ago, I praised the series for finally taking a stance and criticizing the Queen. The show used its invented scenes to illustrate how out of touch she was with the rest of her family, and how her ignorance reflected the institution’s own stuffiness. The approach gave the fourth season shape, and the historical moments it reproduced felt carefully chosen to show the monarchy’s difficult pursuit of modernity. The fiction, in other words, served the facts.

The Crown is now more of a soap opera than ever before. The new season includes plenty of theatrical moments, from Charles and Diana meeting to achieve closure after their acrimonious divorce to a montage of Margaret (Lesley Manville) revisiting the letters she received in her youth from her paramour, Peter Townsend (Timothy Dalton). Yet these scenes feel scattershot. Morgan seems aware that the novelty of watching the royal family’s consistent troubles—their lopsided marriages, their power struggles, their need for the British public’s adoration (and funding)—has worn off, but he can’t think of how else to further the drama other than by meticulously re-creating scandal after scandal and introducing figures such as Diana’s eventual boyfriend, Dodi Fayed (Khalid Abdalla), who won’t play a significant role in her life until the sixth and final season. If anything, The Crown has become like the Queen in her final decades: pristine-looking, dutiful to a fault, and searching for a kind of significance that’s long been out of reach.