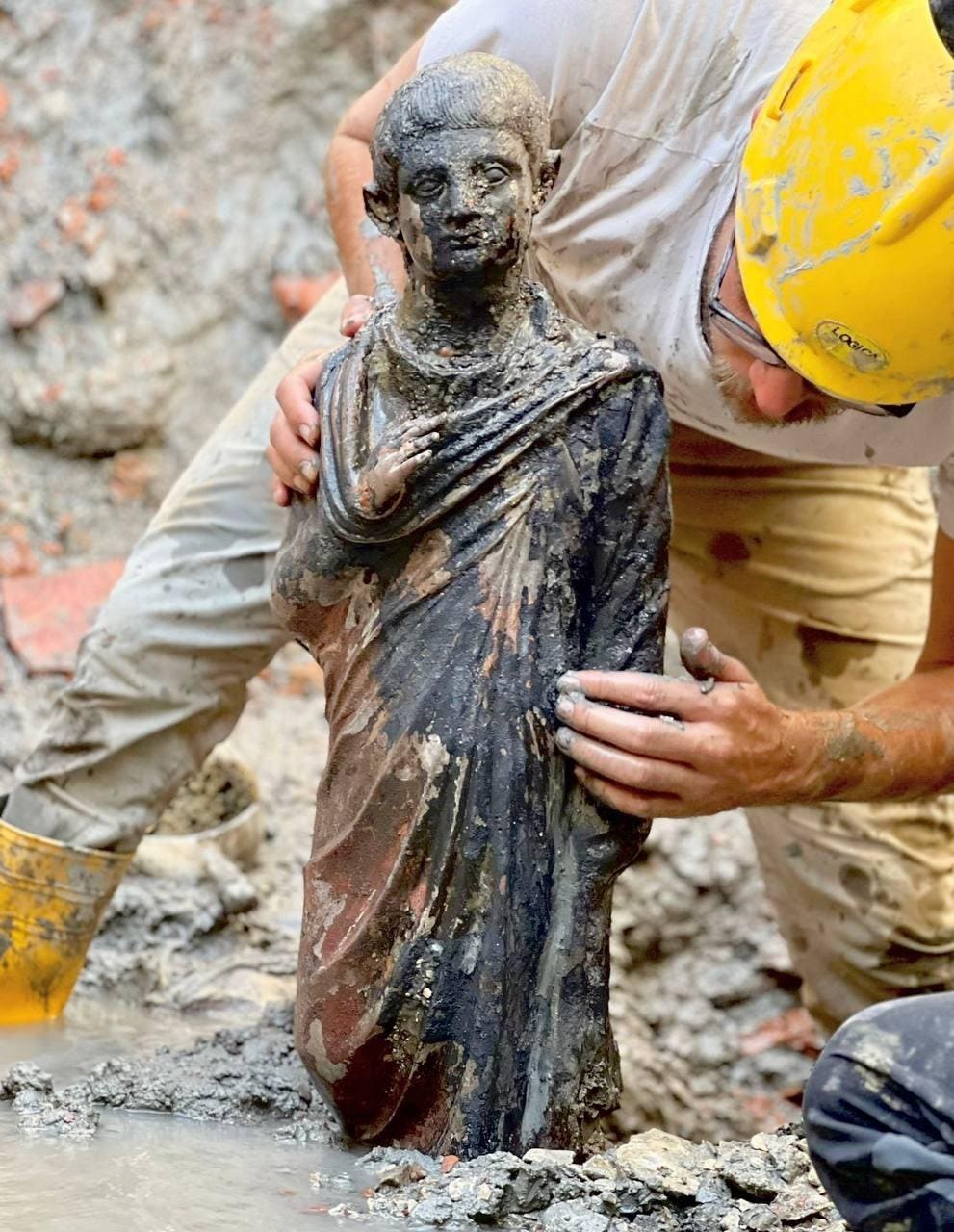 This week, in the town of San Casciano dei Bagni, close to Siena, a discovery of great importance happened: 24 bronze statues were found in a Roman-era thermal pool, close to what was originally a sanctuary. The bronzes, which date approximately between the first and second century AD, were found to be almost completely intact: the thick layer of mud and hot water under which they had remained for centuries contributed to preserving them – to the extent that it’s almost as if they had just been placed there, according to experts.

The discovery was deemed by the chief of the Directorate General for Museums at the Ministry of Culture, Massimo Osanna, “one of the most significant bronze findings ever made in the history of the ancient Mediterranean”. It was compared to the finding, about 50 years ago, of the Riace bronzes, two statues of warriors, presumably sculpted in Greece in the mid-5th century BCE, found in the waters of the Ionian Sea near Riace Marina, in the region of Calabria, in 1972.

Findings of bronze statues are usually quite rare in archaeology: this is one of the reasons why the findings of San Casciano are deemed even more interesting. The excavation that led to the discovery of the statues started in 2019, and it was led by the archaeologist Jacopo Tabolli of the University for Foreigners of Siena. The statues are mainly religious and they impersonate deities, women, and young boys. Some of them portray divinities linked to Medicine venerated in thermal areas by both Etruscans and Romans, such as the goddess of health and cleanliness Hygieia and the god of the medical arts Apollo.

According to Jacopo Tabolli, the sanctuary was active until about the fifth century. After that, it was shut down and the statues placed in the water. It is ‘the biggest deposit of statues of the old times’ ‘, he said. Interviewed by the daily newspaper Il Manifesto, the archaeologist specified: ‘The exceptionality of this finding lies in the fact that despite a flow of 10 liters of water passing each second through this structure, the sacred storage was maintained entirely’.

Tabolli explained how the excellent state of conservation of the statues now grants researchers the possibility to analyze in great depth how they were manufactured and how the metal was molded. The statues also offer a great deal of cultural and linguistic insight: on them, there are inscriptions in both Etruscan and Latin. According to the experts, this tells a lot about the time when they were produced, as between the second century b.C. and the first century AD, the region of Etruria (which today corresponds to parts of Tuscany, Umbria and Lazio) experienced many important transformations, undergoing the passage from Etruscan to Roman domination.

The names of the powerful Etruscan families engraved in the statues, such as the Velimna of Perugia and the Marcni in the Siena region, alongside the quotes of the aquae calidae, the hot springs of the pool, suggest that the taking over of the area by the Romans took place over a long period of time, with a gradual integration between the two communities.

Now, the excavation has been suspended, and it will then restart in the spring. In the meantime, the upcoming months will be devoted to the restoration of the statues. After these operations, the statues will remain in San Casciano dei Bagni: they will be placed in a new museum which will arise in the town, inside a recently acquired palace from the 1500s. The Directorate General for Museums of the Italian Ministry of Culture, which gave the announcement of the creation of the museum, also plans to establish, in the same area, a new archeological complex. This is also going to include the area of the excavation and the old thermal pools.

San Casciano dei Bagni is a destination known for its hot springs, as well as for its Medieval village structure. Close to the iconic sites of Val d’Orcia, Orvieto, Perugia, and the Bolsena and Trasimeno lakes, the town is a strategic passage for a tour in the lower areas of Tuscany, on the way to Rome. Already a destination for numerous archaeology students (in the excavation mission, more than 60 students coming from 11 universities at the national and international level were involved), coming every year for several months to contribute to the study of the old thermal area, San Casciano counts on enhancing the role of the statues to boost its touristic offer too. The museum is deemed to become an important addition to the cultural offer in the area, strengthening the local community and providing relevant additions to the interest areas for the international community.