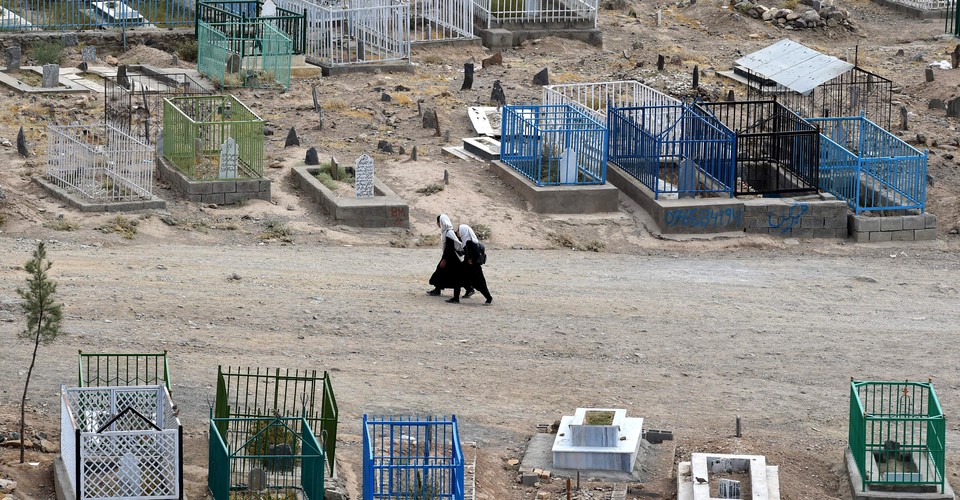 Back in April, The Nation magazine told readers that the withdrawal of American troops from Afghanistan would be “a welcome and long-overdue action.” The essay, by a scholar named Phyllis Bennis, sounded upbeat, even salubrious. It was the liberal case in full: We Americans were a wretched people to have gone there and a depraved people to have stayed for two decades. Some collateral damage upon our retreat was to be expected. We had spent too much time, she suggests, celebrating “the important but tiny gains in human rights won by the small sliver of women living in the cities, while the 75 percent of Afghan women who live in isolated villages and rural areas continue to face the highest level of infant mortality in the world.”

Get the hell out has, of course, been the liberal position for two decades, until about 72 hours ago, when Democrats suddenly became so concerned about the fate of Afghanistan, you’d think they were at a Dick Cheney revival meeting.

You can call for American-troop withdrawal for 20 years, and you won’t be politically or strategically wrong. But you need to be ready to take it on the chin when ​​you get what you ask for and the inevitable happens: girls being forced into child marriage and forbidden to go to school or to leave the house without a male relative.

Is your conscience prickling? Don’t worry, Senator Dianne Feinstein has everything under control. She is “concerned” about at-risk women and girls in Afghanistan. We aren’t abandoning them! They will be covered by the bipartisan Protect Women’s and Girls’ Rights in Afghanistan Act, introduced by Feinstein and Senator Joni Ernst in May.

Do you ever get tired of being lied to? According to this act, America will use the withholding of economic aid and the “voice” of the United States government to protect Afghan women. If the Taliban abuses those women, America will ensure that the militants are brought “to justice.”

Of course everyone behind this grotesque bit of fiction knows what bringing the Taliban to justice would require: the round-the-clock presence of a massive military power. Not the inside voice of Dianne Feinstein. We could not stay in Afghanistan forever, probably should never have gone there in the first place, and were deluded when we thought we could track Osama bin Laden to a cave in the northern mountains. But when nearly 3,000 of your countrymen and women are blown to bits on an ordinary Tuesday morning, you do not take kindly to the nation that welcomed the killers.

That argument has always failed to move many critics of the war. But even so, it’s remarkable how quickly the left took up the cold calculus of realpolitik. How quickly it forgot its love for Malala, the young Pakistani girl who survived a Taliban bullet to the head, her only crime getting an education and trying to help other girls get one too. The White House must have known she’d give Biden a bad news cycle or two, and indeed she appealed to the president to take “a bold step” to stave off disaster. You can understand why she thought he would listen. But she’s not a real problem for Biden. You know why? Because she’s something mere: She’s just a woman. She has no army behind her, no treasure, nothing at all to compel anyone to listen except for her matchless authority on the matter and the fact that morally—if not strategically or politically—she is right.

Here’s the fourth cup of tea: In the next few days, another girl foolish enough to think she can keep going to school will take another bullet to the head, and when that happens, the left is going to lose its mind. Dianne Feinstein is going to be very disappointed in the Taliban, and she is going to use America’s voice to give them an earful. Melinda Gates and MacKenzie Scott will go 12 rounds in Madison Square Garden to determine which one of them gets to fund girls’ education in Afghan refugee camps. The winner will fund beautiful schools—air-conditioned, STEM-centered schools. And there might even be time for the winner to private-jet herself to the Aspen Ideas Festival to explain the importance of girls’ education before those schools are blown up, along with the girls inside them.

We did in Afghanistan what we always do when we have lots of troops, an apocalyptic amount of firepower, and no brief on what to do with them. We killed a lot of people, destroyed a lot of things, and lost many of our own young women and men. We never did find bin Laden there. He had “slipped away,” we were told, as though he was a considerate dinner guest in a Noël Coward play. But while our soldiers were in that country, America spent nearly $790 million supporting the health, education, and well-being of Afghan women and girls. Female life expectancy rose from 58 years in 2002 to 66 years in 2018. Leave American troops idle long enough, and before you know it, they’re building schools and protecting women. We found an actual patriarchy in Afghanistan, and with nothing else to do, we started smashing it down. Contra The Nation, it’s hard to believe that Afghan women “won” gains in human rights considering how quickly those gains are sure now to be revoked. The United States military made it possible for those women to experience a measure of freedom. Without us, that’s over.

The reason—aside from honor, and quagmires, and the tender mercies of Dick Cheney—that we stayed in Afghanistan so long and at such great expense with nothing to show for it except the safety of that “small sliver” of women and girls is that, for all of America’s sins, our default position is freedom. For all of our sins, we are a great country. That’s easy to forget. Last year in this magazine, Barack Obama made what has got to be one of the most astonishing statements ever offered by a former president: “I’m not yet ready to abandon the possibility of America.” That was fast. What happened to “In no other country on Earth is my story even possible”?

For a bewildering two decades we had the political will and a large-enough volunteer military to spend our blood and treasure protecting the human rights of some of the most powerless people on Earth: girls.

In no other country would that story even be possible.