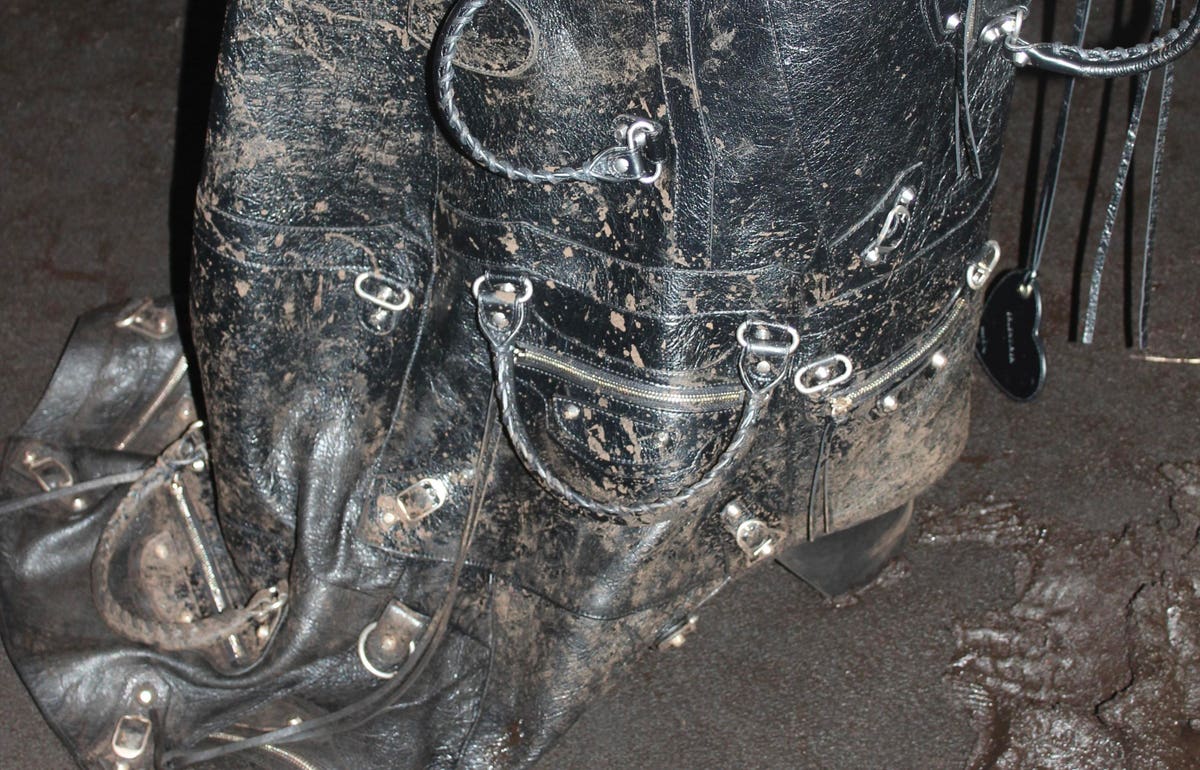 New season clothes treated to look old or, more precisely, exquisitely battered, an ‘old’ as seen through a fashion lens as opposed to the window of the kilo store, with the finishing touches applied during the show with dirt from its mud pit installation curated by artist Santiago Sierra.

But rewind to the theme chosen by parent group, Kering for two exhibitions staged the month before during the Journées du Patrimonie (the September European initiative when cultural sites across the continent are opened to the public free of charge).

The exhibitions at the Group’s Paris rue de Sèvres HQ involved art from the Pinault Collection and a dive into the 900 plus piece Cristóbal Balenciaga archive it established in 2001.

The art show featured work by Belgian artist Edith Dekyndt, focussed on the relationship between humans and the environment. It was center-pieced by a giant textile disinterred after spending months buried in the earth in a wood. Mud was almost definitely involved.

The companion fashion exhibition came from aforementioned archive—specifically highlighting pieces that had also undergone some wear and tear due to environmental factors—albeit not deliberate imposed. It also highlighted the meticulous restoration techniques employed by Kering’s conservationists.

Designers drawing inspiration from their house’s archives is par for the course and Demna is no exception. But while his collections, notably the recently reinstated couture offering, undoubtedly revisit the codes of the Balenciaga archive, there’s also an infinitely bigger picture play. Both literally and tangentially.

And then there was Spring ‘23’s finale showpiece, a leather look constructed from deconstructed black Balenciaga Lariat bags. Barely a week before, the house had launched a resale program with pre-owned platform Reflaunt to underscore its commitment to circular fashion and, no doubt, access a lucrative resale market, which had, hitherto, been operating outside its jurisdiction.

Demna wrote in his show notes that he’d decided to stop explaining his collections and verbalizing his designs, preferring to express a state of mind. “The set of this show is a metaphor for digging for truth and being down to earth,” he said.

It all goes to show how much joined up thinking goes on backstage at the organization to amplify its messaging at all levels—whether it’s immediately obvious or designed to be excavated.