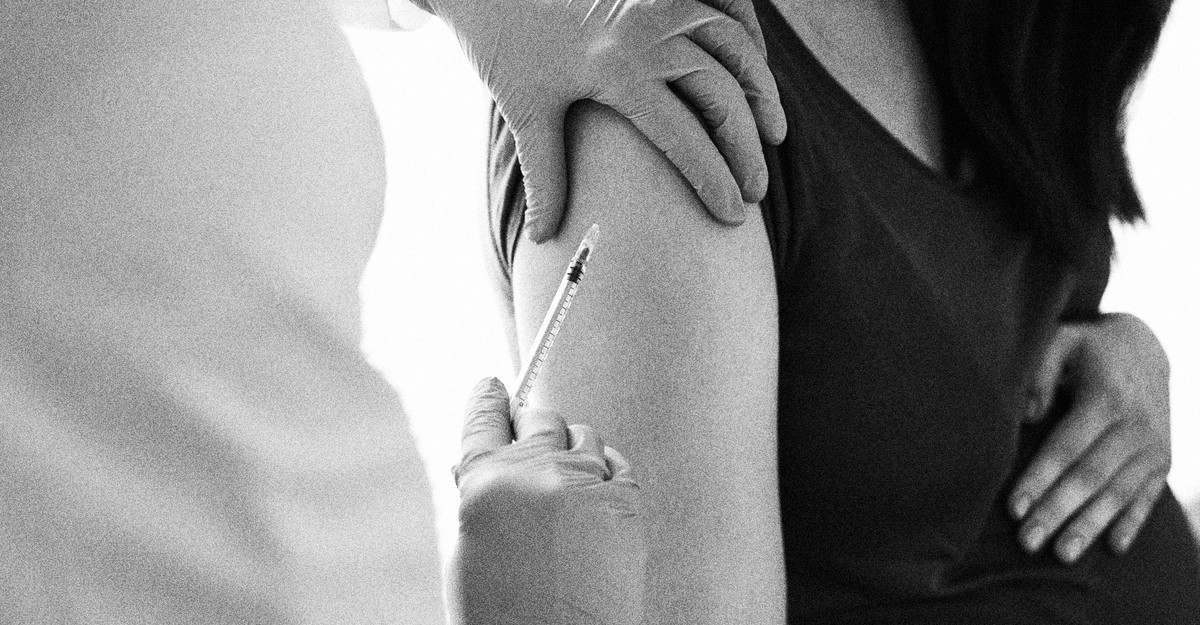 Late last month, the CDC confirmed that two young children had been diagnosed with monkeypox. Although almost all infections in the United States are associated with men who have sex with men, the virus is spreading rapidly and, through household exposure or other transmission routes, could soon turn up in other populations, such as infants, adolescents, and pregnant people (including their fetuses).

Public-health officials recommend the Jynneos vaccine for household contacts of, and others recently in close contact with, people who have monkeypox. But this shot suffers from the same problem as many vaccines developed against emerging infectious diseases: It has never been rigorously tested in people who are pregnant or under 18 years old.

In vaccine research, the usual presumption has been that people who are pregnant or under 18 are uniquely vulnerable to being harmed by medical research. But in many cases, that means that they end up being studied last—and are systematically excluded from the benefits of innovation during epidemics.

Pregnant and lactating women were excluded from early COVID-19 vaccine trials. Although they were still allowed to get shots, only about a third of them were fully vaccinated against COVID-19 by the end of 2021. Many women who were pregnant or planning to become pregnant mistakenly believed, according to one poll, that pregnant women should not get vaccinated. Meanwhile, children under 16 were left out of initial COVID-vaccine trials, and some age groups waited more than a year longer than adults for vaccine approval.

Read: Monkeypox vaccines are too gnarly for the masses

This routine exclusion of vulnerable populations, such as children and pregnant people, in research trials is largely due to paternalistic ethical norms among scientists, who set the standard for the lawyers and ethicists who oversee research regulations. We, however, believe that some important factors—including the harms and inequity of not having proven vaccines during pandemics—are given too little weight. Vulnerable populations are least protected at a time when they are most in need of protection.

This outdated approach means that governments and foundations invest too little in preclinical research, novel clinical-trial designs, and vaccine-development policy and advocacy for pregnant patients and children. As a result, during epidemics of emerging diseases, pregnant patients and children suffer disproportionately, and future generations have a higher burden of disease because of the consequences of infections occurring in utero: birth defects, neurodevelopmental disorders, cardiovascular diseases.

Studies conducted after COVID-19 vaccines became broadly available showed that pregnant women infected with SARS-CoV-2 had a higher risk of serious illness and of losing their baby if they were unvaccinated. Meanwhile, according to the CDC, 1,180 children have died of COVID-19 in the U.S. since March 2020, the overwhelming majority of whom have been unvaccinated.

The harms continue to unfold: Many parents report that they are reluctant to vaccinate their children against COVID-19 because there have been too few studies on children conducted to date. Sadly, a similar pattern played out during Ebola epidemics in West and Central Africa in the 2010s.

Novel and reemerging infections are disrupting the world more severely and frequently than ever before. In the past two decades, three new coronaviruses have profoundly disrupted societies and economies in multiple regions of the world; existing diseases, such as Ebola and Zika, spread from remote, sparsely populated locations to major urban centers around the globe. Although governments, industry, and foundations have invested heavily in the development and deployment of vaccines for Ebola, Zika, SARS-CoV-2, and other pathogens, these research initiatives have generally left out children and pregnant people.

Read: What should worry most Americans about our monkeypox response

In 2019, the FDA approved the Jynneos vaccine, which is designed to protect humans against two related poxviruses (smallpox and monkeypox) and to have fewer side effects than the original smallpox vaccine. At the time of the decision, studies in animals had shown that Jynneos protected against infection; studies in nonpregnant adults showed that it caused an increase in antibodies that was believed to be sufficient to protect against infection. The primary target for the vaccine at the time was people working in laboratories on viruses related to smallpox, but the U.S. government still placed an order for millions of doses of the vaccine in case of a wider smallpox outbreak. In such an event, children would be among the most vulnerable to disease, and fetal complications would be expected in a smallpox or monkeypox outbreak. Nevertheless, the government did not require the manufacturer to formally study the vaccine in these populations.

We believe that the government and the biomedical industry need to work together to shift the paradigm for vaccine development to one in which children and pregnant and lactating patients are prioritized throughout the process—from early-stage research to delivery—rather than being left to the very end.

First, Congress, the FDA, and leading vaccine manufacturers must work together to encourage vaccine studies in children and pregnant people. Second, the FDA can revise its guidance to vaccine researchers to streamline development and approval for patients of all ages. Finally, the National Institutes of Health can also work to develop vaccine-research centers and fund scientists dedicated exclusively to children and pregnant people. Trials in these populations require special expertise to recruit volunteers effectively, communicate and manage concerns about potential harms, and collaborate with regulators, given the distinct immune-response profile and stricter safety requirements for studies in these populations.

The larger issue is that lawmakers, regulators, and other public officials frequently have difficulty recognizing when they are causing harm by being overly cautious—and even more difficulty changing policy after they have been made aware of that harm. This problem became apparent in the contentious debates around COVID-19 protections in schools and has resurfaced again as monkeypox patients struggle to gain access to an FDA-approved drug. When public health is at stake, policy makers need to recognize that equitable access to innovation is as important as protection from harm.