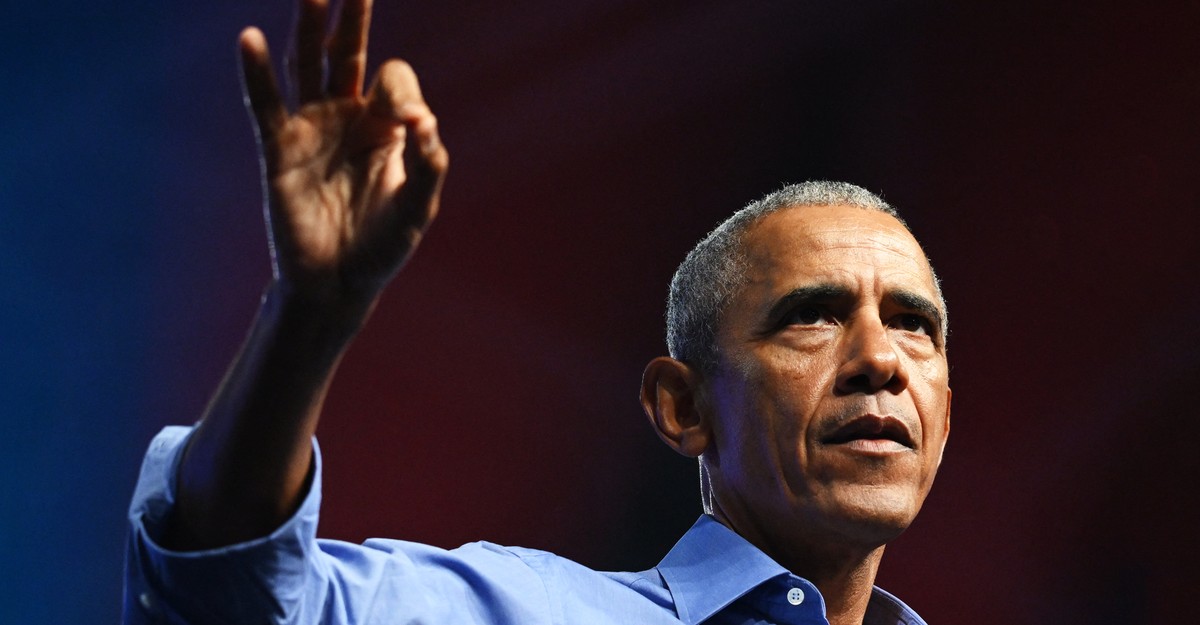 PHILADELPHIA—Outside the basketball arena at Temple University, a long line of anxious Democrats contemplated their party’s possibly bleak political future, as a brass band played Taylor Swift’s “Shake It Off.”

That strange juxtaposition of dread and joy seemed to be the theme of Saturday afternoon’s rally at the Liacouras Center. Democrats were happy to hear a closing campaign message from President Joe Biden, and excited to show their support for Senate candidate John Fetterman, gubernatorial hopeful Josh Shapiro, and the rest of the Democratic slate. They were cautiously hopeful, in their Fetterman gear and Phillies hats. But they also see the present moment as an unusually perilous one—for the future of the party, and for democracy itself. So they were desperate, more than anything, for some last-minute reassurance and inspiration from their one-time party leader.

“Obama has a gift for putting things in perspective, that makes [politics] accessible to just about everybody,” Barbara Pizzutillo, a physical therapist from the Philadelphia suburbs, told me before the rally. “To see the excitement in the crowd is what we need right now.” A Philly native named Kip Williams said he was excited just to be there, near the band. “This line inspires me. I got a real good hope for Tuesday!”

When the 44th president came on stage, the crowd greeted him like a long lost friend—or a favorite teacher who’d returned after a series of varyingly unimpressive substitutes.

“The kind of slash and burn politics that we’re seeing right now, that doesn’t have to be who we are. We can be better,” Barack Obama said, coming on stage after Biden, Shapiro, and Fetterman. “I believe things will be okay,” he assured the audience. “They’ll be okay if we make the effort … not just on Election Day but every day in between.”

Polls have been tightening in recent weeks, especially in Pennsylvania, where the Republican candidate Mehmet Oz is now virtually tied with Fetterman in the race to replace Pat Toomey in the U.S. Senate. In Arizona, Republican Blake Masters is catching up to Democratic Senator Mark Kelly, and in Georgia, apparently no number of abortion-related scandals can keep the anti-abortion Republican Herschel Walker down in his race against the Democrat Raphael Warnock. And nationwide, a majority of Republican candidates on the midterms ballot maintain that Biden didn’t win the election in 2020.

Which is why, three days before Election Day, Democrats have broken out their biggest gun of all. Pennsylvania was the latest stop on a swing-state tour that Obama began only about a week ago in a last-ditch effort to energize voters in Arizona and Wisconsin. Events like these are not meant to persuade undecideds; they’re to reward activists and volunteers, and help turn out the base—the people who will knock on doors and give rides to the polling station on Election Day.

“Like Brad Lidge in 2008,” said Anthony Stevenson, likening the pitcher who helped Stevenson’s hometown Phillies win the World Series to the Democrat who gained the White House that same year. “He’s the closer!”

How effective this rally will be, just 48 hours before Election Day, is hard to know. But the promise of hearing from Obama was enough for voters at Saturday night’s rally. They needed to hear from him, they told me, because they needed to remember what politics used to be like—and, they hoped, could be again.

Biden opened the event, but Obama was the headliner. Right away, the former president was in his element, fluent with the gags and punchlines: “Don’t boo! Vote!” He teased Fetterman for being “just a dude” who wore shorts in the winter. (Fetterman had earlier tweeted how he’d “dressed up (wore pants)” to meet Obama on a previous occasion.) But there were serious moments, too.

Obama dutifully bashed Oz’s “snake oil” peddling and GOP gubernatorial candidate Doug Mastriano’s extremist beliefs. And he reminded the audience that the Democrats had been “shellacked” in the 2010 midterms when he was president, and took a drubbing again in 2014. The same would happen this year, he warned—if they didn’t turn up at the polls.

“I understand that democracy might not seem like a top priority right now, especially when you’re worried about paying the bills,” Obama said, echoing Biden’s choice recently to focus message. But “when true democracy goes away, people get hurt. It has real consequences.”

Voters last night seemed to feel the weight of his words. “It used to be that you were just voting on politics and ideology,” Jody Boches, from nearby Abington Township, told me. “Now the integrity of all these institutions and the right to vote and the wellbeing of our democracy” are under threat. When I asked about what it meant to see Obama, Boches gestured to her cell phone and laughed. “My daughter who’s at grad school at UVA has asked me to record him speaking, just so she can remember what it was like to hear him speak.”

Some at the rally expressed a very qualified optimism. The main priority for everyone I spoke to was abortion—and that the Supreme Court’s overturning of Roe v. Wade could be what boosts Democratic turnout this year. Mary Halanan, from Doylestown, told me that she could envision a strong bloc of such voters emerging on Tuesday—“people like me,” she said. “I’m hoping I’m the silent majority.”

Others were more nervous about what next week will bring. As once-promising Senate races have tightened, the prospects for the president’s party in the House are grim. Republicans need to pick up only five seats to take a majority; they seem poised to do much better than that. Even if the Democrats keep control of the Senate—at best, a tenuous proposition—the rest of Biden’s term in the White House seems certain to involve a barrage of investigations and impeachment attempts, rather than any effort toward bipartisan legislation.

Again and again, the Democrats I spoke to in the crowd told me how much they missed Obama’s thoughtfulness and compassion. Their longing was all the more poignant for what it seemed to say about what they found missing from the Democratic leadership today: They don’t make ’em like that any more.

When the rally was over, Rosalin Franklin and Pam Parseghian stood side by side, waiting to cross the street. “We were just talking about how he brings people together,” Parseghian said, with a sigh. “Here he is talking about his wife, talking about the good.” And she reenacted his words: “Believe in science! Believe in the future!”

After Parseghian and Franklin finished explaining how delighted they’d been by Obama’s appearance, I asked whether they felt any more confident about their party’s electoral outlook than they had before the rally. Both women paused. “Yes,” Parseghian said eventually. Franklin nodded slowly. “Yeah … still worried. But yeah.”