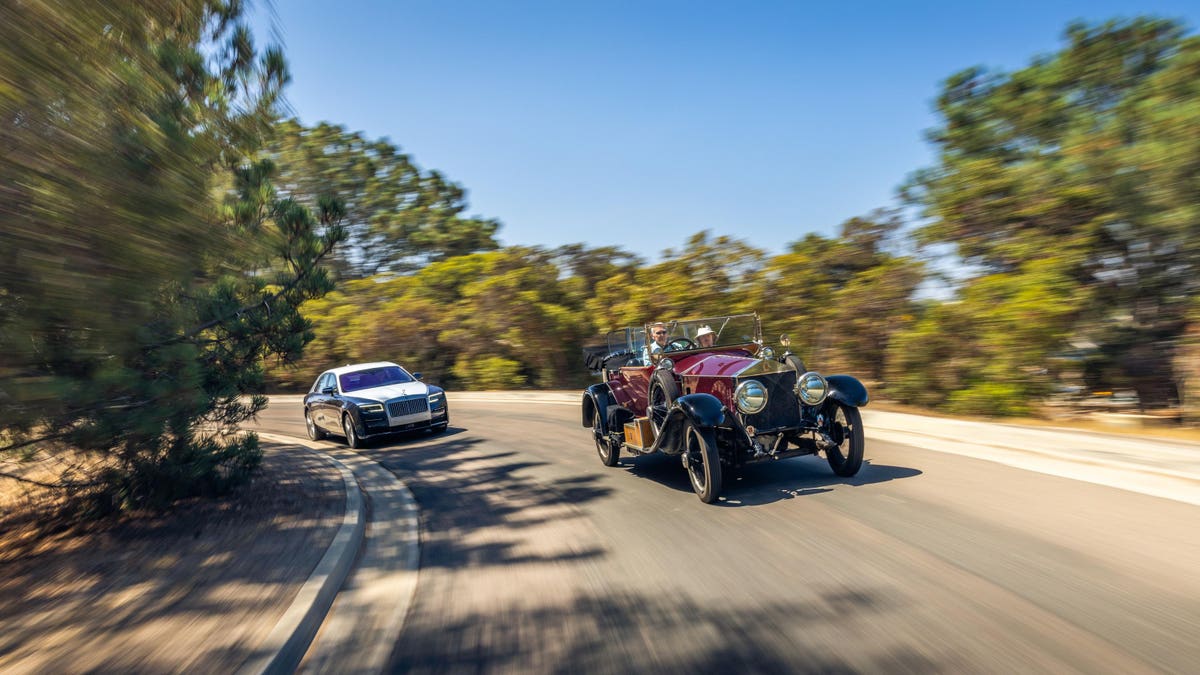 Seasoned citizen that I am, I understand a half-century can disappear in the blink of an eye. The two Rolls-Royce Silver Ghosts I experienced this past week had survived remarkably intact to the century mark, yet both are driven thousands, even tens of thousands of miles each year, crossing continents as readily as running down to the Busy Bee diner for eggs and bacon. These two Henry Royce masterpieces, which I experienced at the Rolls-Royce Owners Club national meet, helped establish the high standard that contemporary Goodwood Rolls-Royces must match.

Doug Gates is a Michigan car industry veteran who retired to California. He first experienced Ghosts decades ago, and patiently waited to buy the second of the two currently in his stable. Gates performs most of the mechanical service himself, pulling on dungarees to lube suspension joints on a weekly basis, keeping the sewing machine straight-six engine in fine fettle, and in pre- and post-COVID times, driving the cars as often as possible.

Anyone who has owned a vintage or classic car knows that when they sit, they grow arthritic. They are happiest when motored on a daily or weekly basis. Such is the bond families forge with such fine cars, Gates still sends photos and updates to the previous owners, whose family owned the car for more than a half century.

Doug and Mary White own the claret red 1923 straight-sided Barker tourer you see here. No Millennial or Gen Z adventure traveler has the drop on this pair. “We’ve taken many extensive journeys in 29LK, including a round trip from North Carolina to Alaska, about 12,000 miles,” says Doug White. Over the past 30 years, the couple has logged more than 100,000 miles. The engine is original but for a century of maintenance and use, and a tall overdrive gear has been added to let the car lope easily on open highway.

of our trips are on tours with the Silver Ghost Association, so-called ‘Wholly Ghost’ tours since only Silver Ghosts are allowed,” says White. “Our most memorable tour was in South Africa. We container-shipped the car to England where it joined a contingent of about 30 Ghosts shipping into Durban. It was a terrific and wonderfully organized tour lasting about three weeks.” A Contingent of Ghosts amongst the lions, elephants, and Zebras.

“Our first overseas tour was in Australia. Eleven cars from the U.S., all on the same container ship, were shipped to Sydney, but due to the shipping company going into receivership, our ship was arrested in the port of Singapore. Our cars never reached Australia and we went on the tour as riders. The containers eventually made it back to the U.S., so 29LK sailed around the globe, without us, and thus earned the name ‘Magellan.’”

“We usually participate in one or two Ghost tours annually, accruing 5-10,000 miles a year. We acquired Magellan in 1982. In 2006, after a crash in Yellowstone—that’s another story—we had the current body made in England and installed on the fully restored chassis. It is a copy of a straight-sided, as opposed to barrel-sided, Barker tourer,” says White. Like most fine cars of a hundred years ago, Magellan originally had enclosed bodywork.

“Once they’ve been restored, Silver Ghosts are durable and highly reliable automobiles and generally require only routine maintenance, especially daily lubrication when on tour. I have no hesitation embarking on a 5,000-mile tour just for the pure enjoyment of being on the road,” says White. White piloted the car around Mission Bay for our photo shoot, and at one point was forced off the narrow pavement by the Cullinan SUV serving as the photographer’s rolling platform, the left-side tires digging into the soft soil. White was entirely unphased and motored on. Clearly, Magellan is a craft built for adventure on the road.

In the Great Teutonic Ego Kerfuffle over ownership of Bentley and Rolls-Royce, finally settled in July of 1998, oddly enough BMW did not receive ownership of Rolls-Royce tooling and engineering drawings. This relieved BMW of providing parts for the Vickers Era Rolls-Royces of the 1980s—that onerous responsibility lands on the VW Group—but it also imposed certain limitations on BMW. I would love to see BMW scan and digitize the many parts of the Ghosts and the succeeding generations of Phantoms to not only produce replacement parts, but also continuation vehicles in strictly limited numbers.

“As far as availability of replacement parts, although periodic shortages occur, at the present time just about anything you could possibly need can be ordered from one of the companies that specialize in Silver Ghost restoration both in the U.S. and in England,” says White.

If BMW is never free to step up to parts supply, the private firms will keep the cars going, conquering the highways of several continents, as they always have. “And yes, of course,” says White, “we have driven up Pikes Peak many times.”