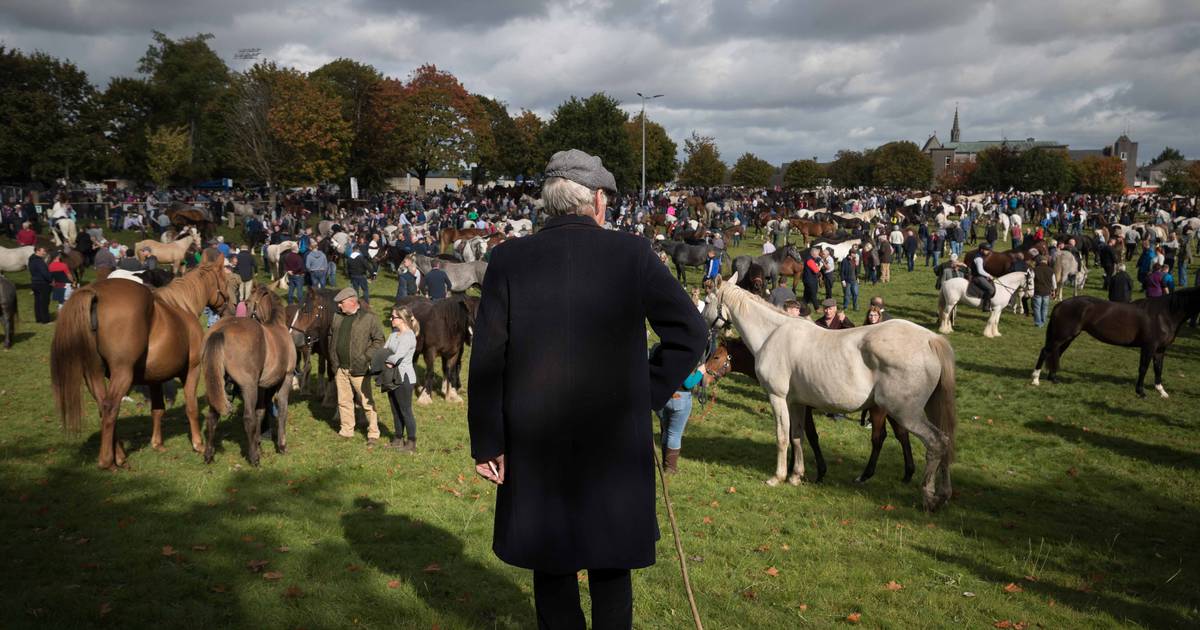 The first person I bumped into at the Ballinasloe Horse Fair was the General, with a white pony he bought in August. He was hoping to turn it around for a small profit. “I’ve been here all morning but no luck yet,” he said, “I may billet myself in a guest house if I don’t find a buyer by this evening.”

There was a time he would have slept in the jeep but those days are gone.

“Did you know that Jonathan Swift once stayed in Ballinasloe?” I asked. “In the Cock and Hen.”

The name instantly aroused his curiosity. “Is that a guest house?” he wondered.

“It was,” I replied, “two hundred years ago. But I expect they’ve gone out of business by now.”

I left him lunging the pony and I walked up past the fun fair and a fortune teller’s trailer.

Two gardaí were sitting on white horses near the middle of town as clusters of young women with long hair and boys with shaved lugs moved between the stalls. The women’s hair fell down below their waistlines as they paraded up the street, and the boys stole furtive glances while pretending to be talking to each other.

I was standing beside a stall of hats and flat caps when a stranger put a hand on my shoulder and said, “that suit is a size too big; if they lay you out in that you’re going to look very poorly in your coffin”.

I could see he was a poet from the eloquence of his imagination. “The suit is fine,” I declared, “but I need a peaky cap.” And as a sort of remembrance of the queen’s recent demise I bought one with “royal stallion” emblazoned on the side.

Babies were sucking soothers in buggies all about us and mammies in fur coats and leather boots to the knee were milling around an antique dealer with trays of golden and silver rings. There were stalls draped with bridles and bits, with saddles and stirrups, but the poet and me were hungry.

“Can I buy you some chips or a fish,” he inquired as we listened to a pair of buskers.

An elderly man on a stretcher collapsed and was lifted into the back of a civil defence ambulance, and then the paramedics closed the door and headed away towards Portiuncula Hospital.

A woman veiled in black from her toes to the top of her head was selling balloons that she had strung to a lamppost. A man from Monaghan told me that the first time he came to the horse fair was in 1981 in his father’s Austin Cambridge, and the poet confessed that when he was newly-wed he reached the fair by hitching a lift and returned home that evening on the back of a horse. His young wife was terrified that she had married an unstable character.

We weren’t just hungry, we were thirsty too, but the pubs were closed so the three of us, like wise men, headed for Bethlehem, a restaurant on Society Street serving pizzas and burgers, chips and kebabs. We secured a table and looked around for a toilet, which was urgently required. A girl with an iPhone Max in the back pocket of her denim miniskirt was struggling to reinstall her eyelashes at the counter, while older women chatted at small tables and men lingered nearer the front door. We sat with strangers because the place was so full.

Two men beside us said they had come on a bus from Castlepollard and a couple from near Clonmacnoise said they came for the week. They were eating such enticing pizzas that we ordered the same, with chips and strong tea.

At one stage the proprietor came over with chocolate cake that nobody had ordered. He said it was on the house, and I asked him why the restaurant was called Bethlehem.

“Bethlehem means a ‘house of bread’ in Hebrew,” he explained. “And I am a Christian so it is a very suitable name.”

Then I saw the General at the door with a forlorn face. “The pony is sold,” he declared, “and I miss her already.”

He ordered his meal at the counter where the proprietor was spinning dough in the air with nimble fingers and the ovens were flying with warm crispy bread.

“We can only be grateful,” the General declared, as he smiled at his pizza and a portion of chips, “that we have found yet again a welcoming shelter in Bethlehem.”