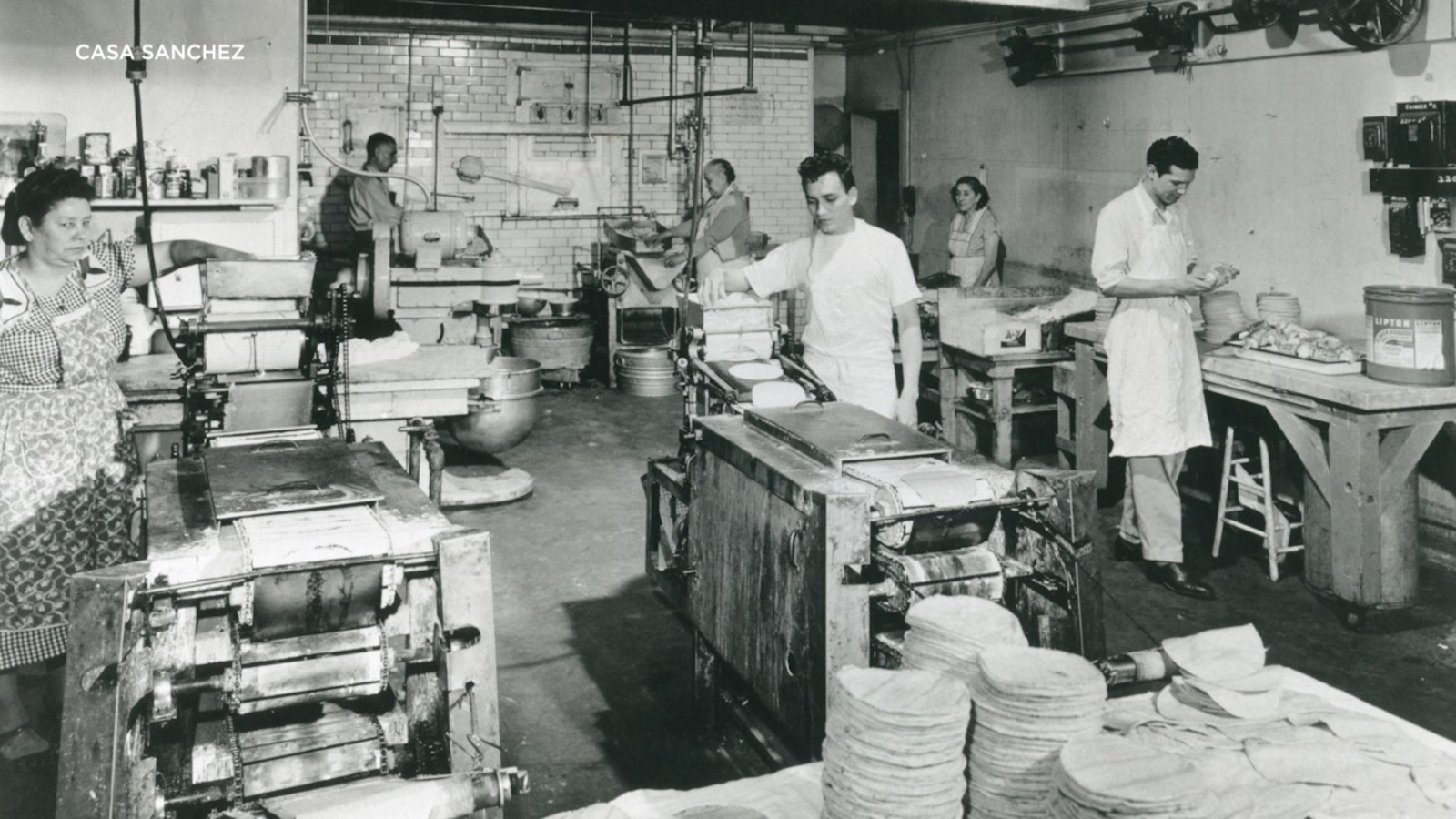 SAN FRANCISCO (KGO) — You probably have eaten tortilla chips and salsas from Casa Sanchez Foods but do you know their story?

In celebration of Hispanic Heritage Month, ABC7 news reporter Luz Pena got an exclusive look inside the factory of Casa Sanchez Foods, where the Bay Area family shared how culture and staying true to their Hispanic roots have kept them going three generations strong.

“He started making tamales, carne con quezos, and he started distributing to the San Francisco Jewish community,” Robert Sanchez said. “At that time, people were not familiar with Mexican food.”

In 1924, Roberto and Isabel Sanchez immigrated to the U.S from Zacatecas, Mexico. They put down roots in San Francisco’s Fillmore district and started selling Mexican food from their kitchen.

The one telling the story today is Robert Sanchez. He’s been documenting every detail of his family history since he was about 5 years old. By then, the family business was expanding with his dad as the lead.

“In a baking facility on Fillmore Street he installed the tortilla factory and started making tortillas,” Robert said. “I remember waking up early in the morning. I’m the oldest, and my brother and I — George — before the sun was even out, we would go into the car. We waited up all night. Literally waited up all night. We would fall asleep in the car and by the time we got to the facility we woke up and there it was.”

During those early mornings, young Robert also had a front row seat to the moment that changed it all: the making of the tortilla chip.

“My dad, It was his idea, because we had tortillas and we had to do something with them. So might as well cut them up into chips,” Robert said.

Luz Pena: “Going back to the 1960’s, mass production and packaging of tortillas didn’t exist here?”

Robert Sanchez: “There were tortillas and there were chips made out of potatoes, Frito Lay, but there were no tortilla chips.”

This is the first time Casa Sanchez has allowed a news crew inside their “casa” facility to see the process.

“The old fashion style. We get the corn. We boil it for three hours until it’s nice and soft. We grind it. Soften it. Form it into tortilla, bake it, store it for dehydration, cut it dry it salt it, and bag it,” said Robert.

Their size is impressive and almost a 100 years since his grandfather sold the first tortilla from home, now their chips and salsas can be found all across the country.

RELATED: Meet the new generation of Latino winemakers in CA trying to make a name for themselves

Luz Pena: “Food is a universal language. Even if people don’t speak Spanish, they’re getting some of the culture with your chips and salsa.”

Robert Sanchez: “That is true. We can find Casa Sanchez chips and salsa in Florida. We can find it in New York, the Mid-West. Different parts of Oregon and Washington.”

Casa Sanchez is not letting their growth change the heart and mission behind their product.

Luz Pena: “You continue to use your dad’s technique all these years later?”

And more advanced too. He is expanding his grandfather’s vision and products’ shelf life.

“We’re making a production of all the salsa. It’s going through a process called HPP. We’re one of the few companies in the United States that puts our products through water cold process to eliminate all bacteria,” Robert said.

In Spanish there’s a saying: “la comida sabe major cuando es hecha con el Corazon.” This translates to: “food tastes better if made with the heart.”

A sense of familia and heart is also key for their recipe to work.

From the kitchen to the deliveries. We saw it, Robert went out of his way to greet every worker.

RELATED: A love of car racing brings this family together

Many view their roles as a way to share their Latino culture with the rest of America. They take that mission seriously.

“Me enorgullese estar haciendo esto. (You are proud to be doing this) y que muchas personas lo disfrutan. (And to know that many people enjoy it.) Algo que es de nuestra cultura. (Something that is part of our culture),” said Rosa Gonzales a Casa Sanchez employee.

Maria Leon’s job is a bit more taxing than others, but without her, the salsas wouldn’t taste the same.

“You do cry. Tears are coming out. (Si lloras de verdad? Si lloras e verdad? Por una hora?) For an hour every morning,” said Leon as she chopped a table full of onions.

We met Osvaldo Ambriz as he loaded his truck. As a Latino, this job is also about the next generation.

“You know my kids are proud of me for doing this. I do it for them. Once we go to Safeway and they see the chips they say ‘oh that’s daddy’s chips’ ‘that’s our daddy’s job’ and they are very proud of that,” said Ambriz.

Even though Robert’s dad is no longer alive, he carries him close to his heart every day, wearing a shirt with the Casa Sanchez logo of a man riding a corn on the cob.

And who knows? They might. For now, here on Earth, they have captured the hearts of millions across the country. From a small San Francisco home kitchen to an impressive facility.

Luz Pena: “What do you think your grandfather and dad would say today?”

Robert Sanchez: “Luz, I think they would be proud of where they started. Where the path of Casa Sanchez is going today. They know there are many generations behind it and many more to come.”