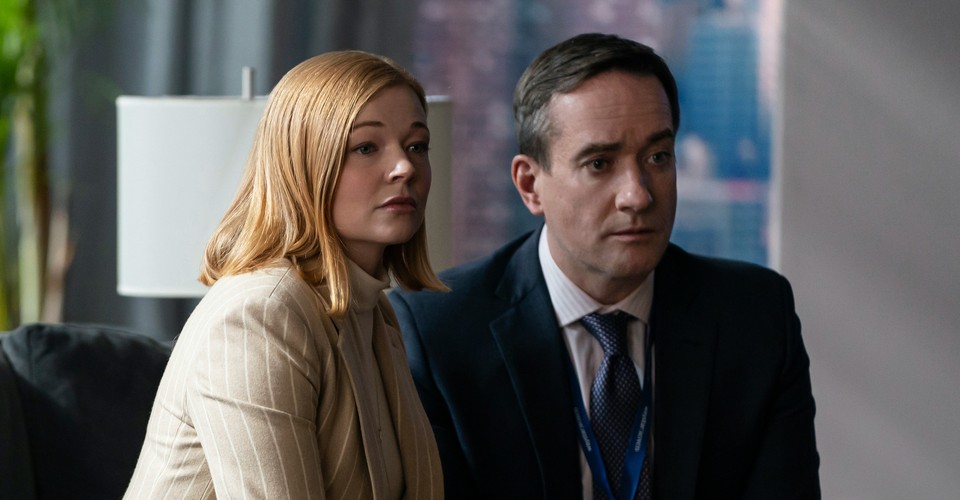 This article contains spoilers through the sixth episode of Succession Season 3.

The marriage between Shiv Roy and Tom Wambsgans is, at this point, built on mutual ambition and cold white wine, and the wine at least has turned poisonously sour. On tonight’s episode of Succession, “What It Takes,” as the Roys travel to Virginia to anoint a new Republican presidential candidate at a power brokers’ conference, Tom (played by Matthew Macfadyen) opens a bottle from his and Shiv’s vineyard and embarks on an emotional journey. “So it’s biodynamic,” he says to Shiv (Sarah Snook), who appears not to be listening as she absorbs an ATN broadcast on her iPad. “It has quite a funk to it. You kind of have to meet it halfway, right? … There’s lots to unpack. It’s not floral. It’s not sugary, or vegetal. It’s quite agricultural, you know, it’s, it’s, uh …” Finally, Tom gives up. “It’s not very nice, the wine, is it, Shiv?”

As metaphors go, discovering that the fruit of your marital harvest is less Chassagne-Montrachet than eau de dung pile is a pithy one. For Tom, slowly being pulped this season by the weight of an impending prison sentence that he hopes will win his father-in-law’s favor, it’s just one more indignity to add to the list. With Kendall (Jeremy Strong) high on his self-aggrandizing whistleblower tour and Roman (Kieran Culkin) getting nastier the closer he gets to his father’s favor, my sympathies this season have mostly lain with Tom. In private, he seems haunted, less by even the specter of prison than by the dawning realization that he might have made a bad bet in the game of life. When it comes to Shiv, he veers from weak attempts at control—trying to get her pregnant to ensure her fidelity while he’s incarcerated—to melodrama. (“Mondale’s not well. Mondale’s unsettled,” he tells Shiv after the so-named dog eats her pantyhose, his voice trembling with a kind of Joan Crawford–in–Baby Jane creepiness.) The question for the season is, will Tom actually break? Or is the privilege of being even a third-tier Roy so profound that he’d rather be miserable than renounce it?

Read: The best show on TV is stuck

The point of Succession, the show’s creators and cast have long explained, is to explore how extreme wealth and, by association, power corrupt a family from the inside out. The idea of contamination is usually subtextual, though sometimes overt. Most of the characters on the show, with the notable exception of the Roy patriarch, Logan (Brian Cox), appear to have redeeming qualities somewhere deep down, particularly with regard to caring for one another—Roman rescues Kendall from a meth binge; Kendall roars at Logan for hitting his brother; Shiv pleads with her father not to sacrifice Tom at the end of Season 2, even though it costs her his respect and Tom eventually sacrifices himself anyway. More often, though, they conspire against and even actively damage one another under Logan’s influence. Shiv and Tom’s partnership has the dubious honor of being the only consistent, long-term romantic relationship depicted on Succession, which would seem to separate it at least slightly from the familial wrangling over the company. But their marriage is also inextricable from the family business, which leaves it unable to exist on its own terms. “It’s good to know we don’t have an unbalanced love portfolio,” Tom tells Shiv earlier this season, a cringeworthy statement that’s also gloomily inaccurate.

What this means on the show is that Tom, the child of a lawyer who grew up in St. Paul, Minnesota, owes everything he has to his marriage, and that Shiv, who for a long time had no clearly defined role or real power inside the Roy empire, wields authority over her husband any chance she gets. Almost three full seasons in, I still can’t decide whether Shiv is fascinatingly sphinxlike or maddeningly underwritten, or both. She often seems to exist less as a character in her own right than as a foil for the men around her. Her initial retreat from the family business and her career in politics feel like an acknowledgment that she’s neither toxic enough nor absurd enough to succeed within the Roys’ company, Waystar Royco. And yet she treats her marriage to Tom—a Waystar executive who’s as buffoonish and grasping as her brothers—as a way to passively gain power without making herself vulnerable. “I’m happy to be Tom Roy,” Tom tells her in Season 1, before their marriage, an admission that her status as a Roy scion supersedes any identity or dreams he might have on his own.

Read: The gerontocracy is the villain of Succession

Shiv and Tom’s relationship is so intriguing that real-life marriage counselors and Vanderbilts alike have commented on everything that’s wrong with it. (“There is a concerning lack of communication and openness, not to mention empathy, between these two,” one psychologist concluded.) They have no palpable chemistry. When Tom made sexual overtures to Shiv in last week’s episode, “Retired Janitors of Idaho,” she recoiled, even before he revealed that he’d been secretly tracking her menstrual cycle. Virtually every interaction between them is governed by the exercising or the amalgamation of clout. Shiv has repeatedly tested hers by demanding things Tom isn’t comfortable with: an open relationship, a threesome, even that he visit Logan’s tailor for his suits. Tom, for his part, capitulates over and over, knowing full well that standing up to Shiv on behalf of his own desires means losing her, and losing everything that comes with being a Roy.

And yet, Tom’s association with the Roys is also breaking his spirit. Season 3 has inflicted one wound after another on him, each a reminder of how little he means to anyone. “I haven’t really slept properly in about eight days,” he confesses in tonight’s episode. Shiv says that she’s bored with his obsessive chatter about prison. On the family jet to Virginia, they sit at opposite ends of the plane. In the fleet of cars the Roys use, she chooses to ride with her father. When the Waystar communications boss, Hugo (Fisher Stevens), updates the family on murmurs from the Department of Justice regarding its investigations into the company, he tells them that “no one big is likely to do jail time … with the notable exception of Tom, obviously. Sorry, Tom.” In my review of HBO’s The White Lotus earlier this year, I wrote that that show has a distinct thesis about privilege: People who have it would rather be miserable than sacrifice even a fraction of their status. Tom is caught in the same trap. If his marriage survives, it will be because he has decided that the money is worth the pain.