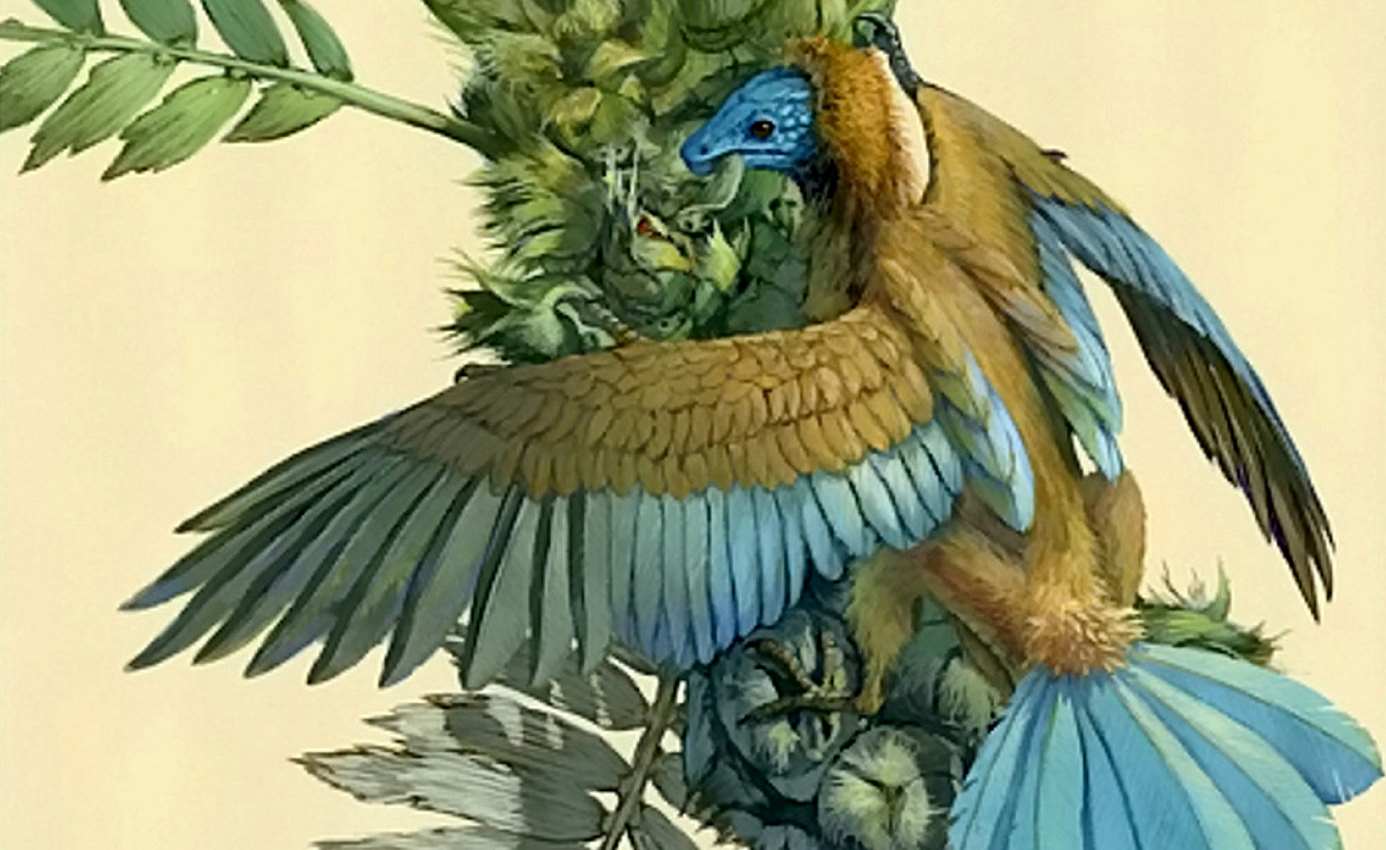 A bizarre cross between a bird and a dinosaur had blue, brown and grey feathers, a long tail, and small teeth.

What’s more, their brain morphology is perfectly transitional between bird and reptile, with a brain likely built to smell like reptiles, but also to see well in daylight like birds.

Jeholornis lived 120 million years ago, and recently scientists have digitally-reconstructed its skull for the first time at the Field Museum in Chicago.

“If you look at the skulls of dinosaurs, what you see is a spot for a very reptile-like brain,” said co-author Professor Matteo Fabbri at the museum, “meaning they have very large olfactory bulbs, and the optic lobes in the midbrain are reduced.”

“They probably had a very good sense of smell and not great sight, which is very reptilian. And on the other hand, if you look at modern birds, they do the reverse. They have small olfactory bulbs, and very large optic lobes. Jeholornis falls in the middle.”

Raven-sized Jeholornis is the earliest known animal to eat fruit. The international team selected the best specimen unearthed from prehistoric graveyards in China.

It was finely preserved and intact but a little flattened by layers of sediment deposited across the ages.

“It is very difficult to find the right skull among around 100 fossils, since we won’t know if one skull will provide us the information we want before the scanning,” said co-author Han Hu, from Oxford University, who added high-quality screening costs were also quite high.

“However, I chose one [that] at least from the exposed surface, it is relatively complete. What is also important is this skull is isolated from other parts of its body. [An] isolated skull will reduce the size of the scanning area, which will increase the scanning quality a lot.

“Luckily, the specimen we chose here for this project is nearly a perfect one – it provided us so much unknown information after the digital reconstruction.”

The study, published in the Zoological Journal of the Linnean Society provides the first accurate depiction of Jeholornis—showing it was among the earliest examples of dinosaurs evolving into birds.

“Jeholornis is my favorite Cretaceous bird,” said co-author Prof Jingmai O’Connor candidly, also from the Field Museum. “This study is the first time we are really getting at what this bird’s skull looked like, what its brain must have been like, which is really exciting.”

Knowing the shape and dimensions of a fossil bird’s skull tells us a lot about its brain—like how a glove gives a decent approximation of a hand.

What’s more, brain structures are conserved across species over time. Olfactory bulbs and the cerebellum are in the same general spots in a frog, a human or a fossil bird.

Jeholornis had bigger olfactory bulbs than most modern birds with a few exceptions such as vultures, meaning it probably relied more on smell.

“As fruits ripen, they release lots of chemicals. Having a better sense of smell might have helped Jeholornis find fruit,” said Professor O’Connor.

Birds have bones called scleral rings that help determine how much light goes into their eyes. In this area also, Jeholornis is an in-betweener.

Nocturnal species like owls have wider openings relative to their eye sockets. Birds active during the day have narrower ones, like Jeholornis.

Dr. Fabbri said the story of Jeholornis is “not just different from dinosaurs and modern birds, it is different from other early birds too. It is not a straightforward evolutionary story.”

“Its special position as one of the most primitive birds during the dinosaur-bird transition determines completing its story will reveal the true scenery of that critical evolutionary period, and also, tell us why and how the modern birds—the only living dinosaurs—evolved to be what we see now.”

SHARE This Fascinating Research On Your Social Media Platforms…