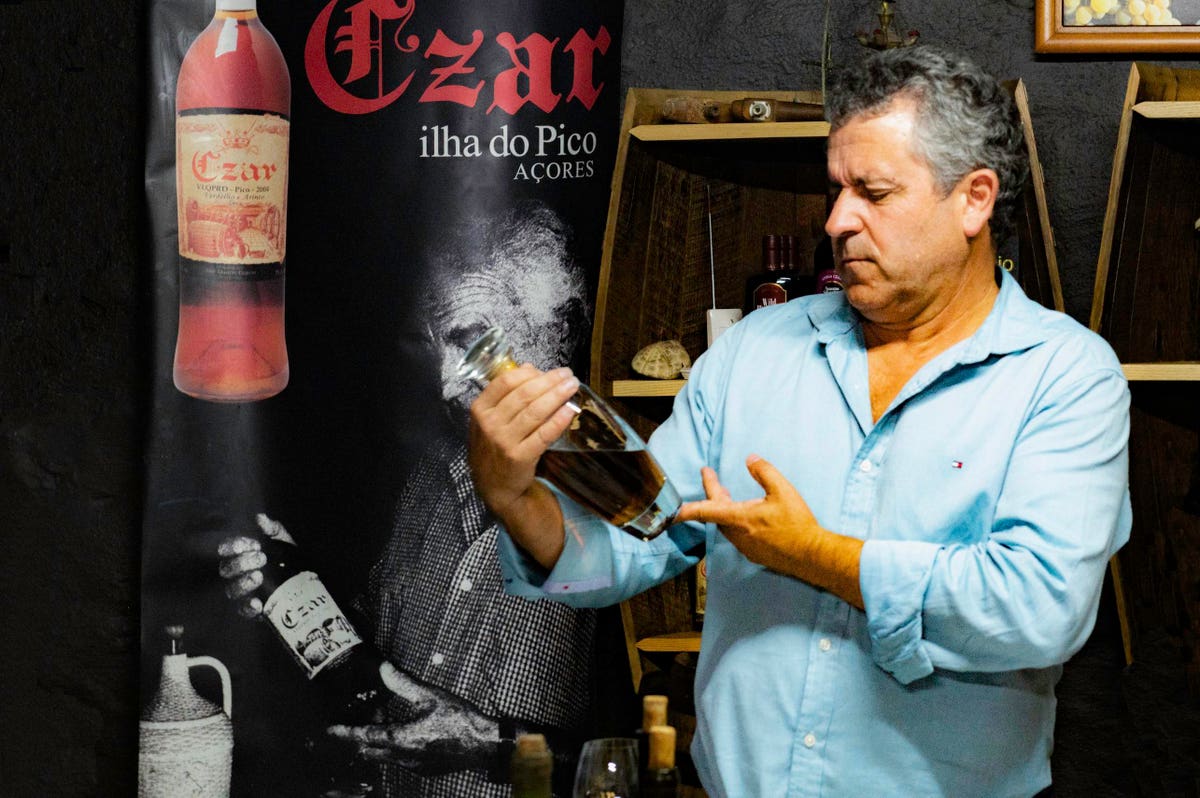 When Fortunato Garcia talks about his wine, Czar, he keeps coming back to one word: madness.

Nothing about his project—which his father began on the island of Pico in Portugal’s Azores archipelago in the 1960s—makes much sense. The grapes are grown on a tiny volcanic island with a violent climate in the middle of the Atlantic. The wind and the salt don’t let up. The vines are old, and their yields are tiny. They aren’t trellised but lie on the ground instead. The vineyard is a giant maze of black lava-stone walls, built to keep the plants warm. The harvest (done by hand, naturally) is a major undertaking.

This wine is aged for a very long time in old barrels, and the angels’ share is unusually high. And then some years—maybe half of them—the grapes just aren’t up to snuff, and then there’s no vintage at all. And yet he keeps doing it. Madness.

By most ways of looking at it, it’s a project that shouldn’t work. But as the old wine cliché goes, the harder the grapes have to fight for their survival, the better the wine tastes. And the more Garcia persists with his crazy project, the better his product.

The name would seem to say something about the aspirations of his target clientele, but in fact it’s a nod to Pico’s history. The vineyards of Criação Velha (where Garcia grows his grapes) were first planted in 1690. In 1797, Pico’s late harvest wine was served at a banquet for the Prince and Grand Master of the Sovereign Military Order of Malta. In 1820, 23,250 liters of Pico’s late harvest were sent to Saint Petersburg, home to the richest court in the world, and nearly a century (and a couple of devastating wine plagues) later, “great quantities” of the stuff were found in the palace cellars of Nicolau II, the last of the czars.

Now Pico wines are making a big-time comeback. But Garcia’s Czar is something sublimely different. It’s also unclassifiable. Perhaps madness—loucura—is as good a word as any.

The other word that keeps coming up is licoroso, one of those famously untranslatable Portuguese words. Maybe it could be liquor-ish? The wine is not fortified but it has a naturally high alcohol content (around 18%), giving it depth and complexity, something fascinating.

When I ask Garcia how he explains it in English, he throws up his hands. “Some people call it a dessert wine,” he says, but he disagrees because it’s not all that sweet and can be enjoyed as an aperitif or with a meal. “Sweet wine” is incorrect for the same reason. “Late harvest” is closer, as the grapes are harvested late, in October when they’re shriveled and sweet, but as a wine term it means something specific and different. “Raisin wine” sounds more appetizing in Portuguese.

This is where I admit I’m not a wine critic. But I was fortunate enough to be able to tag along with a few professionals to sample the new release, the 2013 reserve. Only 863 bottles were produced, and each one (minus the one we opened) sells for 490€. It’s a price that reflects the hard work, low yields and crazy risk. Also, every vintage is completely different from the last—it tastes like its time and its place, as well as the dreams of three generations of crazy dreamers. Part of the price is the surprise.

One of those professionals described the new release as a complex and elegant wine with notes of cedar, molasses and marine scents. In the mouth, he wrote, it’s a ping-pong between caramelized oranges, molasses and raisins, in a register of great finesse. I don’t disagree.

I may not be a wine critic, but I do know hospitality. And so does Garcia. Which is why (as is so often the case), as good as the wine tastes in the glass or looks in the bottle, it doesn’t compare with going to source and sipping it with the winemaker himself.

Visiting the Czar winery is not a particularly opulent affair. From the outside, it looks like a rather ordinary house, surrounded by vineyards with the ocean just down the hill. Inside, it’s…cluttered. A long table sits in the middle. Barrels line two of the walls, with framed awards and newspaper articles (many of which feature Garcia’s father) propped up in front of them. The professionals in my group pointed out their bylines. It’s a bit tricky to circulate without knocking something over. Another wall has bookshelves filled with archival bottles, going back to the days (even the 1990s) when they recycled a hodgepodge of leftover wine bottles from local restaurants instead of buying their own.

Garcia is relaxed as he hosts his visitors, telling them about the history of Pico wines and the tribulations of his grapes. He’s also a schoolteacher, so you can’t just roll up. But if you make an appointment, he’ll make it worth your while.

The most accessible is the simple tasting: a glass of the 2011 vintage plus some snacks, as well as his time and his stories. But it’s silly to go all that way and do only that. Another option is to buy a bottle of the 2013 vintage (for up to ten people), which will be served with Azores cheese that’s been aged more than five years, which has an intriguing complexity all its own.

Best of all is letting him cook you lunch. Garcia makes a mean caldeirada (Portuguese fish stew), with generous lashings of Czar in the broth, plus a bottle of Czar for the group, as well as some rare table wines. It’s an experience to remember. How you describe it when you get home is up to you.