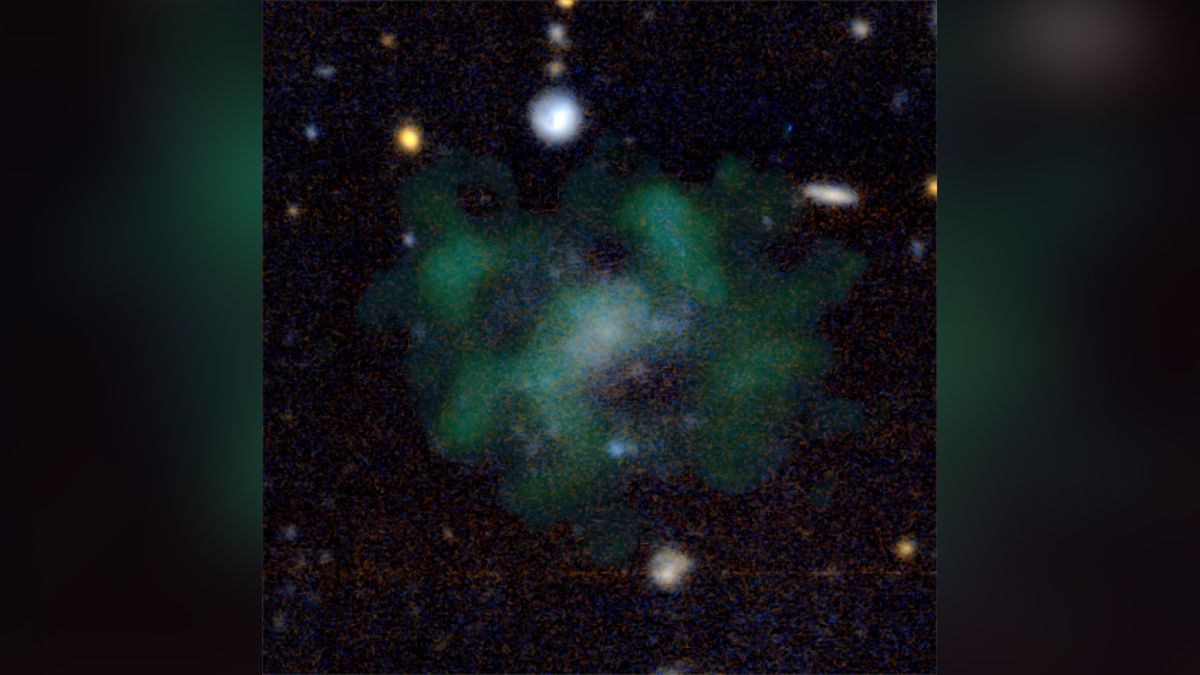 On the surface, a galaxy 250 million light-years from Earth seems like any other, but a deeper look reveals a puzzling quirk: It seems to have no dark matter.

If these galaxies are ultimately confirmed to be devoid of dark matter, it could upend fundamental theories about the making of galaxies (dark matter is considered essential to this process). And that, in turn, could rule out a leading candidate for the mysterious substance, called cold dark matter.

“In principle, galaxies like this shouldn’t exist,” said Pavel Mancera Piña, a doctoral candidate in astronomy at the University of Groningen in the Netherlands and an astronomer at ASTRON (the Netherlands Institute for Radio Astronomy), referring to the fact that dark matter is thought to be the glue that holds a galaxy’s stars, gas and dust together. “We cannot effectively explain them with any existing theory,” said Mancera Piña, who is the lead author of a new paper describing the findings.

When Mancera Piña and his colleagues first looked at AGC 114905 in 2019 , they suspected it might not have dark matter because of how fast it was rotating. The speed at which a galaxy rotates reveals how much stuff it contains; the more massive a galaxy, the stronger its gravity and the faster it spins. By comparing the speed with how much stuff can be seen — the amount of stars, gas and dust — astronomers can work backward to figure out how much extra invisible stuff — dark matter — must be present to account for the speed of the galaxy.

But because the galaxy in question is so faint, they didn’t have enough data initially to fully resolve the rotation speed to tell if it was totally devoid of dark matter. So they went back for a second look, compiling 40 hours of observations with the Very Large Array, a radio observatory in New Mexico.

Through their observations, which mapped the gas in the galaxy, the astronomers figured out how fast the gas was moving. This allowed them to figure out the galaxy’s rotation speed and thus how much dark matter is present in the galaxy. But ultimately the researchers concluded that there doesn’t seem to be any room for dark matter.

“That’s what we were expecting, of course, but you never know,” Mancera Piña said. “It was still a bit of a surprise.”

In the past, astronomers have discovered some UDGs that are rich in dark matter and others lacking it, Live Science previously reported. Some of the latter type are found near more massive galaxies; this finding suggests they may have lost their dark matter through interactions with their larger nearby galaxies, whose gravity may have whisked the smaller galaxies’ dark matter away. But considering AGC 114905 doesn’t have any massive galaxies nearby, that explanation is unlikely, Mancera Piña said.

This poses a challenge to theories of galaxy formation, because dark matter is thought to be essential for their formation, as its gravity helps pull the relatively rarer normal material together. If there are galaxies with no dark matter, that implies dark matter may not be needed to form galaxies.

“We have been trying to understand what dark matter is for the last 50 years, but we seem to have reached some kind of dead end,” Mancera Piña said. By carefully studying this galaxy and others like it, the astronomers might be able to provide constraints on what dark matter might be like, if it’s not cold dark matter. In the study, the researchers also applied models of an alternative theory to dark matter called Modified Newtonian dynamics, or MOND, to see if that could explain the galaxy’s unique characteristics. However, this theory wasn’t able to reconcile the speed of the galaxy either.

Pieter van Dokkum, an astronomer atYale University who has studied dark matter-deficient UDGs but was not involved with the new work, said he thinks the new findings are promising and significant, but that more research will be required for astronomers to be sure the galaxy is truly devoid of dark matter.

“There will be a lot of discussion,” van Dokkum said. “Extraordinary claims require extraordinary evidence.”

The study authors plan to study AGC 114905 further and are gathering observations of other UDGs that might be free of dark matter.

The findings were published on Nov. 30 to the preprint server arXiv and have been accepted for publication in the journal Monthly Notices of the Royal Astronomical Society.