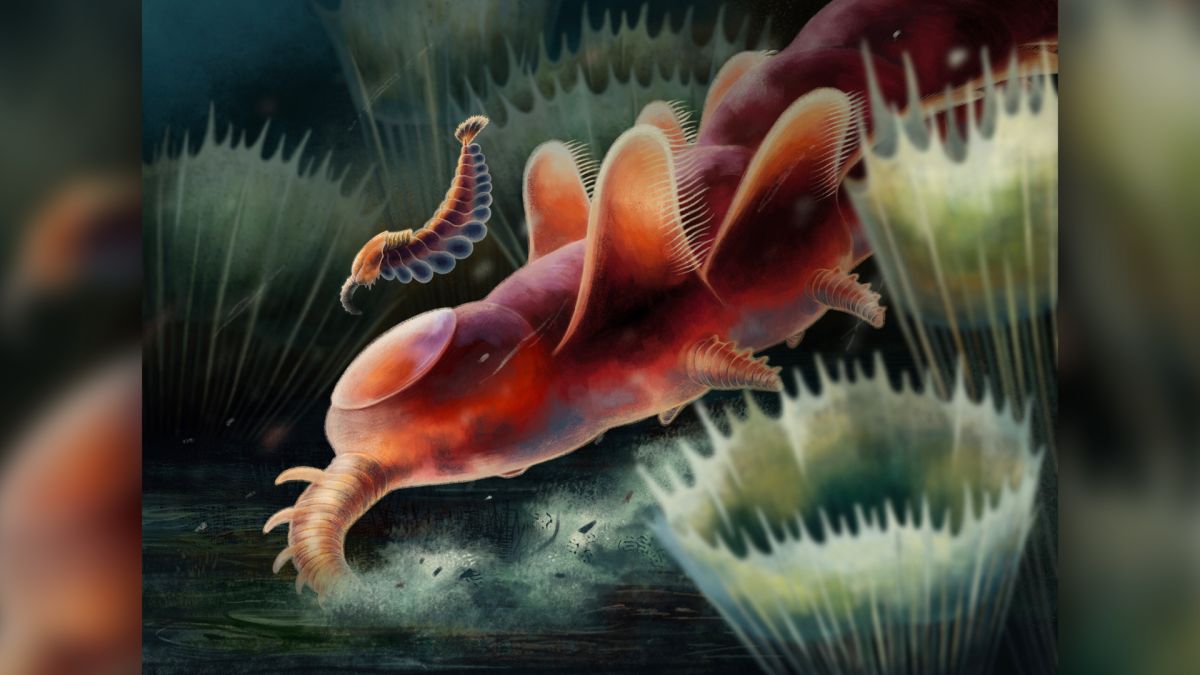 About 460 million years ago, bizarre soft-bodied creatures puttered through the depths of an ocean that covered what is now Wales. They propelled themselves with undulating, rounded flaps that waved over pairs of stumpy legs and probed the water with spike-studded snouts.

Scientists recently discovered two fossilized specimens of these ancient and peculiar organisms, describing one of them as a new species. The fossils, which were excavated from a Welsh quarry on private land, provide an unusually well-preserved glimpse of these wee weirdos and offer clues about the vanished world that they inhabited during the Ordovician period (485.4 million to 443.8 million years ago).

In some ways, the newfound fossils resemble an animal group known as opabiniids, a genus that emerged more than half a billion years ago during a period known as the Cambrian explosion, a period during which an unparalleled diversity of life exploded over 20 million years (a relatively brief span of geologic time). Right now, scientists aren’t sure whether the newly described species are opabiniids or unrelated lookalikes.

Science writer and evolutionary biologist Stephen Jay Gould (opens in new tab) called opabiniids “weird wonders” in his book “Wonderful Life: The Burgess Shale and the Nature of History (opens in new tab),” (W. W. Norton & Company, 1989) and the newly described species certainly fits that description — even though it’s about 40 million years younger than the opabiniids.

Related: The ‘weirdest wonder’ of evolution had an even weirder cousin, new study finds

Like its predecessors, the newcomer, dubbed Mieridduryn bonniae, has a long trunk. The genus name comes from the Welsh words for “bramble” and “snout,” referencing the thorny spines that lined its hoselike nose, while the species name comes from “Bonnie,” the niece of the quarry owners.

A colorful and endearing reconstruction by illustrator Franz Anthony (opens in new tab) brought M. bonniae to life; Anthony imagined the creature as a stubby-snooted “tiny alien shrimp-worm” zipping through the Ordovician ocean, he told Live Science in a message on Twitter.

M. bonniae measured just 0.5 inches (13 millimeters) long, and preserved traces of its gut hint that its mouth opening faced backwards, researchers reported Nov. 15 in the journal Nature Communications (opens in new tab). It had no eyes and underneath its body flaps were squishy, triangular legs that had ringlike segments — another feature that has been linked to opabiniids.

The smaller specimen is 0.1 inches (3 mm) long and likewise has a proboscis, but unlike M. bonniae it also has a fanlike tail. However, such tails are also found in opabiniids, and furrows that appear along this individual’s back are similar to those in other opabiniid species, said senior study author Joanna Wolfe (opens in new tab), a research associate in the Department of Organismic and Evolutionary Biology at Harvard University. The smaller specimen could be a larval stage of M. bonniae or a different species altogether, so the scientists have not yet formally named it, Wolfe told Live Science.

The new specimens are the first opabiniid-like animals to be found in Europe, the researchers reported in the study. But while the two fossils are somewhat like opabiniids, there are some key differences. Opabiniids typically have five eyes, while M. bonniae is eyeless. And opabiniid trunks are smooth, lacking M. bonniae’s spikes. The body flaps on M. bonniae resemble those in another Cambrian animal group, known as radiodonts, but radiodonts don’t have legs or long snouts, Wolfe explained.

“It could be an opabiniid,” Wolfe said. On the other hand, “maybe it’s neither an opabiniid nor a radiodont — it’s kind of in between.”

Opabiniids and radiodonts are distant relatives of modern arthropods — animals with exoskeletons, segmented bodies and jointed limbs, such as crustaceans, insects and arachnids. Whether M. bonniae belongs to one of those two extinct groups or one that’s still unknown, its discovery brings scientists a step closer to understanding how Earth’s earliest squishy, legless animals evolved into arthropods with jointed legs and bodies.

“What these fossils can tell us from an evolutionary perspective is the order of events that happened to get from worm to fully-legged arthropods,” Wolfe said.