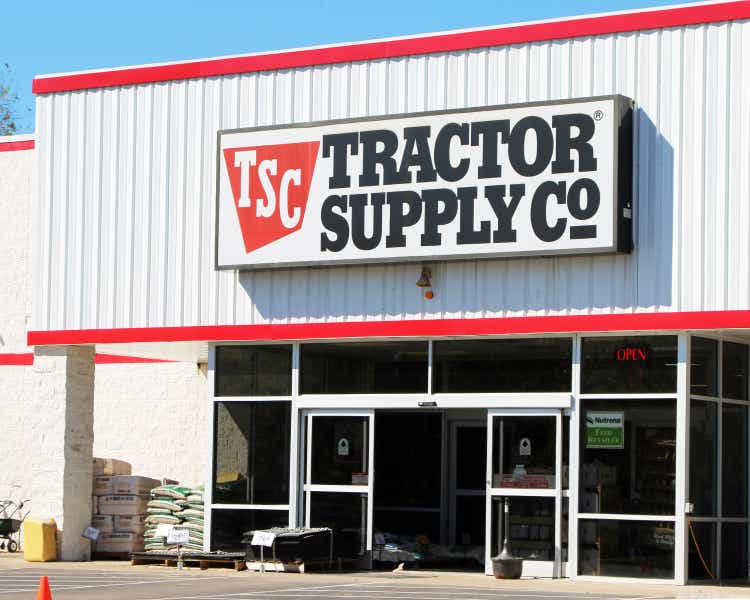 It’s time to talk about the Tractor Supply Company (NASDAQ:TSCO). It’s a dividend growth stock I have discussed in the past as I liked the value the company brings to the table for income and growth-oriented investors. In this case, I want to highlight a potential opportunity caused by economic weakness. Right now, we’re in a very tricky economic environment because of high inflation, falling consumer sentiment, and a Federal Reserve that has to tighten into economic weakness. Hence, I believe it is crucial to monitor stocks that might suffer (a bit), which creates new buying opportunities for long-term investors. Right now, I am convinced that people need to watch TSCO for an entry. Here’s why:

Before we dive into TSCO, let’s start by assessing the environment for consumer stocks in general as that triggered my search for great stocks in the industry.

For the first time in a long time, we see that consumer discretionary stocks are underperforming. The market is pressuring technology and “growth” stocks and oil is hitting it out of the park.

It’s a very different and much more tricky investment environment compared to pretty much any year since the Great Financial Crisis. Inflation expectations are high, supply chains are still in very bad shape, and the pandemic is still causing economic uncertainty.

As a result, we’re witnessing a steep decline in consumer sentiment. In this case, the University of Michigan consumer sentiment index is dropping hard, reaching multi-year lows not seen since 2011. In 2020 sentiment was down because stores were closed and nobody knew what kind of virus we were dealing with. Now, sentiment is down because inflation is doing a number on people through steep price increases in gas, groceries, rents, you name it.

As a result, the yield curve (in this case the difference between the 10-year US government bond yield and the 2-year yield) is flattening quickly. The 2-year bond yield is rising much quicker than the 10-year as investors believe that the Federal Reserve will need to act quicker than expected (hike rates). This will drain dollars from the system eventually and increase overall borrowing costs.

Yet, Tractor Supply remains strong, which is mainly caused by strong housing sentiment. Most know – and I will elaborate on it in this article – that TSCO is not a housing play. Yet, like its competitor Home Depot (NYSE:HD) is correlated to housing strength because a strong housing market indicates the need for projects in and around the house, which is driving DIY companies.

Given that building permits already started to slow, I believe that we could see more weakness in the mid-term due to higher rates and high inflation. Normally, strong sentiment followed by weakness is bearish for TSCO and HD as the graph below shows.

Yet, as there’s far from enough supply in the housing industry, I have little doubt that these numbers will rebound rather sooner than later.

With that said, here’s why I believe that any weakness in TSCO’s stock price is a buying opportunity for long-term dividend (growth) investors.

I currently have 3.8% consumer cyclical exposure. That’s 100% Home Depot. Now I want a second stock in the industry.

When I buy stocks, I care a lot about high entry barriers for competitors or a company’s ability to compete in a crowded industry. That’s why I own only one consumer stock so far – simply because the consumer sector is very competitive.

The Tractor Supply Company is different. Like Home Depot, it is focused on DIY projects and home improvement. Yet, it is a niche company focused on rural America:

We have identified a specialized market niche: supplying the lifestyle needs of recreational farmers, ranchers, and all those who enjoy living the rural lifestyle, as well as tradesmen and small businesses. By focusing our product assortment on these core customers, we believe we are differentiated from general merchandise, home center, and other specialty retailers. We cater to the rural lifestyle and often serve a market by being a trip consolidator for many basic maintenance needs for farm, ranch, and rural customers through convenient shopping options both in-store and online. Source: 2020 10-K

Whether it is the company’s website, its social media accounts, or investor relations presentations, it’s all filled with pictures of cute goats, cows, or outdoor projects – among a lot of other things. The company makes roughly half of its money in livestock and pet care. The company has similar exposure in hardware, tools, truck, seasonal products, gifts, and toy products. The remainder of sales comes from clothing and related.

And they are not just generating sales, they are doing it with increasing margins and strong free cash flow (free cash flow is included in the graph above).

Next year, free cash flow is expected to come close to $870 million, which is 3.5% of the company’s $24.7 billion market cap. Free cash flow is more or less net income adjusted for non-cash items and capital expenditures. It’s cash the company can spend on dividends, buybacks, and debt reduction (among other things).

Since 2012, the company has raised dividends, on average, by 20% per year and spent excess cash on buybacks (see the graph below). On top of that, the company has a healthy balance sheet with current net debt valued at $3.0 billion at just 1.76x this year’s expected EBITDA of $1.7 billion.

Because the implied free cash flow yield is well above its current dividend yield of 1.77%, there is a lot of room to accelerate dividends, which is what the company has done on January 27 of this year when it hiked by 77%(!). That’s why the yield is now 1.77%.

Moreover, according to the company’s 4Q21 earnings presentation, it believes that its addressable market has grown from $110 billion in 2019 to $180 billion in 2021 with room for further growth.

Between now and 2026, TSCO aims to grow sales by 6-7% per year. Comparable sales growth is expected to be between 4-5%, which means that ignoring new stores, its existing stores can do up to 5% in annual sales growth. That’s a big number and it shows confidence in its model. It’s not just building new stores to hide poor organic sales. This is growth across the board. Meanwhile, the company aims to maintain operating margins between 10.1% and 10.6%, which is good news given the inflationary environment. And it does support between 8-11% in annual EPS growth.

Not only is the company growing through new customers, but it is also retaining existing customers through its Neighbor’s Club, which has 97% customer retention and 3x higher spending – it has 23.6 million members(!).

Additionally, management is ramping up spending on marketing across multiple channels including Fox News, CNN, the History Channel, ESPN, Facebook, and the NFL Network.

It also helps that the company scores above-average (source) on team member friendliness, speed, and ease of checkout, as well as member knowledge.

The company’s growth strategy also includes omnichannel growth. TSCO has 38 quarters of double-digit e-commerce growth. 80% of it is buy-online-pick-up-in-store sales (“BOPIS”). 10% of e-commerce sales are mobile sales. Currently, 7% of all sales are digital. The company wants to push this to more than 15%.

So, as a result, the stock has outperformed its consumer peers and the market on a long-term basis as the graph below shows.

The only problem is that the stock isn’t “cheap”.

Using the market cap of $24.7 billion and $3.0 billion in net debt, we get an enterprise value of $27.7 billion. That’s 14.6x next year’s $1.9 billion expected EBITDA. Given the company’s historic EV/EBITDA range, we’re at a reasonable valuation although I would prefer to buy the stock roughly 10% lower due to the economic risks that could cloud the outlook a bit.

The current dividend yield of close to 1.8% is one of the highest ever due to the 77% raise (the graph below is NOT up-to-date).

Given the macro-economic circumstances, watch for the yield to get close to 2% before buying. At least, that’s my strategy. If you are in it as a long-term investor, I don’t think that buying some shares at current prices is a bad idea. Just make sure to buy in intervals to spread the risk if you want to avoid timing the market.

I have been a fan of the Tractor Supply Company in the past, now I’m close to making it the second consumer-focused stock in my dividend growth portfolio. The company is not just a retailer, but a DIY store focused on rural Americans, which will continue to be a hot market for the foreseeable future. Not a lot of companies are as well-positioned to benefit from this uptrend as TSCO due to its advanced knowledge and streamlined operations that have not only resulted in efficient supply chains but also high consumer satisfaction and all benefits that come with it.

The company hiked its dividend by 77%, pushing its yield close to 2.0%. Yet, dividend growth is far from over. TSCO is in a terrific spot to continue long-term dividend growth close to 20% per year, which will turn a 1.8%ish yield quickly into a yield that generates satisfying income for investors. It also helps that its debt load is sustainable.

With that said, I am ready to buy the stock as soon as the yield hits 2%. I believe that consumer stocks have the potential to fall more due to inflation and the impact this has on consumers and the Federal Reserve, which could hike rates into economic weakness.

If you’re already long, don’t worry but use weakness to add to your exposure. This company has decades of growth ahead of it.

Note that my “bullish” rating applies to the longer-term outlook as it may be confusing given my comments on the (short-term) economy.

(Dis)agree? Let me know in the comments!