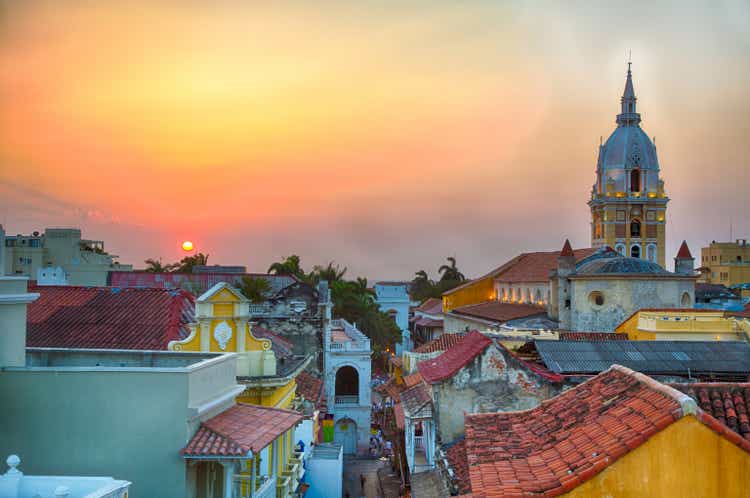 How do you become a millionaire? Become a billionaire and invest in Latin America. I have normally heard that joke told in conjunction with investing in airlines, but the punchline works with Latin American stocks as well. Given the past decades poor performance, this article takes a look at the macro drivers of investing in the region as well as two stocks that look cheap presently and are secular compounders. Investors may wish to add them to their watch lists or dollar cost average into the names while waiting for the current strong dollar environment we currently find ourselves in to abate.

The recent surge in commodity prices following 2020 lockdowns has left its mark on the global economy this year and contributed to inflation levels not seen in the developed world for decades.

Commodity prices are still high compared to recent history, but are no longer surging higher. Yet, with the currencies of many Latin American countries never rallying hard with commodity prices and share prices down about two-thirds in U.S. dollars since peaking a decade or more ago, whether Latin American emerging markets are a good diversifier right now to U.S. stocks is not the worst question an investor could ask.

When investing in developed markets, particularly when investing in your own currency, the micro trumps macro in the long run. Even though there is no reason to ignore the micro in emerging markets, the macro has to at least be a strong consideration. It is very difficult to make much money in Latin America during periods of dollar strength.

Most emerging markets have significant need of dollar funding and a rising dollar removes liquidity from local markets and economies. Predictably, the last bull and bear waves in emerging markets coincided with dollar strength and weakness with 1995 to 2002 being an exceptionally weak period, 2002 to roughly 2011 being relatively strong and the period since then being another protracted bear market.

Many bottoms up indicators look positive. Valuation, for example, is quite attractive in many markets – most particularly Chile and Colombia where current CAPE ratios are 30% to 40% below long-term averages. While CAPE ratios are notoriously terrible at predicting short-term stock movements, they do have predictability when considering longer-run returns.

The political backdrop has also caused many investors to pause from investing in the region. Sometimes this is for good reason, but most Latin American countries have the institutional fortitude to avoid becoming Venezuela or Cuba and the election of leftist or populist leaders if often less of a concern than feared. Peru recent election of Pedro Castillo, a self described Communist, has turned out to be much less of a watershed than feared, as he has been constrained by Peru’s legislature. Similarly, despite headlines and some policies that are unfriendly to business and markets, markets such as Mexico, Peru, Colombia, Brazil, and Chile can be investable.

It is certainly reasonable to ask why bother with emerging markets, or Latin America specifically, given the greater complexity and greater volatility. The simple answer is that if you get the cycle right, the returns to the upside can be enormous. During the last bull market, the typical large cap Latin American stock was up about ten-fold. We are clearly not quite ready for another bull market to emerge. But, with the dollar’s bull market now about a decade long and valuations for many Latin American stocks quite low, it would not be completely unreasonable to think that when the current Federal Reserve tightening cycle ends that you could see the beginnings of a bear market in the dollar and beginnings of a bull in emerging markets stocks. While near term caution is still warranted, there are some names that are probably worth averaging into or at a minimum keeping on the watch list. Here are some to consider.

Among, large cap Latin American stocks, Femsa (FMX) may be the highest quality. Originally founded as a brewery in the 19th century the Monterrey, Mexico company today operates convenience stores, drug stores, about half of Coca-Cola Femsa (KOF), a Coke bottler, and 15% of Heineken (OTCQX:HEINY). The company has also been expanding in the United States through the acquisition of some distribution and supplies businesses. Femsa is a fantastic compounder, with revenues between 2010 and 2020 growing by 11% per year in local currency and EBITDA by 10%.

The convenience store business, mostly under the Oxxo brand, is a fantastic business. It is the second largest retailer in Mexico and also operates in Colombia, Chile, and Peru. The drug store business is less profitable (~10% EBITDA margins versus ~15% for convenience stores) but has grown at a 25% rate the last five years and has significant room for growth ahead.

Until the pandemic, the FEMSA ADR that trades in New York had been stuck at the $100 level for about six years after pulling back from a peak of a little more than $120 in 2013. Despite initially recovering some of its 2020 losses, shares are now under the $70 level, the same price at which they could have been purchased in 2012. We can blame currency for a part of that performance (one USD has gone from buying 12 Mexican pesos to about 20 during that time frame), but given the roughly 11% per year growth in the business in local currency this past decade, there has still been substantial multiple contraction.

Analysts are expecting full year earnings of $3.75, followed by $4.60 next year, and $5.55 in 2024. That equates to multiples to earnings of 18x, 15x, and 12x for a company that has often touched a multiple of 30x and which has a longer term average multiple of about 25x. Placing a 25x multiple on next year’s earnings gives you a fair value of about $115, which you may want to discount some given that we are not yet in 2023. Still, it is hard to come up with a fair value much less than $100 on FEMSA right now even for a conservative analyst. Fellow Seeking Alpha contributor Paid to Wait, recently placed a value on FEMSA of $100 per ADR using a sum of the parts approach.

Patient investors should do extremely well in FEMSA over time, particularly if the dollar cycle turns and the 10%-11% compounded sales and EBITDA gains in local currency are combined with both multiple expansion and favorable currency movements.

Another company that operates in an attractive industry and is worth at least being placed on a watch list is Compania Cervecerias Unidas, or United Breweries Company. Based in Santiago, Chile, the company was first pointed out to me by fellow contributor Ian Bezek.

CCU produces and distributes alcoholic and non-alcoholic beverages in both Chile and some foreign markets and additionally has a wine business. The non-Chilean beverage business is conducted in Argentina, Uruguay, Paraguay, Bolivia, and Colombia.

The company produces some of the most popular Chilean beer brands such as Cristal and Escudo as well as Chilean fruit flavored soft drinks such as Bilz and Pap. Within Chile, proprietary brands make up almost 70% of sales. But, if you are not Anheuser-Busch InBev (BUD) or Coca-Cola (KO) there is also a good chance that you will need to go through CCU to distribute your products. The other 30% of Chilean sales come from licensed distribution agreements with Pepsi (PEP), Heineken (OTCQX:HEINY), Nestle (OTCPK:NSRGY), Pernod Ricard (OTCPK:PRNDY), Red Bull, and MillerCoors (TAP). The company estimates they have a 46% market share for beverages within Chile.

CCU also has a strong portfolio of Argentine beer brands in their international business such as Schneider, Imperial, and Palermo in addition to distributing Heineken and MillerCoors products. CCU also recently purchased almost half of Danone’s Argentinian water business, distributes products in a few other smaller South American countries, and has a joint venture in Colombia with local beverage company Postobon.

Last year, 69% of EBITDA was from the Chilean business, 20% from the international business, and 10% from the wine business, which includes vineyards in both Chile and Argentina.

Volume has grown consistently at about 7% per year for twenty years now, with net sales in local currency growing at 11% per year and net income at 12% per year. Despite this performance, CCU has suffered a similar fate as FEMSA has during this past decade of strong dollar, weak emerging markets performance.

A similar chart to the one showed for FEMSA above plots the valuation journey for CCU since 2013.

Estimates next year of $1.12 per ADR in earnings imply a forward multiple of only 11x earnings. That is quite a discount to Brazilian brewer Ambev (ABEV) which trades for 18x next years earnings and at an EV/EBITDA multiple of about 8x. Similarly, Ambev’s parent BUD is trading for 16x and 11x respectively. I think a mid to high teens multiple is extremely reasonable for CCU and would put a value on shares of about $19.

Macro cycles are next to impossible to predict with precision, and I think there is likely still some more dollar strength to play out before we see a secular shift and emerging markets set course on a new bull run. The long term compensation for enduring some volatility is the potential for seeing multiples expand, currency movements add to gains, and earnings growing strong in local currencies for strong businesses. While caution may still be warranted, dollar cost averaging into businesses such as FEMSA and CCU while waiting for the cycle to turn may not be a poor strategy at present for USD investors.