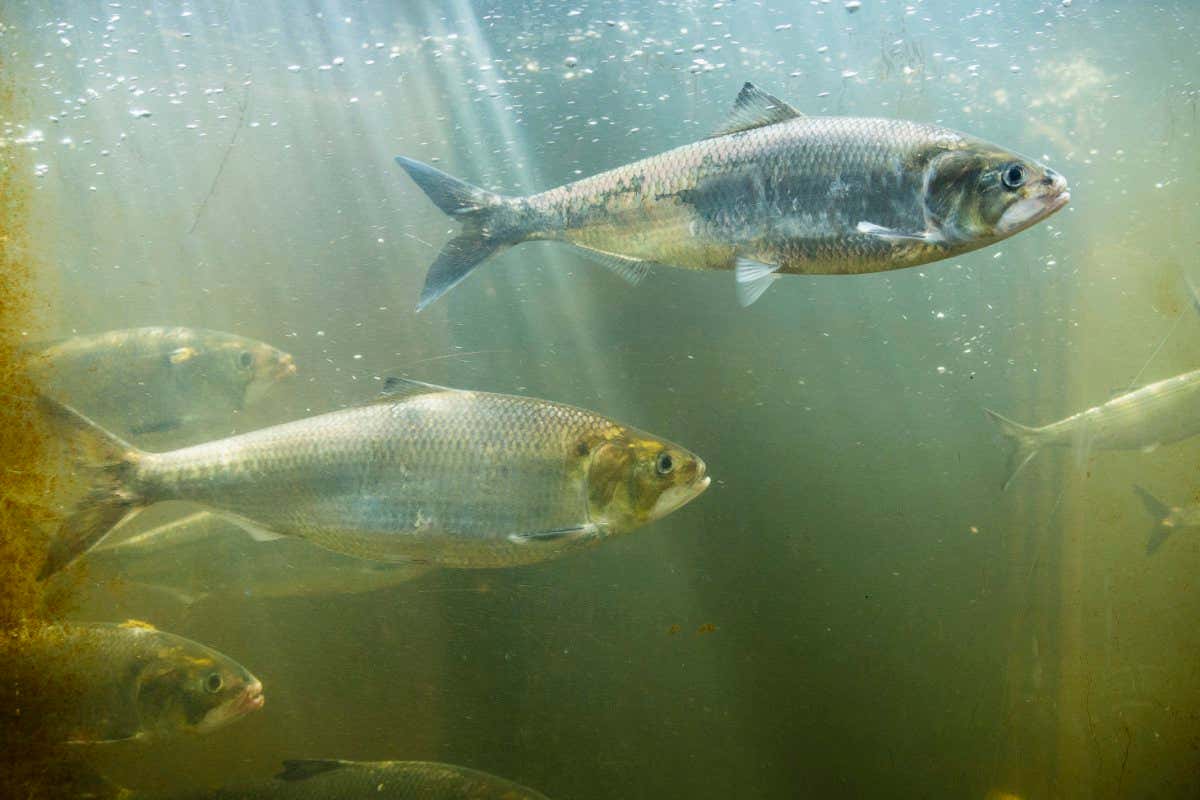 Models suggest the arrangement of American shad in a shoal amplifies the ultrasonic clicks that dolphins use to hunt, helping the fish detect and evade these predators

A school of American shad may function as a giant ear that enables the fish to hear the ultrasonic clicks of hunting dolphins.

Not many fish species are able to hear ultrasound, says Kourosh Shoele at Florida State University. American shad (Alosa sapidissima) can, and seem to use that ability to evade dolphins, which detect prey by listening for reflections of their clicks. “Very few of the fish found in the stomachs of dolphins are shad,” says Shoele’s student Yanni Giannareas.

Experiments suggest the hearing of individual shad isn’t sensitive enough to pick up on dolphin clicks. But if they swim together, this changes, Shoele says. The team’s computer model suggests the school acts as a finely tuned echo chamber for the incoming sound. The sound waves bounce off the regularly spaced fish, and those reflections interact in such a way that their energy gets concentrated in a regularly spaced pattern as well.

Each fish ends up with a spot of amplified sound right next to it. This enables the American shad to detect a dolphin’s sonar sooner and together start evading it.

Giannareas presented preliminary results at a meeting of the American Physical Society Division of Fluid Dynamics in Phoenix, Arizona, in November.

David Mann, a biologist who is now president of Loggerhead Instruments, an underwater acoustics firm in Sarasota, Florida, was the first to establish that this shad can hear ultrasound, in a study published in 1997. He isn’t convinced that an individual shad would be clueless about an approaching dolphin.

“The shad ultrasound sensitivity is not super great, but dolphins also click at very high source levels,” he says. “The idea of increasing sensitivity of a school of fish to ambient sounds is interesting and leads one to think about experiments to test it.”

Shoele and Giannareas hope their model will show biologists what to look for. The configuration of a school of American shad could provide evidence for this collective hearing ability. If they are optimising their spacing for sound detection, they would swim in a different formation from, for example, similarly sized tuna, a fish that behave like shad but can’t pick up ultrasound.