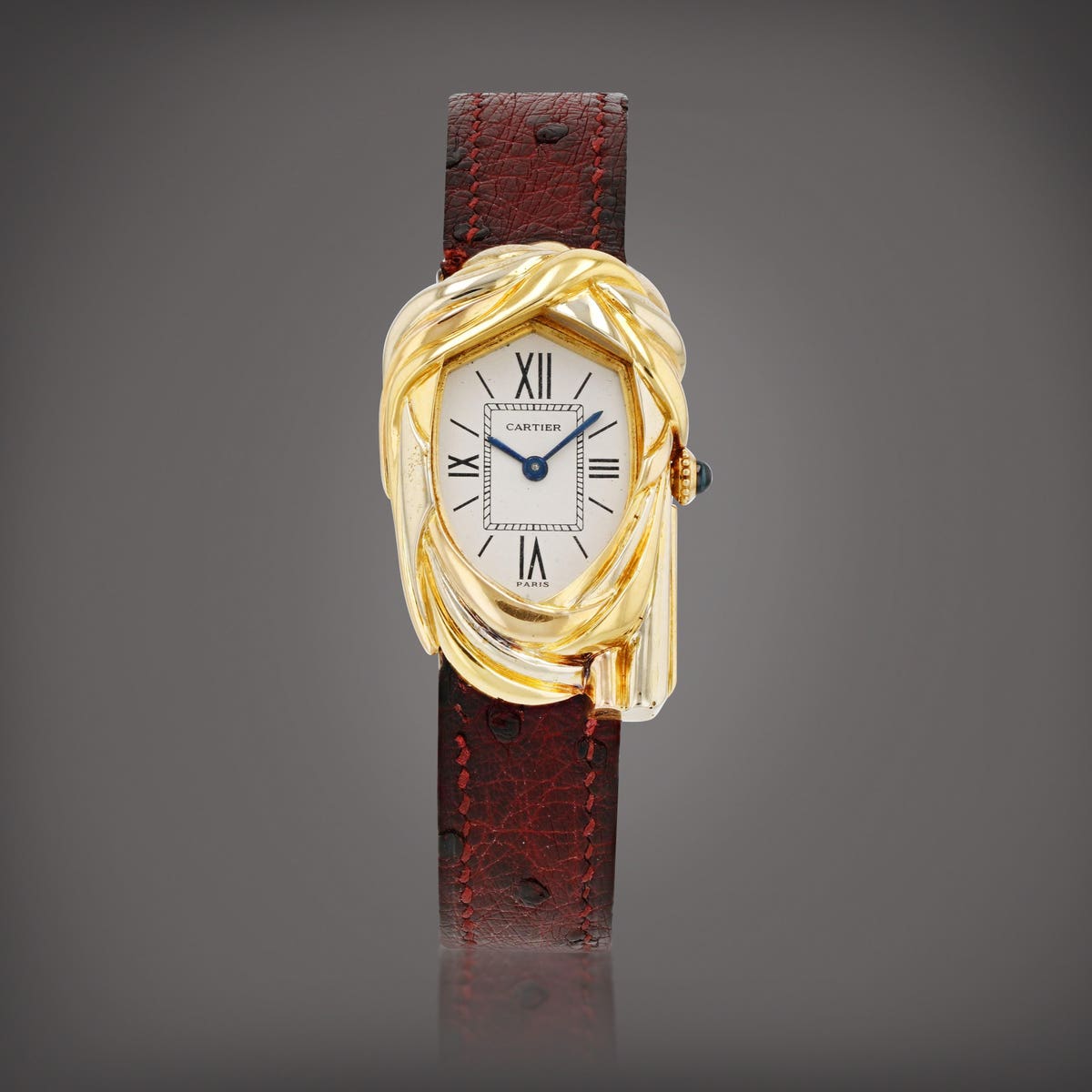 The Cartier Cheich is as much a trophy as it is a timepiece. It was awarded to the person who won two consecutive Paris-Dakar races, in what was known as the Cartier Challenge. A feat believed to be impossible until Belgian motorcycle racer, Gaston Rahier, won the Paris-Dakar in 1984 and in 1985, making him the first and only winner of the Cartier Challenge. His reward was being the sole recipient of the uniquely designed Cartier Cheich watch celebrating his achievement.

It will appear in public for the first time in 40 years as the top lot in Sotheby’s Paris Fine Watches auction. Online bidding will open September 16 with the final live sale on September 30. This hybrid bidding model has been used by the auction house since the coronavirus pandemic. Its estimate is $200,000 – $400,000.

Cartier specializes in the design of watch cases and the Cartier Cheich is one of its most celebrated and unique designs.

The Cartier Cheich was created to reflect the spirit of the original Paris-Dakar, a grueling 10,000-kilometre (6,200 miles) race from Paris through the Sahara Desert to the Dakar, Senegal. It was open to amateurs and professionals in three categories: cars, trucks and motorcycles. Finishing the race was considered an achievement much less winning in two consecutive years. In recent years, the name of the event has changed to the Dakar Rally and its course altered due to possibility of terrorist attacks and the extreme difficulty of the original course.

The Cartier Cheich was designed by Jacques Diltoer, former creative director of Cartier and Alain-Dominique Perrin, Cartier president at the time. The design was inspired by the rally’s logo featuring the silhouetted face of a Tuareg (a native of the Sahara Desert) wearing a “cheich,” a traditional piece of cloth worn around the head as protection against the sun.

Four models were created. The original two Cartier Cheich watches were designed in 1983, for a male and female winner. The male timepiece was awarded to Rahier. The smaller female watch was never awarded because there was no other consecutive winner of the race. A third was created in 1985 for another possible future champion. A fourth piece was offered by Perrin to Thierry Sabine, who founded the race. However, it’s believed that this watch may have been given to Hubert Auriol, a famous French motorbike race driver, but it is now considered lost. Production of the Cartier Cheich ended in 1986 after Sabine was killed in a helicopter crash in Mali caused by a sandstorm. The other two Cartier Cheich watches remain in Cartier’s collection.

This leaves the Rahier’s watch as the only one that will ever be on the market. It is being offered by the family of the motorcross champion.

While the four watches were created for the Cartier Challenge and shared similarities in its overall aesthetic, each had its own details. The Cartier Cheich being sold has a curved triangular shape surrounded by the elaborate cheich design in yellow, rose and white gold, the “trinity,” which represent the Cartier symbol of love, friendship and fidelity. The unique shape of the case meant that traditional lugs could not be used for attaching the leather strap. Instead, the back of the case was carved to allow the strap to slide through the case. Inside, the lid is marked Trophée Paris Alger Dakar under the Cartier signature. The dial is largely in the traditional Cartier signature style, with a center rail and baton and Roman Numerals as hour markers.

The watch comes in its original box: a bespoke presentation case in Cartier signature red with gold detailing.

The watch had appeared in Monaco in July and will be shown in Paris prior to the auction.