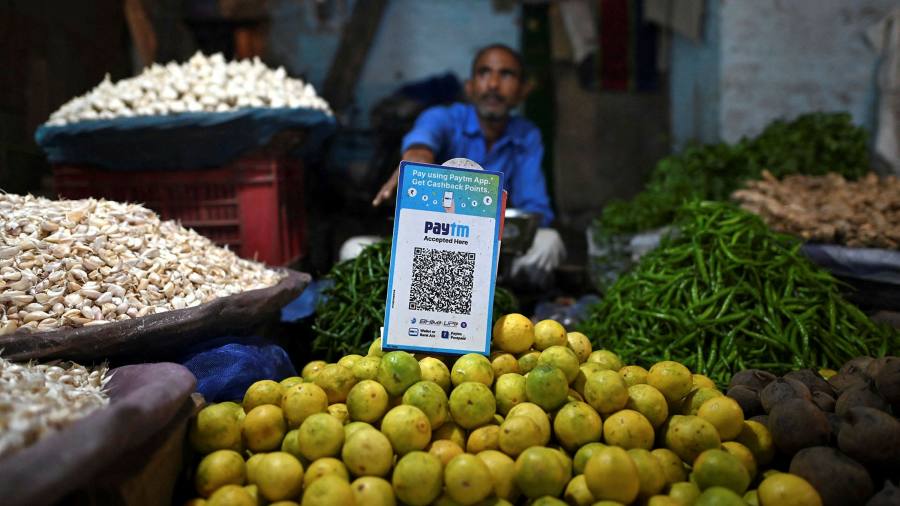 This article is an on-site version of our #fintechFT newsletter. Sign up here to get the newsletter sent straight to your inbox every Monday

Hello readers, and I hope you’re having a good start to the week!

In this edition of FintechFT, Chloe Cornish asks a big question: whether fintech has helped to rescue democracy in India. We also have news on a US regulator warning on Apple’s push into lending, and I speak to Duncan Stevens, chief and co-founder of Gretel, a platform which helps people find assets which they may have forgotten about or not know how to access.

As ever, reach out to Imani (imani.moise@ft.com) and me (sid.v@ft.com) with your thoughts, suggestions and comments. We’ll be back again next Monday. Happy reading!

This gargantuan claim was made a week ago at New Delhi’s FinTech Festival India by Rajeev Chandrasekhar, India’s minister for Electronics and Information Technology, Skill Development and Entrepreneurship.

“Our democracy was seen as dysfunctional,” Chandrasekhar told the audience, alleging that corrupt officials under previous administrations had siphoned off government funds. But, he claimed, second-term prime minister Narendra Modi’s “Digital India vision has dramatically transformed the way governance is carried out in the past seven years”.

The minister was talking about schemes like Pradhan Mantri Jan-Dhan Yojana, “the national mission for financial inclusion”. This programme, which began in 2014, lets the government pay benefits directly into special bank accounts opened for citizens who previously had no access to financial services. A whopping 460mn people use the scheme, according to government figures, with most in rural or semiurban areas.

Yet Aadhaar’s role in accessing services such as booking train tickets have made it a powerful surveillance tool, say critics who have described it as a “big brother”-like risk to privacy and a threat to an open democratic society.

Still, India has leapfrogged the rest of the world in digital payments, which leave much less room for corruption. Forty per cent of global digital payments are happening in India, according to Modi’s remarks on Friday. One programme that enables such payments in India is the Unified Payments Interface, born in 2016 in a collaboration between commercial banks and the Reserve Bank of India, which allows for instant cash transfers using a smartphone.

You can scan a QR code for a payment of less than a dollar for auto rickshaws, tiny mom-and-pop corner shops — even to buy a coconut on a beach in Goa, or a sanitary pad at Ahmedabad airport in Gujarat.

UPI is super cheap and extremely popular — within three years of launch it was responsible for a quarter of all digital payments in the country. By contrast, there are still places in the US where you are required to sign for your card with old-fashioned pen and paper.

So can we believe Chandrasekhar’s boast that the Indian government has used financial technology to bolster democracy and improve trust in government?

It does seem to be true that widespread graft — or at least the public perception of it — has come down somewhat in India over the past decade. India’s score on Transparency International’s corruption perception index strengthened from 36/100 in 2013 to a high of 41 in 2019, before slipping back slightly in 2020 to 40. But that’s still a very low score, despite the improvement.

And recent arrests of journalists and Twitter’s legal tussle with the government over online censorship has made the strength of India’s democratic principles a topic of hot debate. Fintech might be able to reduce corruption — but it seems a stretch to say it can make democracy less dysfunctional. (Chloe Cornish)

US regulator fire a warning shot to Big Tech lender Stefania Palma reports that Rohit Chopra, director of the Consumer Financial Protection Bureau, has warned that Apple’s entry into the buy now, pay later space of short-term credit risks undermining competition and raises questions about the use of data. The launch of Apple Pay Later in the US last month marked another push into financial services by the Silicon Valley company — which already offers a credit card with Goldman Sachs and Mastercard.

South Korean probe into $3.1bn crypto-linked forex transactions Regulators are investigating unusual currency transactions worth Won4.1tn ($3.1bn) which took place at two banks in the country, writes Song Jung-a. Most of the transactions involved crypto exchanges and a local company, a reflection of global authorities’ growing scrutiny of the ties between traditional finance providers and the cryptocurrency industry.

Jack Ma plans to give up control of Ant Group A planned initial public offering for China’s fintech giant has hit another roadblock with news that its founder plans to step back, Ryan McMorrow and Cheng Leng report. Ma’s retreat from the top spot comes almost two years after Beijing demanded that the group restructure operations, derailing what would have been a blockbuster listing.

Every week we ask the founders of fast-growing fintechs to introduce themselves and explain what makes them stand out in a crowded industry. Our conversation, lightly edited, appears below.

I recently spoke to Duncan Stevens, chief executive and co-founder of Gretel, a fintech which aims to help people to find lost assets including pensions, investments and accounts. Across the UK, 20mn people have lost assets totalling an estimated value of $50bn. In March, the company raised $1mn in pre-seed funding from investors including Insurtech Gateway and RLC Ventures. The platform launched in April 2022, and is free to customers, being funded by product providers such as banks and building societies on the platform.

Where did the idea for Gretel come from? The traditional way of solving the problem [of finding lost assets] can be very expensive and very time consuming. What the industry has been screaming out for is simplification and centralisation, which is something the government should have done years ago. The Financial Conduct Authority has said that 24mn people are classified as [financially] vulnerable in some way, and we think that this fits nicely with its new consumer duty. One of the problems is that a lot of people don’t think that it applies to them, but even if think they’ve lost something, they’ve got no idea about how to find it.

What are the types of assets which people find? We get a lot of people looking for child trust funds and for bank accounts, although less looking for pensions. Shares are a bit of an odd one — it’s an archaic industry, and there’s [quite a few people] who have paper share certificates. You had a whole generation who didn’t know about share ownership suddenly picking them into the 1980s, and they may lost those certificates since then. Trying to figure out which companies have taken over others and things like that confuses the living daylights out of people.

What are your next steps? The immediate plan for us is to effectively get the biggest organisations in the sector [such as the high street banks] on the platform. It’s that well-worn adage — around 5 per cent to 10 per cent of companies will account for 80 per cent to 90 per cent of the value and volume [of assets]. We are looking at replicating our work with the investment space in other areas, working in terms of pensions as well as with banks and wealth managers. We are looking to offer more support for vulnerable customers, and for the expat community. We are also looking to give people such as lawyers, executors and those with power of attorney the ability to do searches as well.