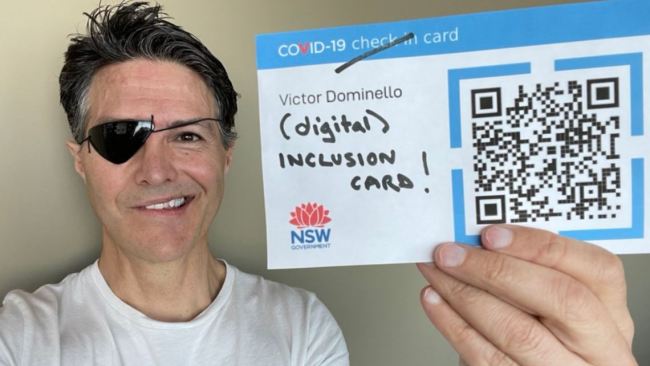 Victor Dominello – who is currently wearing a black eyepatch and on medication – feels “very fortunate” the community drew attention to his droopy eye during a COVID-19 press conference.

Victor Dominello has donned an eyepatch after announcing his Bell’s palsy diagnosis – thanks to the help of eagle-eyed TV viewers who spotted his “droopy eye”.

The NSW Customer Service Minister said he received numerous comments of concern following Wednesday’s COVID-19 press conference, which encouraged him to see a doctor and led to his subsequent diagnosis.

On Monday, the member for Ryde shared an update – with a smiling selfie showcasing his black eyepatch – as he promoted Service NSW’s check-in card.

“A profound thank you to all the people who have shared their experiences and well wishes for my recent diagnosis of Bell’s Palsy,” he wrote alongside the snap.

“I am on medication and feeling very fortunate that the community brought the seriousness of the situation to my attention.

“Also given the feedback received from many people with lived experience – I am also having acupuncture. I am hoping to make a quick recovery.”

Mr Dominello said the patch is on his right as it is the side of his face that has been frozen. The patch will stop his eye from getting infected until he is able to start blinking with it again.

The Minister earlier thanked residents who drew attention to his condition in his first place.

“At this morning’s press conference – a number of people commented on my droopy eye,” he wrote on social media on Wednesday.

“Some people thought – I was winking at the cameraman. Some thought I had a stroke.

“I have actually been diagnosed with Bell’s palsy.”

Mr Dominello explained he began to feel a pain in his skull, behind his right ear, about 48 hours earlier.

On Wednesday morning, he woke up with pins and needles on the right side of his tongue but failed to notice any droopiness around his eye.

“I only took it more seriously this afternoon – after a number of people sent me a screenshot of the press conference and others contacted my office prompting me to seek urgent medical advice,” he said.

“Thanks to everyone who reached out.”

Bell’s palsy is a sudden weakness or paralysis in one side of the face that is typically caused by inflammation or damage to the facial nerve.

The condition is usually temporary.