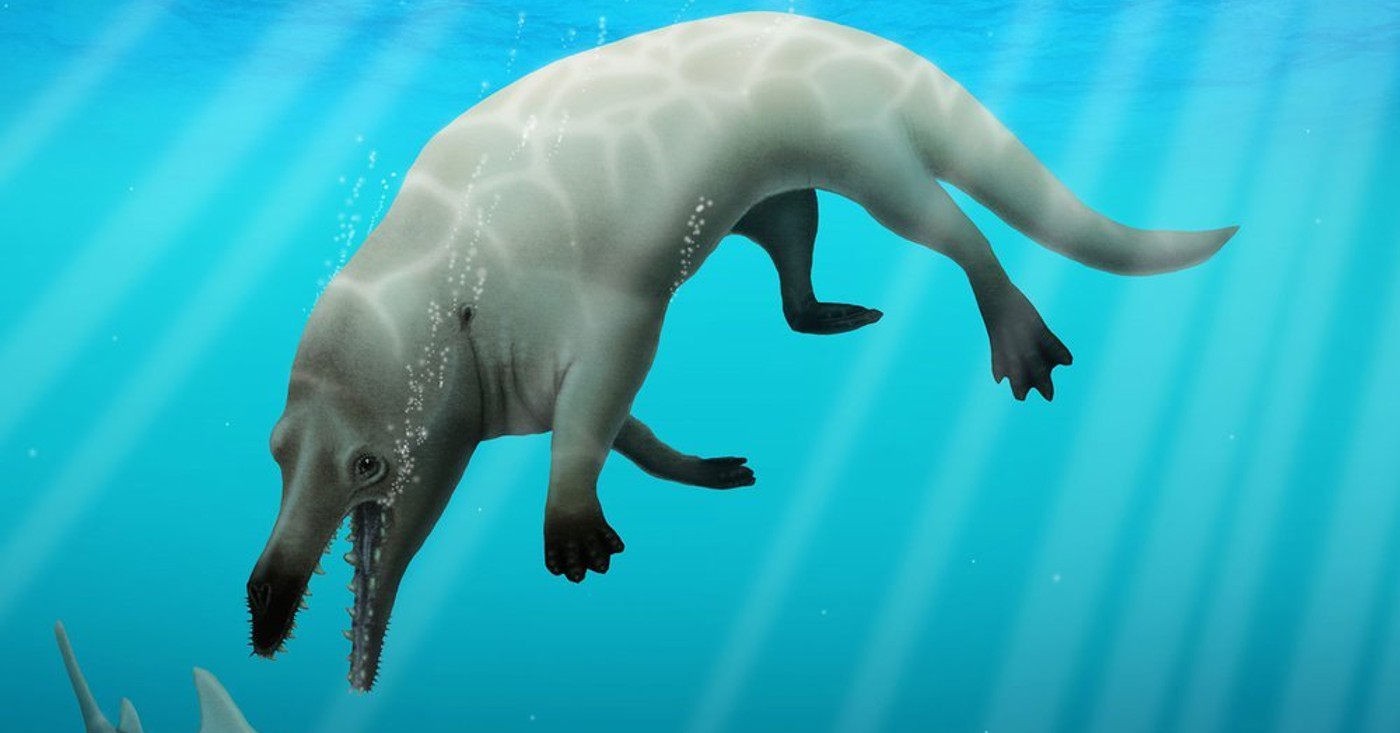 A tooth found nearly fifty years ago has recently been re-examined and found to contain the remains of a land-going whale from an extinct family found only in Pakistan.

A cousin of other walking whales in the family of Remingtonocetidae, it’s the first discovery of this ancient animal in North America, and gives a tantalizing prospect of a potential distribution of these creatures across the entire world.

It’s strange to think that as mega as so many of the dinosaurs became, the largest example of the advantages of enormity to a complex life form is alive with us today in the form of the blue whale.

Yet the whale lineage had to take many twists and turns before it arrived at a blowhole and flippers, which because of its mammalian origin, also involved feet and a long, almost crocodilian snout.

In 1973, a premolar of a new species of walking whale was found at a stone quarry in Castle Hayne, North Carolina.

In 2020, a team of researchers found it matched more closely the fossils found in Pakistan of Remingtonocetidae and not other extinct whale genera that were known to live along the coast of what would become North America.

Remingtonocetids lived in the Tethys Ocean, a body of water that existed for half a billion years along the shore of an ancient super-continent called Gondwana which contained all the land that would form Africa, India, Australia, South America, and Antarctica. By the time of the Eocene, when this new species was discovered, the Tethys Ocean was a tiny fraction of what it once was, perhaps allowing the normally coastal animal to leave its Indo-Pakistan territory and venture as far as North Africa.

Paleontologists from Egypt discovered a walking-whale in North Africa in 2008, and in 2019 another specimen was found in Peru. The animals tended to average around 10 feet, or 3 meters in length, and have powerful jaws that are suggested to have been enough to allow the beasts to prey on crocodiles.

“This fossil really starts to give us a sense of when whales moved out of the Indo-Pakistan ocean region and started dispersing across the world,” Professor Jonathan Geisler told Live Science about Phiomicetus, the Egyptian-based walking-whale, after its discovery.

Rather than phiomicetus, Uhen believes the closest dental-match is drawn with Remingtonocetus harudiensus, discovered in the 1980s by a pair of scientists who first described these unique legged-whales. This would mean, if true, that while other whales crossed the Tethys to arrive near Egypt, or crossed the whole of the Eocene Atlantic Ocean to arrive in Peru, some of these proto-whales arrived in North America straight from Pakistan.

“The first phase of cetacean evolution is, for the most part, the story of adaptation to the aquatic environment,” writes author and paleontologist Mark Uhen at George Mason University. “Changes in feeding, sensory systems, and locomotor systems are apparent in all of the lineages of middle Eocene cetaceans.”

“The potential discovery of a remingtonocetid from North America extends a third family of [proto whales] across the Atlantic and suggests that the aquatic abilities of remingtonocetids may have been better developed than previously thought.”

SHARE This Fascinating Story of Evolution With All Your Friends…