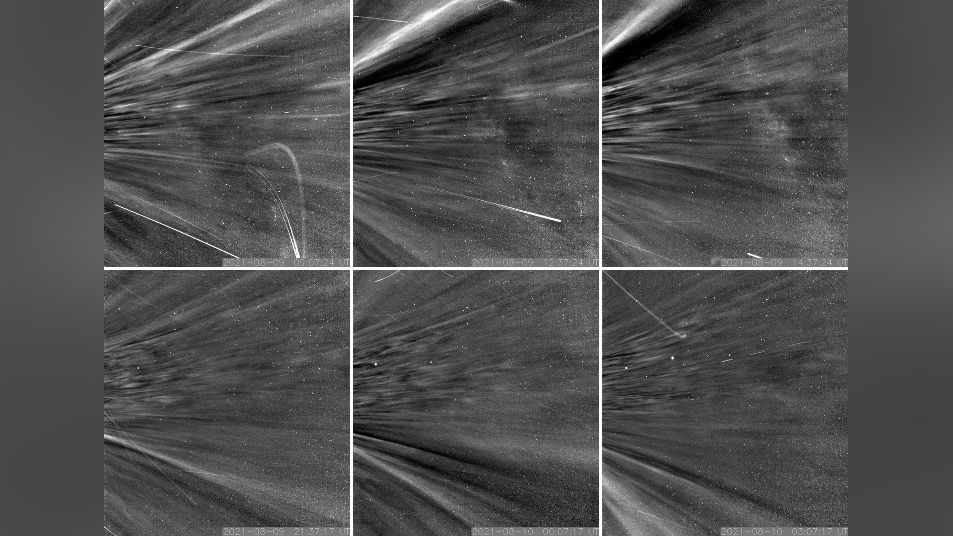 The new NASA video from the Parker Solar Probe shows these mysterious sun structures up close for the first time, flowing past the spacecraft like interstellar fireflies. Previously, we could only catch a glimpse of streamers during solar eclipses.

But with Parker specially shielded for heat-searing passes by the sun, the spacecraft has been making daring approaches closer and closer to our starry neighbor, finally reaching inside the corona during an April flyby.

The detailed data from that pass-through, released last month, showed a bunch of streamers, said the Johns Hopkins University Applied Physics Laboratory in a statement on YouTube with the video.

“These structures can be seen as bright features moving upward and downward in this video compiled from the spacecraft’s WISPR [Wide-field Imager for Parker Solar Probe] instrument,” the laboratory said. WISPR is designed to study the density of charged particles like electrons, as well as the coronal structure.

Related: The solar system: Facts about our cosmic neighborhood

Parker is on a larger quest to better understand solar physics, and especially how the solar wind is generated. The solar wind is a set of charged particles constantly streaming from the sun throughout the solar system; at Earth, they influence everything from auroral activity to radiation risks for satellites and astronauts.

In April, the spacecraft passed as low as 15 solar radii from the visible surface of the sun, called the photosphere, during which it spotted a “pseudostreamer,” one of the huge structures you can see from Earth during total solar eclipses.

“Passing through the pseudostreamer was like flying into the eye of a storm,” NASA said in a statement, noting that in that zone, Parker experienced quieter conditions and fewer particles compared with other flybys.

Parker’s next close flyby is expected later this month.