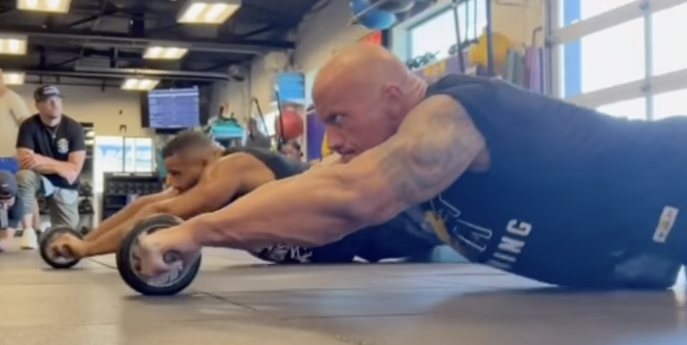 Dwayne “The Rock” Johnson has just shared another look at the day he spent training with L.A. Rams defensive tackle Aaron Donald in a new Instagram video, focusing in particular on a set of core-torching ab wheel rollouts. Both men perform this move in a series of rapid, impressively synced-up movements, but it’s important to remember that form is everything with this exercise, and that it is a test of your hip stability as much as core strength.

The video was captured during a recent visit to the Rams’ training facility as Donald and his teammates get ready for the new NFL season to begin, and Johnson was struck by the similarity in how their respective backgrounds influence their approach to training.

“We’re cut from the same intense cloth with our passion for training, family and LEGACY,” he wrote at the time. “But what really moved me about Aaron, is realizing how we were both raised by very similar fathers who taught us at the exact same age – there is no substitute for hard work, through discipline and tough fatherly love. Little boys. Cold steel. Life lessons.”

The clip also offered another insight into Johnson’s current listening material. Having previously shared the mix of heavy metal and hip hop on his Iron Paradise playlist—as well as his own rap debut in Tech N9ne ‘Face Off’—it looks like he’s added ‘Grinding All My Life’ by Nipsey Hussle to the mix.

Philip Ellis is a freelance writer and journalist from the United Kingdom covering pop culture, relationships and LGBTQ+ issues. His work has appeared in GQ, Teen Vogue, Man Repeller and MTV.