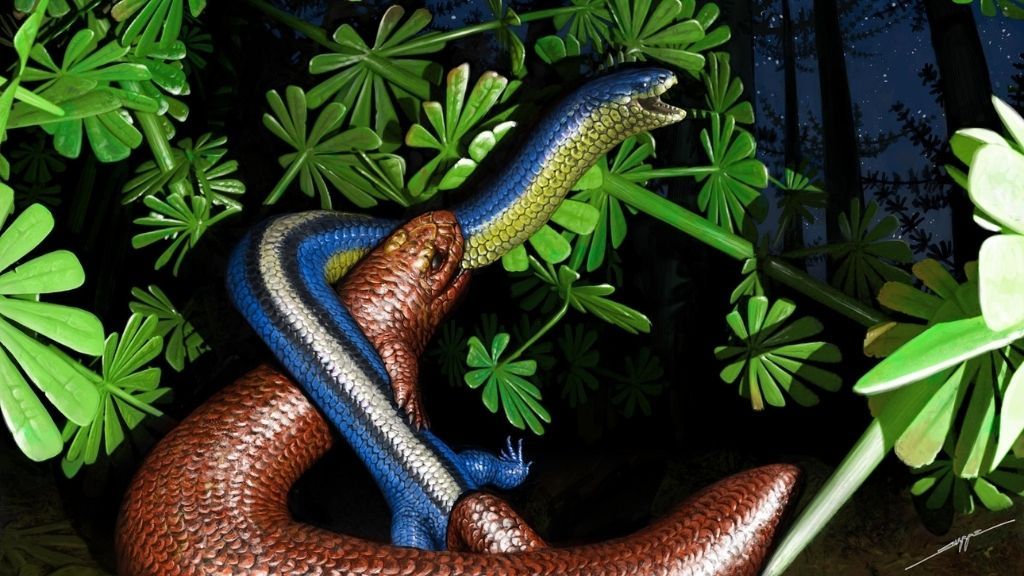 Scientists just lately recognized these distinctive fossils as a newfound genus and species, which they named Nagini mazonense in a brand new research printed Monday (March 28) within the journal Nature Ecology & Evolution. The specimens characterize the earliest identified examples of evolutionary limb loss in amniotes — animals that produce embryos protected by an amniotic sac, a bunch that features mammals, birds and reptiles.

It’s uncommon to search out such transitional kinds within the fossil document, to “catch something in-between” a four-limbed animal and limbless animal, lead study author Arjan Mann, a vertebrate paleontologist and postdoctoral fellow at the Smithsonian National Museum of Natural History (NMNH) in Washington, D.C., told Live Science.

N. mazonense belongs to a group of long, thin animals called the molgophids, the authors determined. Previously, Mann and other researchers had identified a few molgophid fossils that had shortened forelimbs with missing digits, but N. mazonense is the first member of the group with completely absent forelimbs and a missing pectoral girdle, the bony structure that would normally connect the forelimbs to the skeleton.

“It’s totally different than the rest we knew,” Mann said of the newly-named creature.

The two N. mazonense fossils were originally excavated from the Mazon Creek Lagerstätte, a famous fossil site in northeastern Illinois that is about 309 million to 307 million years old, meaning it dates back to the Carboniferous period. An expansive estuary once covered the region, and its soft, claylike sediments would often bury animals that would then fossilize, Mann said. Mazon Creek fossils are typically found encased in lumps of siderite, an iron carbonate mineral, and are exceptionally well preserved, according to NMNH.

Both N. mazonense fossils that were described in the new study were found in a specific area within the Mazon Creek Lagerstätte called Pit 11, where there was once a coal mine, Mann said. They were then housed in two different museums: the Milwaukee Public Museum (MPM) in Wisconsin and the Field Museum of Natural History in Chicago.

The fossil in the Milwaukee collection included the front half of the animal’s skeleton, while the fossil housed in Chicago was significantly more complete and “preserves substantial stays of sentimental tissue along with the skeleton,” Mann and his colleagues reported. Based on impressions left by soft tissue in the surrounding stone, the team determined that N. mazonense likely had a rounded snout that was well suited for head-first burrowing. The Field Museum’s fossil also retained its rear pelvic girdle and one hindlimb with four tiny toes.

Based on the relative sizes of the two specimens, the team determined the MPM fossil to be an adult and the Field Museum’s to be a juvenile. The scientists estimated that a fully grown adult N. mazonense could grow to be about 4 inches (10 centimeters) long, with 85 vertebrae and 85 pairs of ribs. Because the animals lacked front limbs, the study authors hypothesized that the creatures mostly moved by sidewinding — a wave-like motion seen in some modern snakes — and potentially used their back legs to stabilize their bodies while burrowing, Mann said.

Mann previously described two related creatures that had been excavated from Mazon Creek, naming these molgophids Diabloroter (meaning “satan digger”) and Infernovenator (“hell hunter”), in line with a 2019 assertion from Carleton College in Canada, the place Mann was on the time pursuing his doctorate. These different fossils confirmed indicators of progressive limb shortening and lack of digits; the truth is, the animal referred to as Infernovenator steenae retained just one bone in its forelimb, Mann wrote in a assertion accompanying the brand new research.

“This hints that total discount of limb measurement and lack of distal limb modules could have preceded full lack of the limb,” as seen in N. mazonense, Mann wrote. And although N. mazonense and other molgophids are not ancestors of modern snakes, this pattern of limb loss parallels some aspects of snake evolution.

Specifically, in the early stages of modern snake evolution, snakes initially lost their front limbs and front pectoral girdles before losing their back limbs, just like the molgophids did. This hints that this snake-like pattern of “forelimb-first” limb loss is not actually unique to snakes, but instead appeared in some of the earliest branches of the amniote tree of life, Mann told Live Science.

“Snake embryos, resembling pythons, nonetheless kind hindlimb buds that disappear throughout growth,” Rolf Zeller, a analysis group chief on the University of Basel in Switzerland who was not concerned within the research, advised New Scientist. “The discovery of an historical snakelike fossil missing forelimbs however retaining hindlimbs is a improbable discover, as a result of it reveals the existence of transitional kinds earlier than full limb loss throughout evolution.”