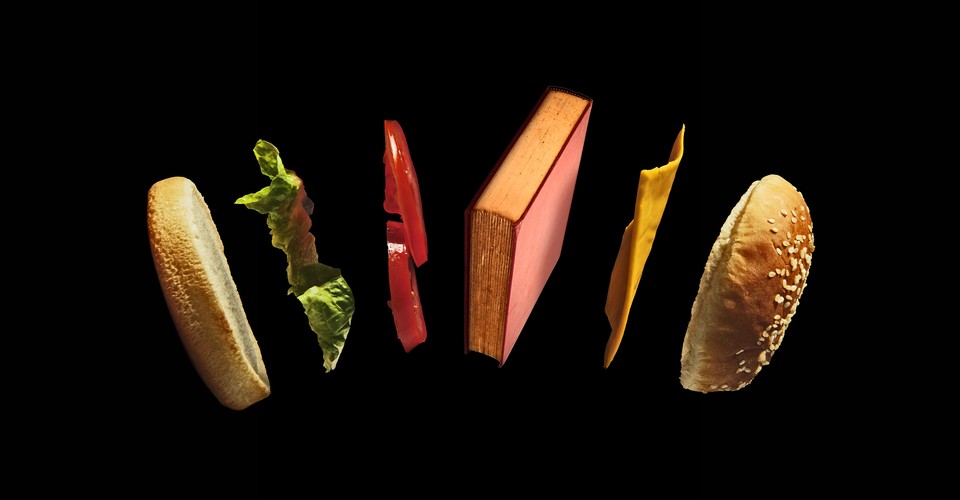 The meals in Laura Ingalls Wilder’s Little House series sounded, at times, sumptuous despite their plainness. In Farmer Boy—Laura’s fictionalized account of the childhood of her husband, Almanzo Wilder—one such dinner included “a plate of quivering head cheese, glass dishes of jams and jellies and preserves, and a tall pitcher of milk, and a steaming pan of baked beans with a crisp bit of fat pork in the crumbling brown crust.” Yet after the author Wendy McClure began cooking the meals in the series, she realized that Laura was in part trying to put a sort of positive spin on her family’s hardships: She wrote these things “about her husband after they had so many hard years together, trying to make a living off the land, and not very well sometimes.”

Writers have long used food to obscure, or reveal, truths about their subject matter, and to explore emotional connections. In her short story “Edge of the World,” Souvankham Thammavongsa opens on a 4-year-old girl watching soap operas with her mother, who’s laughing loudly, displaying an ease she has with no one else, “a half-chewed chocolate mashed up against the inside of her cheek.” During parties, she sits alone with her daughter in the kitchen, among the steaming pots and simmering pans, reminiscing about how the food in Laos just tasted better.

For other families, “the very act of eating” can “buoy the bonds between loved ones,” Mayukh Sen notes. The musician Michelle Zauner, in her memoir, Crying in H-Mart, illustrates that through late-night scavenging with her mother in the kitchen. Savoring braised black soybeans, cucumber kimchi, and yellow sprouts prepared with sesame oil and scallions not only strengthened their bond, but also Zauner’s connection to her Korean heritage. The poet José Olivarez, too, finds a way to serve up as many questions about Mexican identity as he does descriptions of ways to prepare a staple food, in his “Ode to Tortillas.”

For these writers, a plate of tortillas or a glass dish of jams and jellies points to something deeper: As Bill Buford writes in Dirt, “what happens at the table is among the most important activities in civilization. It is about intimacy, convivium, creativity, appetites, desire, euphoria, culture, and the joys of being alive.”

Food in Fiction: How Cooking Brings You Closer to the Characters
“Paradoxically, McClure says, cooking her way through the recipes Laura relied on helped her understand the deprivations Laura suffered … [and] the extent to which the Little House books are a construction.”

📚 The Wilder Life, by Wendy McClure

What Grief Tastes Like
“Food isn’t just an object; it’s a character. It reveals Zauner’s renewed awareness of the cycles of birth and death. Everything she eats is a reminder that she’s still here.”

Ode to Tortillas
“there’s infinite ways to eat a tortilla:
made in the ancient ways by hand
& warmed on a comal. made with corn
or with Taco Bell plastic. (what about flour tortillas?)”

📚 “Ode to Tortillas,” by José Olivarez

Edge of the World
“My mother’s laugh was loud and wild … She would laugh this way only when we were alone. With my father or in the company of others, she would giggle and put a hand over her mouth. I wanted everyone to see what I saw when we were alone.”

📚 “Edge of the World,” by Souvankham Thammavongsa

Books to Read If You Want to Be Transported to Another Place
“I am infatuated with genial, meandering tours through the culinary epicenters of Europe, the more immersive and intemperate the better … Bill Buford went to Lyon to work—and, more specifically, to diagram the intricacies of French cooking and discover what intangible magic chefs absorb when they train in France.”

About us: This week’s newsletter is written by Mary Stachyra Lopez. The book she’s reading next is Emily Dickinson’s Gardening Life, by Marta McDowell.