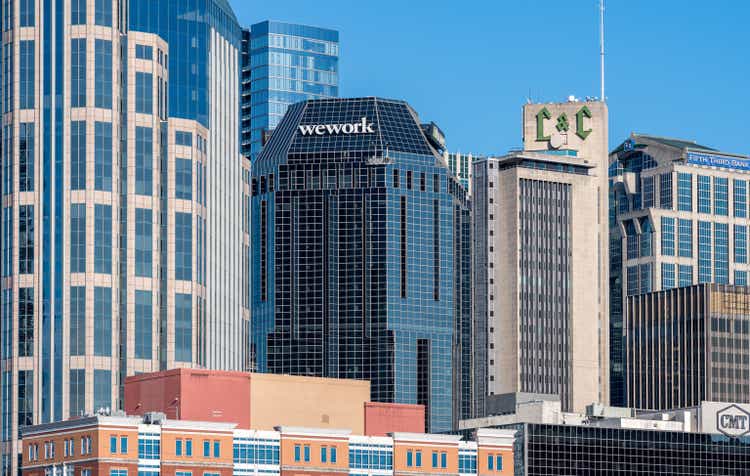 WeWork (NYSE:WE) has faced tough times during the COVID-19 pandemic, which forced and then dissuaded people from co-working spaces due to the transmission of disease and the likes. But now that the COVID-19 pandemic closures are (mostly) behind us, there has been a shift in culture which can aid in the company’s comeback.

WFH, or work from home, has become a part of corporate life in recent years and even after the pandemic, or rather especially after the pandemic, companies big and small have been adopting and offering different forms of hybrid working models to aid productivity or ease employee transitions back to the office.

But an interesting thing I expect us to see more of is that even though many people are eager to get back into an office setting with co-workers and the likes, there is still going to be a significant portion of the population which enjoys and takes advantage of that flexibility.

And with increasing time at home driving some un-easiness and employer stipends for work-from-home employees, companies like WeWork can potentially benefit from this as people seek out other workspaces.

The most obvious pro for a company like WeWork is that the shift from traditional in-office work to work-from-home has continued even after the COVID-19 pandemic. This will result, I believe, in people eventually searching for a more flexible opportunity to work from which don’t include busy and noisy coffee shops and the likes while still staying closer to home and avoiding the long and tiresome commute to work in bigger cities.

According to a survey from McKinsey, 58% of US workers said they have the opportunity to work at least 1 day from home through their jobs. While that number doesn’t mean much for WeWork, 35% of US workers reported having the ability to work from home five days a week. This number is significant.

Because while there is undoubtedly a significant portion of those workers who will simply, well, work from home, there still may be a significant boost to people searching for different office or work-from-home style options. This is due to the lower commute time, flexibility of ‘in-office’ and ‘out-of-office’ times as well as noise pollution. A lot of employees who either have families or live in environments with roommates and the likes reported to want to find another place to work from.

With some companies offering stipends for work-from-home, it can cover the roughly $300 per month cost of the WeWork membership program. This in turn should boost the company’s memberships and revenues.

It’s not just that existing companies are focusing on hybrid solutions for their employees to deal with burnout, longer and longer commute times and other factors, it’s that the current work culture for a generation which has grown up fully online is changing. Some may say for the better and some may say for the worse.

When people are now looking for new jobs, particularly young people, they look for a more flexible work schedule so they can find an appropriate work-life balance. But there’s a catch here – even though this is something which younger people care more about in a new job, they are generally feeling less productive than older colleagues who work from home due to the lower socializing aspect of work, among other things.

This means that while companies which are now hiring are focusing on hybrid work from home and in-office work, they may produce more stipends for remote work in WeWork-like places as an alternative to expensive office lease.

The Company Is Well Positioned

While the company has already-established contracts with remote workers, which are set to maintain a somewhat steady revenue stream for the longer run, they’re working on not only an advertising and marketing push but also on working towards higher margins and profits by small price increases, added amenities with higher margins and eventually cutting some costs.

The most recent quarter is a prime example – while they increased revenues from $593 million to $815 million, their SG&A (selling, general and administrative) expenses actually decreased from $899 million to $813 million. They also focused on equipping their offices and spaces with more sustainable products and services, which lowered their depreciation over the same period.

Some pricing increases and other cost cutting efforts have led the company to increase their gross margins in the most recent quarter as well. As mentioned, while the company saw their revenues increase from $593 million to $815 million, the costs of those revenues were identical at $149 million, meaning there was significant gross margin expansion.

While they enjoy the increased revenues, based on my aforementioned thesis, their focus on increasing profit margins may, I believe, result in the company reporting a profitable quarter or year sooner than expected.

Expectations Are So So. For Now…

While this growth is slowing in nature, it’s clear that the company is still growing at a high rate compared to the overall market as work from home and out-of-office work is becoming more of a norm. With the aforementioned factors, I believe that the company can outperform these figures as well.

But it’s not just about growing their sales, it’s about increasing margins to put them in a position to generate meaningful cash flows. While their long term leases are their primary costs, it’s important for them to work to minimize other expenses. According to projections, analysts are expecting them to do just that over the coming years.

Given that this rate of margin increase may be quite conservative with the company’s emphasis on cutting costs and increasing efficiency, I believe we can see the company reporting some profitable quarter in 2023 and 2024.

Right now, there are a lot of companies out there which have stopped hiring at such high rates, leading to fears of an economic slowdown. WeWork has 2 advantages here:

The first is that they have set contracts with companies that rarely reduce their workforce unless there’s a depression-level downturn, something which we’re not expecting to happen.

The second is that one way that companies have been able to cut costs is by now renewing their office leases and instead spread a portion of those savings for employee stipends. I believe that this will aid the company’s growth prospect in the near to long term.

As a result of these factors, I believe that WeWork’s long-term prospects are strong and that they will very likely outperform the broader market and economy for the 2-4 years. I am bullish on the company’s future.