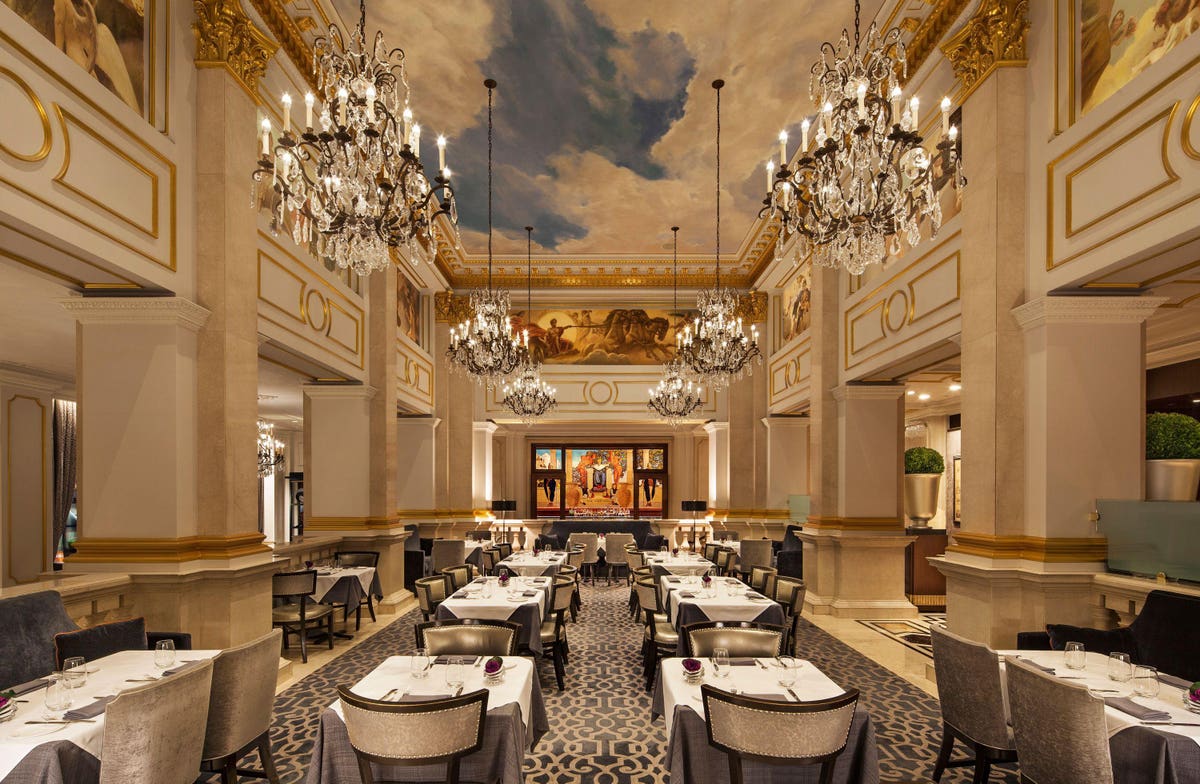 At the turn of the century, New York served as the epicenter of America’s Gilded Age. Those who have seen the period drama know that city socialite Caroline Astor hosted lavish parties at her Fifth Avenue mansion. One of her five children, Colonel John Jacob “Jack” Astor IV, went on to become one of the wealthiest men in America. He pursued the family business, including the development of grand hotels, and in so doing, left travelers 118 years later with a glimpse of a bygone era at The St. Regis New York.

The French Beaux-Arts style hotel debuted on September 4th, 1904. Some historians consider the inn for the upper crust the apogee of Astor’s career. Unfortunately, his life was cut short at 47. He died in the sinking of the RMS Titanic in 1912, though not before helping his young, pregnant wife escape on a lifeboat.

Writers often recount this story in profiles of the hotel, though I choose to mention it not because it’s a haunting detail that makes for a compelling hook, but because I only learned of Astor’s fateful journey during a recent 2-night stay in August. Of course, as a longtime New Yorker, I knew of the aristocratic heritage behind the landmark property, but putting a personality, a face, behind the details of the hotel, in every marble tile, golden handrail, and Tiffany chandelier, imbues the silk-lined walls with humanity. To wit, the St. Regis wasn’t designed in a 21st century corporate office, nor is it a hotel that could be greenlit today if it were.

The 19-story hotel, considered a high-rise when it opened, contains 238 rooms and suites. Each unit boasts the kind of pre-war details, from spacious layouts, crown moldings, to ceiling medallions, that many city denizens covet in an apartment. In all my years in Manhattan, I never nabbed such a pad, so I delighted in the opportunity to experience old New York The St. Regis way.

Of course, The St. Regis way goes far beyond elegant rooms, gilded trim, and luxe décor like plush couches upholstered in velvet textiles; The St. Regis elevates service to an art passed down between generations of management, starting with the property’s founders. When trendy boutique hotels offer touchless check-in and DIY luggage carts, The St. Regis New York’s staff don gloves, open doors, and whistle for cabs. Butlers whisk clothes off to be pressed and even unpack and pack your bags, should your modesty not stand in the way of the service.

But service goes beyond the expected for a hotel of this caliber, to the personal. When my charging cord failed, my butler surprised me with a new one. When masons tasked with pointing work on the façade sent rumbles through my room, management switched me to a different and bigger suite, and had the butler relocate my belongings then arrange them precisely as he found them.

The St. Regis New York sits among some of the city’s most beautiful buildings, a reference to the unimaginable wealth flowing through New York during its era. Located on the corner of Fifth Avenue and East 55th Street in Manhattan, the enviable location is shy of Central Park by four blocks south and Rockefeller Center by five blocks north. Several subways, including the E, 6, N, and W, shuttle you downtown, uptown, and east to Queens in a flash.

Points of interest nearby include Broadway and its theaters, the Museum of Modern Art and its Michelin-starred restaurant The Modern, plus Fifth Avenue’s iconic shops and department stores.

The hotel may not be amenities rich, but what it offers, it does in style. The iconic King Cole Bar serves classic cocktails alongside its signature Red Snapper, a more refined name for the ubiquitous brunch cocktail known as the Bloody Mary. In fact, the drink was created in the bar in 1934 by bartender Fernand Petiot. Martinis, while pricey, come as big as a rain barrel. On our first night, my husband and I grabbed a dark nook in the corner, gazed at the singular artistic style of the Maxfield Parrish mural, and snacked on lobster rolls, burgers, and perfectly crisp, salty fries to complement the boozy drinks. For a midtown destination, the room rollicked with tourists, canoodlers, and wheeler-dealers until last call at 10:30 PM.

Since I had the luxury of time the next morning, I took breakfast beneath the vaulted ceiling in Astor Court. While reading the NY Times and WSJ in print with a cup of coffee, a plate of fluffy eggs and thick cut bacon arrived. Hotel breakfasts are notoriously expensive, and the St. Regis is no different, but the execution of the food and elegant setting made the languorous experience worth it, at least once.

The hotel does offer a gym, but I never made it. Rather, I booked a private Champagne sabrage masterclass in the Cognac Room. This new experience offered at several St. Regis properties teaches guests the art of sabering a bottle of chilled Champagne with a sword or sabre. The legend goes the technique of opening bottles of bubbles with a weapon was used by Napoleon and his troops, whether in victory or defeat.

The hotel chef, an affable character hailing from the Campanian Coast near Amalfi, came out to describe the various plates of cheese, charcuterie, and canapes, some topped in caviar, that accompanied the Veuve Clicquot my husband had just popped open.

After meeting Chef, we decided to have our final meal in the city at Astor Court after checking out. While the staff packed our car with our bags, we sat down for a leisurely lunch. Like American royalty, we had the room, still quite at noon, to ourselves. We started with fresh and light tuna tartare to contrast with a savory French onion soup, then dug into a hearty Bolognese rigatoni and a petite filet mignon paired to a glass of Barolo, for the passenger of course. Classic dishes for a classic setting.

The St. Regis New York does not cater to travelers looking for trendy and modern or value, though you can book rooms with Marriott points. Wealthy and business clientele, honeymooners, special occasion travelers, and those seeking a taste of the Gilded Age, are the target audience for the property.

However, as with many grand hotels, there are subtle signs of faded splendor, carpeting in need of updating or timeworn furniture showing the nicks and scrapes of age. However, refreshes require shutting down rooms and common areas, and in a hotel this small coming out of a pandemic, I’ll assume these concerns will eventually be addressed.

I’d only make one more plea, not just to the St. Regis New York, but to all hotels, especially leaders in the luxury travel space: travelers are increasingly eco-conscious. Many, myself included, want to see a reduction in single-use plastics like water bottles and toiletries, and legacy brands looking to build the next generation of clientele would be wise to do so.

Fortunately, the cookies and brownies we carried to go came in a biodegradable clamshell. The container went straight into our compost after the last bite of chocolate chip.