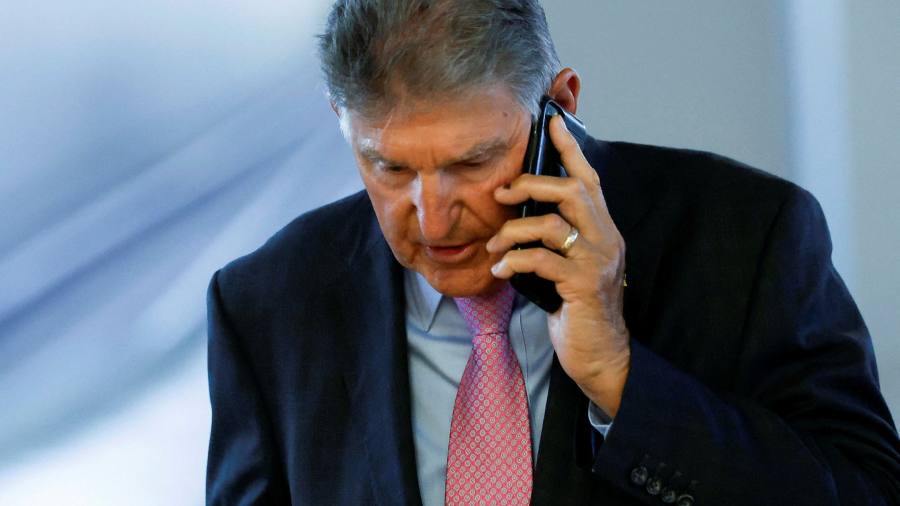 This article is an on-site version of our Energy Source newsletter. Sign up here to get the newsletter sent straight to your inbox every Tuesday and Thursday

Welcome back to Energy Source.

Oil markets will be watching Opec+ this week as the group of producers convenes again on Wednesday. It will be the first meeting since US president Joe Biden’s visit to Riyadh and Saudi crown prince Mohammed bin Salman’s swing through Europe last week, where he was lobbied by EU leaders to help bring down energy prices.

Crude prices continue to bounce around $100 a barrel — any move to raise output could put renewed downward pressure on prices.

On to today’s newsletter, where we look at the big new energy and climate legislation that has returned from the dead in Washington and data on which celebrities’ private jets are creating the most carbon pollution.

Thanks as always for reading! — Justin

Five takeaways from the big climate and energy bill

Build Back Better is dead; Long live the Inflation Reduction Act! In an incredible turnround in Washington, major climate and energy legislation is suddenly at the top of the agenda again. West Virginia senator Joe Manchin struck a deal with the White House and Senate leader Chuck Schumer on wide-ranging legislation that includes $369bn in climate and energy spending. Passage is by no means certain, but the prospects for the bill look as promising as they can.

Here are some of the ways we see the legislation rippling through American energy in the coming years:

The “will they, won’t they” drama surrounding the Inflation Reduction Act, an offshoot of the Build Back Better negotiations, has whipsawed the nation’s renewable power industry more than any sector. But now a big victory looks to be in reach.

Conrad Schneider, advocacy director at the Clean Air Task Force, an environmental group, believes the bill would “unlock a historic investment in US climate action and clean energy” and put the Biden administration’s climate targets within reach.

Some of the nuts and bolts: the solar and wind tax incentives that have been so critical to accelerating renewable power development in the US would be extended for a decade. That is huge for the industry. Up until now, the tax credits had to be renewed every year or two — usually tucked away in unrelated bills, buffeted by the whims of Congress — which made long-term planning devilishly difficult.

Extending the tax incentives would give utilities a much longer runway to plan their green transition — a big win for long-term decarbonisation plans.

The bill would also make the credits “direct pay”. It’s a bit of arcane jargon, but it has been near the top of the renewable industry’s wish list for years. It means companies will get payment for the credits directly from the government rather than relying on tricky financing arrangements.

Additionally, the tax credits would be available for new technologies including utility-scale batteries, which are badly needed as renewable energy claims a bigger share of the grid. Nuclear power also gets financial support in the bill.

On the corporate front, big clean energy groups have seen their shares jump on the revival of the climate legislation and analysts expect the trend upwards to continue as the bill moves towards passage. The iShares Global Clean Energy ETF is about 15 per cent higher since the agreement was announced.

The legislation would also help to electrify America’s motorways, as it would extend the federal tax credit of $7,500 for the purchase of an electric vehicle. There are, however, new income limits on being able to claim the credit — a response to criticism that the tax benefit largely serves rich people buying pricey electric vehicles.

It could combat EV sticker shock too. The credit is limited to cars that retail for $55,000 or less. That rises to $80,000 or less for pick-up trucks like the Ford F-150 Lightning and other larger vehicles. That could help push manufacturers to start putting those new lower-cost EV models they’ve been promising on to the road.

Anyone who has recently bought, or like me, window-shopped for EVs, has seen that most models remain very pricey. There is also a new credit of as much as $4,000 for buying a used EV, which will be a growing market in the years ahead.

3. New opportunities for the oil and gas sector — while demand still exists

The oil and gas industry has lobbied Manchin hard over the past two years to ensure they had a voice in the energy and climate negotiations. That is evident in the bill.

There is also a novel provision in the legislation that would require the government to offer fossil fuel development opportunities on federal lands wherever renewable energy development is promoted.

The oil and gas industry also notched some wins for technologies where they see an advantage in the energy transition. ExxonMobil and Chevron have put carbon capture and storage, hydrogen, and biofuels at the heart of their low-carbon businesses. All of them get new and bigger incentives.

For instance, the tax credit for new carbon capture and storage projects will rise from a maximum of $50 per tonne of CO₂ buried in the ground to $85 a tonne, which could help make more CCS projects profitable.

However, a fee on emissions of methane — a highly potent greenhouse gas — was a surprising inclusion in the bill. Companies that comply with minimum methane emission regulations would be exempt, but it could cost dirtier oil and gas producers dearly. And bigger picture, this is a bill that would accelerate the greening of America’s economy and could ultimately start reducing demand for fossil fuels faster than thought.

One of Biden’s favourite quips is that when “he hears climate he hears jobs”. The idea that the US can have a “Made in America” energy transition that creates jobs and wrests away China’s dominance in clean energy supply chains has been critical to the president’s climate pitch. Those are themes that run throughout the bill. Domestic solar and other clean tech manufacturing is subsidised.

Everything from wind and solar developers to CCS projects will have to pay workers so-called prevailing wages to access tax credits, potentially carving out a larger role for unions. Electric vehicles will have to be assembled in North America and the lithium, copper and other critical minerals used in the cars extracted from mines in America or friendly countries that have free trade agreements with the US.

This could go a long way towards rewiring global clean energy supply chains. It could also raise the ire of clean energy companies that will have to navigate, and pay for, the complex rules.

5. Can the US reform a broken permitting process?

The biggest wild card surrounding the legislation is reform of America’s broken system of permitting new energy projects. Manchin has said that there is an agreement to overhaul the system, but it does not appear to be part of the Inflation Reduction Act itself — leaving much unclear.

Still, the fact that Manchin claims an overhaul will happen eventually has been billed as a win for fossil fuel interests. That is partly true. Manchin clearly wants to make it easier for new gas pipelines (especially out of West Virginia), liquefied natural gas export plants, and other oil and gas facilities to be built.

But the same system that has tied up fossil fuel projects has also ensnared plenty of clean energy developments, and there is wide support for making it easier and faster to build big new energy projects. (Justin Jacobs)

More celebrities are coming under fire for their use of private jets. A report by marketing agency Yard found that Taylor Swift, Floyd Mayweather, and Jay-Z were among the worst celebrity polluters when it came to private jet use.

Swift, who topped the list of celebrities, emitted nearly 8,300 tonnes of CO₂ equivalent from private flights this year, according to the report. That’s more than 1,000 times the average person’s annual emissions.

A spokesperson for Swift told Rolling Stone that attributing these trips to her were inaccurate since her jet was loaned out regularly to individuals.

While few can afford to fly on private plans, Yard’s report shows once again how actions taken by the wealthy minority disproportionately effect the environment. The criticism towards celebrities comes at a time when the world scorches under record temperatures brought about by climate change.

Private jet use soared since the coronavirus pandemic, as wealthy individuals sought to escape Covid-19 restrictions and subsequently the inconveniences of flight cancellations and staffing shortages.

“The commercial airline and airport industry is facing shortages of staff and have various challenges to overcome which is continuing to drive new customer growth and passengers to Jettly,” said Justin Crabbe, chief executive of Jettly, a private jet booking app. Despite rising fuel costs, monthly flight bookings on the platform are roughly double their levels in 2019.

In 2021 there were 3.3mn recorded private flights, the most of any year on record, according to aviation industry market research company WingX. While there are signs demand for private jets is beginning to peak, July demand for private jets is still up 13 per cent from pre-pandemic levels. Meanwhile, commercial airlines have struggled to recover, sitting 22 per cent behind pre-pandemic demand. (Amanda Chu)

Energy Source is a twice-weekly energy newsletter from the Financial Times. It is written and edited by Derek Brower, Myles McCormick, Justin Jacobs, Amanda Chu and Emily Goldberg.

The Climate Graphic: Explained — Understanding the most important climate data of the week. Sign up here