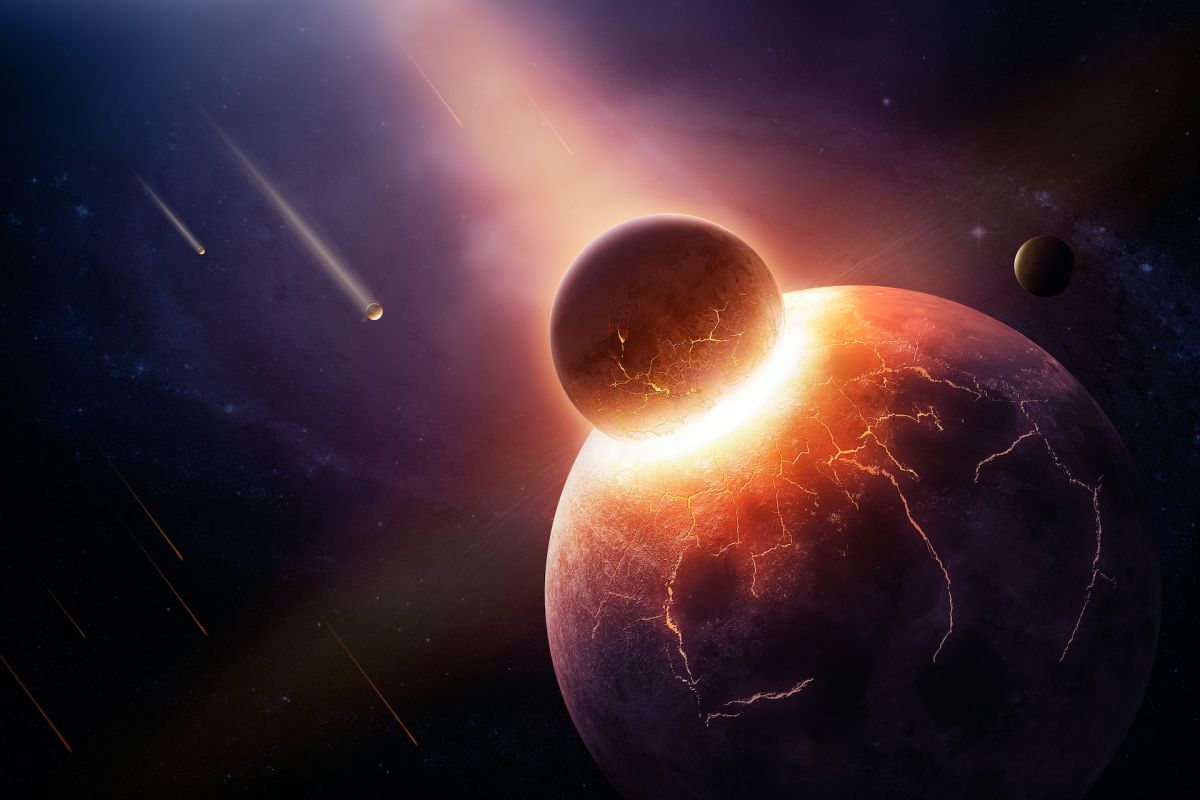 From early asteroid bombardment to the development of nuclear weapons, some massive detonations have battered our planet. But Earth‘s biggest explosion varies by the scale you’re considering, from human-created to blasts from giant space rocks.

Among the largest human-caused explosions on record, a Soviet superweapon called Tsar Bomba tops the list. Meanwhile, the biggest explosion with a terrestrial origin came from the climate-altering Toba supervolcano more than 70,000 years ago. As for the biggest blast from an extraterrestrial source that left clear evidence, an asteroid heftier than the one that killed the dinosaurs carved the enormous Vredefort crater 2 billion years ago.

That is, unless you count the moon as evidence: A collision with a planet-size impactor 4.5 billion years ago likely created Earth’s satellite, releasing enough energy to dwarf anything the planet has seen since.

Minor Threat, an intentional blast in 1985, packed the most power of any nonnuclear explosion in history, Sam Rigby (opens in new tab), an associate professor at the Blast and Impact Engineering Research Group at the University of Sheffield in the U.K., told Live Science. A U.S. military operation designed to observe the outcomes of nuclear-scale blasts, Minor Threat used 4,700 tons of ammonium nitrate and fuel oil to produce a 4.7-kiloton TNT explosion. That’s nearly one-third the force of Little Boy, the atom bomb that devastated Hiroshima in World War II with a 15-kiloton blast.

While Minor Scale approaches the size of early atomic bombs, more advanced nuclear weapons made even that tremendous blast look tiny. In 1961, the Soviet Union dropped a gigantic thermonuclear bomb over the deserted Novaya Zemlya islands north of Russia. Called “Tsar Bomba,” it exploded with the force of 50 to 60 megatons of TNT, making it the largest nuclear explosion ever unleashed, George William Herbert, an adjunct professor at the James Martin Center for Nonproliferation Studies in California, told Live Science.

It detonated with more than 3,300 times the power of Little Boy, and “the fireball … was wider than the area of the damage that was done in Hiroshima,” Herbert said. The bomb’s energy yield would have caused “nearly 6 and a half kilometers [4 miles] from ground zero of complete destruction,” Rigby said — or nearly double that estimate when accounting for explosion duration.

The bomb’s original design would have been even more powerful, reaching 100 megatons of TNT, but military planners reduced the explosive yield so the bomber could fly away safely, Herbert said.

Earth itself has unleashed megaton-plus explosions for eons. The largest volcanic eruption in recorded history struck what is now Indonesia in 1815, when Mount Tambora blew off its 13,000-foot (4,000 meters) peak, according to NASA’s Earth Observatory (opens in new tab). By measure of thermal energy, Tambora detonated with the equivalent of 800 megatons of TNT (more than 14 times Tsar Bomba’s yield), Shanaka de Silva (opens in new tab), an Oregon State University volcanologist, told Live Science.

The sound of this epic blast resonated as far away as Sumatra, 1,615 miles (2,600 km) distant, according to the Geological Society of London (opens in new tab). Material Tambora spewed into the atmosphere blocked enough sunlight to produce global cooling, creating the “Year Without a Summer” in 1816, according to NASA. That summer, “snow fell in New England,” and “gloomy, cold rains fell throughout Europe,” according to the University Corporation for Atmospheric Research (opens in new tab). The eruption was likely “responsible for several years of colder winters and cold summers in Europe and famine around the world,” de Silva said.

The Tambora blast was a 7 on the volcanic explosivity index (VEI), a logarithmic scale like the Richter scale (so each unit increase means 10 times the explosive power). January 2022’s Hunga Tonga-Hunga Ha’apai eruption created the most powerful pressure wave ever measured in Earth’s atmosphere, according to a 2022 study in the journal Science (opens in new tab). But in comparison, that eruption ranks just VEI 5 or 6, de Silva said.

Related: What are the largest impact craters on Earth?

However, prehistory bears evidence of eruptions “another order of magnitude greater than Tambora,” de Silva said. These so-called supereruptions reached VEI 8, detonating with the force of 10,000 megatons of TNT. That’s 200 Tsar Bombas, or more than 660,000 Hiroshima bombs. Scientists have also found evidence of at least three VEI 9 eruptions, the largest being the Youngest Toba Tuff eruption 74,000 years ago, in what is now Indonesia. Toba’s TNT equivalent reached hundreds of thousands to billions of megatons of TNT, de Silva said.

Toba may have been so powerful that its seismic effects triggered another VEI 9 supervolcano eruption on the opposite side of the globe, in what is now Guatemala, according to a 2022 study in the journal Frontiers in Earth Science (opens in new tab) co-authored by de Silva.

De Silva cautioned that these massive volcanoes represent only those that left behind definitive evidence. Other similar, or even larger, eruptions likely occurred, particularly in Earth’s early history.

The largest explosion from an extraterrestrial source in recorded history occurred over Siberia in 1908: the Tunguska event. Scientists think a meteor exploded in the air, unleashing a 10- to 30-megaton (opens in new tab) explosion. The blast flattened more than 80 million trees, and people 300 miles (500 km) away “reported ‘deafening bangs,'” according to the Planetary Science Institute (opens in new tab).

Prehistory preserves evidence of far more devastating events, however, including the enormous Vredefort structure in South Africa, Earth’s largest impact crater. Only the 99-mile (159 km) center of the crater from the 2 billion-year-old impact remains, however, and prevailing estimates place the original feature at around 155 miles (250 km) in diameter, Miki Nakajima (opens in new tab), a planetary scientist at the University of Rochester in New York, told Live Science. That makes Vredefort crater the biggest extraterrestrial impact that left clear evidence on Earth.

That size also translates to an impactor about quarter bigger than one at Chicxulub in Mexico, which caused the nonavian dinosaurs‘ extinction 66 million years ago, Sean Gulick (opens in new tab), a geoscience research professor at the University of Texas at Austin, told Live Science. The Chicxulub impact unleashed the force of about 8.5 billion to 10 billion Hiroshima bombs; the Vredefort impactor would have had roughly twice that yield, he said.

Other estimates ascribe even greater power to Vredefort. In 2022, Nakajima and co-researchers revised the asteroid’s estimated diameter and velocity upward, calculating that the space rock slammed Earth with 660 teratons — or 660 with 12 zeroes — of TNT. That comes to 44 billion Hiroshima bombs or 13.2 million Tsar Bombas.

On the heels of this massive impact, the Earth suffered tremendous cataclysms, likely including a huge tsunami, short-term global cooling as dust and aerosols filled the atmosphere, and long-term global warming as ejected carbon dioxide and water caused a greenhouse effect, Nakajima said. These climatic effects likely caused mass extinction among the period’s photosynthetic microbes.

Finally, the moon is evidence of the hugest release of explosive energy in Earth’s history with a physical record. According to the leading theory (opens in new tab) of our natural satellite’s formation, a Mars-size body crashed into the young Earth, spewing material into orbit. Such a collision, Nakajima said, works out to about 5.1 zettatons of TNT — 340 quadrillion Hiroshima bombs or 100 trillion Tsar Bombas.

That apocalyptic event “would have completely melted the whole mantle,” Nakajima said, leaving behind no geological signals of its own or previous impacts. So, while scientists can’t rule out bigger impacts before that, geochemical signals show that no explosions since have approached that size, Nakajima said.