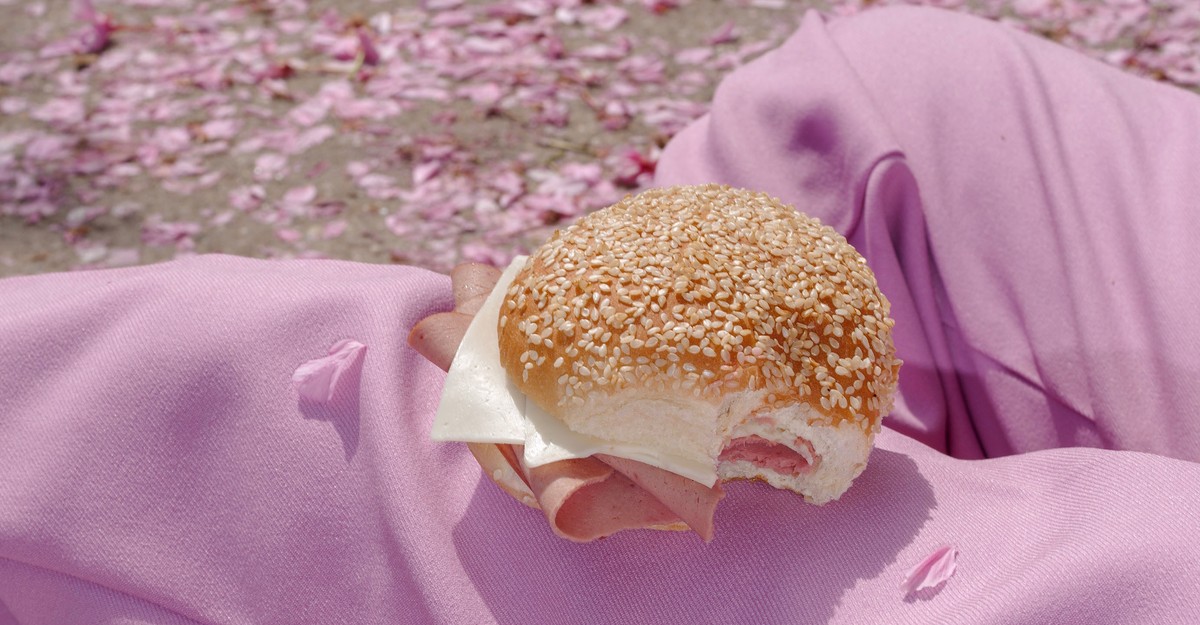 “No food is sadder than personal pizza” is something I once read and promptly disagreed with.

There are hundreds of objectively sadder foods. An unsold pie in a deli case, for example, is a celebratory food that should be shared at a bustling table but is now wasting away in isolation. There is the sadness of an unattended lemonade stand or of free samples when no one takes any. An untouched tray full of mini quiches offered by a cheerful employee beckoning “Would you like to try some quiche today?” to uninterested shoppers is so much sadder than a personal pizza.

There are sad foods from personal memories: the frozen dinner my newly divorced dad heated up in the dirty microwave in the sloppy transitional apartment that he shared with a roommate. The chocolate my mom bought me as a treat to comfort myself when she was away on business. When a date got up and left in the middle of our dinner, throwing down insufficient cash with an insufficient “I’m not feeling this—take care,” my plate of pasta was extremely sad; it became only sadder when the waitress asked me if I wanted it packaged up to go. I did.

You see, Sad Food is not the same as Solitude Food. Solitude Food celebrates the luxury of being intentionally alone. It’s often found on room-service menus when you’re spread out on the oversize bed of a chain hotel and contemplating whether to send for the burger or the salmon on your company’s credit card as you flip through cable channels and settle on an ’80s movie. A coffee shop offers a wealth of Solitude Food: a croissant balancing at the edge of a table, making room for a book and a large coffee saucer, especially if that pastry has been ordered as “the usual.” And few Solitude Foods are better than a bucket of popcorn to oneself in the back of a movie theater on a rainy weekday afternoon of playing hooky.

A personal pizza can be Solitude Food too. I buy a personal pizza when I’m anticipating a glorious night entirely to myself: feet up on the coffee table, sparkling water I drink straight from the bottle, some totally uncool wine (like a merlot from the Dave Matthews winery), and a show I’ve seen a hundred times. Just me, melted cheese, and the Thanksgiving episode of Gilmore Girls. That’s divine solitude.

Read: Why do we look down on lonely people?

But as we’ve all experienced, Solitude Food can become a Lonely Food—and that’s when it turns sad. Solitude is slippery and can morph into loneliness with an accidental listen to a particularly evocative song on shuffle, or when the place you’ve chosen to eat isn’t as charming as you anticipated, or when something goes awry in your pursuit of Solitude Food and it goes from an indulgence to a burdensome ritual.

I’m thinking of a fellow barista at the coffee shop where I used to work, an enthusiastic home cook named Sarah who told me of her harrowing attempt to splurge on a magnificent pasta feast for herself one day. Anticipating a delightful cooking adventure to soothe a recent heartbreak, she braved Whole Foods at evening rush hour, where a concatenation of disasters ensued: Sarah spilled pine nuts all over the bulk aisle to the horror of a grumpy employee; she ordered the wrong meat and felt too sheepish to rectify it; her credit card didn’t work at checkout, and a manager had to get involved so she could write a check for her bounty. “So how many people are you cooking for tonight?” the cashier asked to defuse her agony as a long line of impatient people behind her glared. “Oh, just one,” she responded, and her Solitude Food instantly turned into Lonely Food.

I’m thinking of the rare moments when I’ve felt lonely while traveling solo, like after I took myself out for a self-congratulatory dinner following the delivery of my TED talk in Athens and was ushered to a back table to make room for the couples and groups of friends in the front. Mid-spanakopita, I looked around and realized that nobody at the restaurant could possibly infer why I’d ordered a coupe of champagne, nor would they care to. I sipped it unceremoniously, wishing I knew anybody in the whole city who could toast with me. A solo glass of bubbly to fete an accomplishment is a hopelessly sad beverage.

Living alone in New York provides a nonstop emotional dance between the splendor of solitude and the affliction of loneliness, which alternate during any given subway ride or studio-apartment dinner. I suppose it has to do with another New York dance—of feeling extremely significant or extremely insignificant, depending on the weather, my mood, a recent interaction with a stranger, or how capable I feel carrying my groceries up the stairs alone. I can be solitary and lonely in the span of an hour, and therefore my meals also bounce capriciously between the two states.

Read: The people who eat the same meal every day

Take lemon risotto, which I’ve made a million times since I moved to New York. When I made it the first time, it was Sad Food: Two dinner plans fell through, and cooking risotto alone in my studio gave me the distinct feeling that everyone else in the city was out, in love, and throwing their head back in laughter with fashionable and adoring friends. I ended up making too much of the recipe, and the excess enhanced my melancholy: There was no one to share it with. I went to bed early, risotto rice splashed on my kitchen walls.

Now that I’ve mastered the portions, though, it’s my go-to Solitude Food for a night when the only company I crave is a podcast and my oven light. It’s for the type of evening when I come home, set my bags down on the floor, and my apartment feels like a kingdom devoted to my desires. Everything on my walls is exactly at my eye level, the couch has molded to my shape, my cat knows only my voice, and my kitchen is arranged as I would have it. The queen has returned; now the party begins. I take out my white wine and my rice and my Parmesan, and I create a royal banquet for one.

If I make lemon risotto too often, it risks becoming a Sad Food once again—just as a personal pizza Monday through Friday would be a tragedy, not an indulgence. Solo risotto every night of the week, as luxurious as it sounds, would signal a lonesome rut, not treasured alone time. So I make it when I’m consciously forgoing plans in pursuit of a stupendous evening in slippers. There’s nothing sad about a meal all to oneself if it’s being enjoyed.

This article is adapted from My First Popsicle: An Anthology of Food and Feelings, edited by Zosia Mamet.