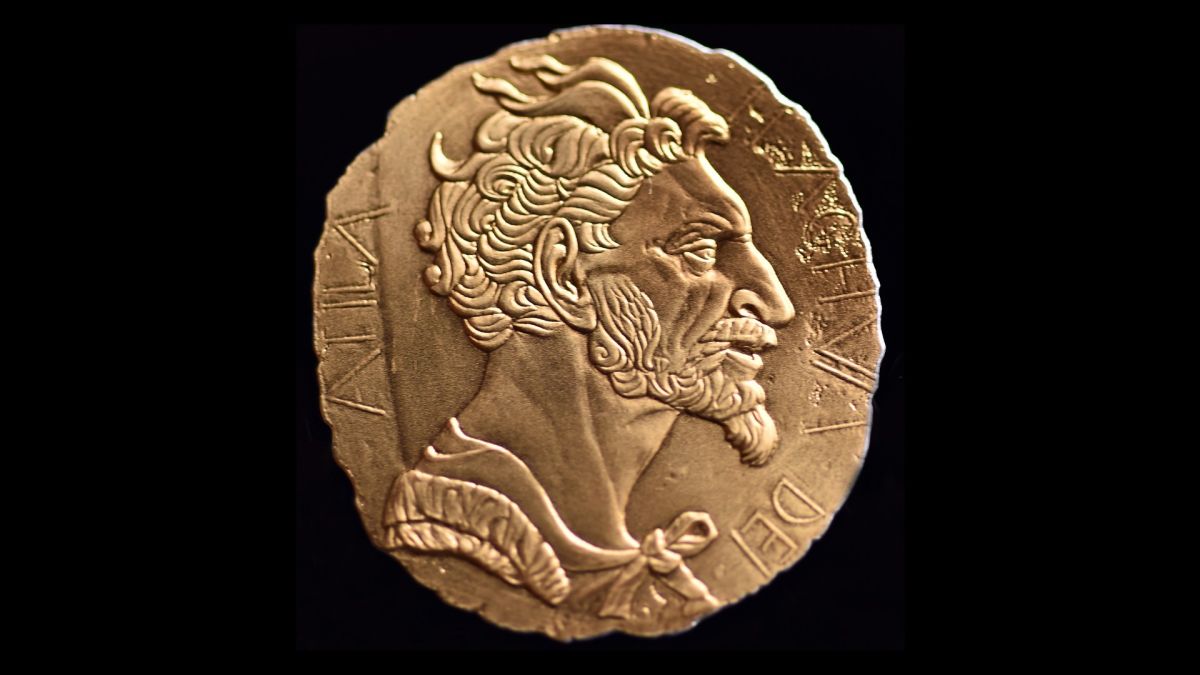 Attila the Hun, who invaded and ravaged both the western and eastern halves of the Roman Empire during the fifth century A.D., died on his wedding night at age 58. It’s a matter of debate whether Attila died of natural causes, or whether his new wife, Ildico, murdered him. But despite his murky ending, does anyone know where he was buried?

Attila was leader of the Huns, a non-Christian people who lived on the Great Hungarian Plain and who eventually took over a large swath of Central Europe. Attila was sometimes referred to as “Flagellum Dei” in Latin, which is often translated as “scourge of God” but can also be called “whip of God.” He threatened, but didn’t actually sack Rome and Constantinople. And Attila forced emperors to pay him vast amounts of gold in exchange for peace agreements that often did not last long.

Related: Why did Rome fall?

“There is only one [surviving] written source about Attila’s funeral” Zsófia Masek a post-doctoral researcher of archaeology at the Hungarian Academy of Sciences, told Live Science in an email.

That source is the sixth-century ancient writer Jordanes, who wrote in his book “Getica (opens in new tab)” that Attila was buried in a triple coffin. The innermost was made of gold, the second made of silver and the outermost made of iron. The gold and silver signified the wealth that Attila had gained for the Huns, while the iron signified the Huns’ military might, Jordanes wrote.

The servants who helped build the tomb were killed in an attempt to keep its location secret, Jordanes wrote, claiming that he got his information from records written by Priscus, a Roman diplomat who had contact with Attila and others from his court. Attila was also buried with gems, captured enemy weapons and ornaments and the servants were killed so that these “great riches” may “be kept from human curiosity,” Jordanes wrote.

Where is his tomb?

Scholars that Live Science talked to are not certain where the tomb is or whether any of it may still be intact.

His tomb may be located somewhere on the Hungarian Puszta (also known as the Great Hungarian Plain), László Veszprémy, a history professor at Pázmány Péter Catholic University in Budapest, Hungary, told Live Science in an email. Attila made his headquarters somewhere on the plain and his tomb is likely not far from it, Veszprémy said, noting that it may be “next to a river or even in [a] riverbed.” The tomb “may survive, if [it wasn’t] emptied during the earlier centuries,” Veszprémy said.

Historians have been interested in finding the tomb for some time. “People were interested in it at least from the 13th century on, but mostly located it next to Roman ruins,” Veszprémy noted.

Other scholars also believed that the tomb is likely located somewhere on this plain. “I believe that his final resting place could lay in the Great Hungarian Plain. There are no serious doubts against this hypothesis,” Masek said. “Of course, it is possible that it is located in the Serbian or Romanian parts of the Plain region,” which the Huns also operated in.

It’s uncertain whether anything remains of Attila’s tomb or whether it will ever be found. “Perhaps one day somebody will stumble upon his grave, but I wouldn’t hold my breath,” Michael Maas, a history professor at Rice University in Houston, Texas, told Live Science in an email.

Another scholar was more optimistic. “No doubt the tomb will be found someday… It may well be found to have been robbed in antiquity,” Ralph Mathisen, professor of history, classics and medieval studies at University of Illinois Urbana-Champaign, told Live Science in an email.

There is a possibility that the tomb could have already been found, but not identified with Attila, said Valéria Kulcsár, an associate professor of archaeology at the University of Szeged in Hungary. For instance, a large hoard of gold artifacts found at Nagyszéksós, Hungary dates to around the time the Huns flourished, but does not have any human remains and it is not clear who they were buried for, if anyone.

One question a scholar raised is whether the tomb of Attila should be found. “Personally I prefer it to be a mystery than an archaeological find waiting to be analysed,” Masek said.