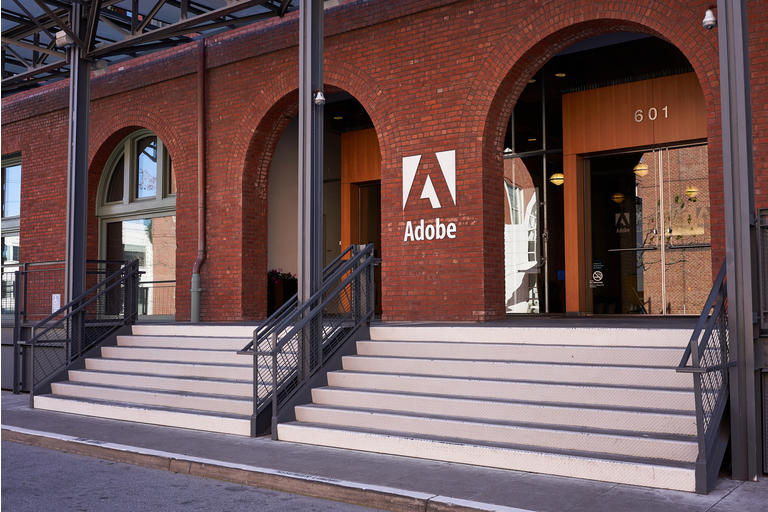 Adobe (NASDAQ:ADBE) is arguably the highest quality software company in the world considering its 37% operating margins, consistently double digit growth rate, decades-long history of success, iconic products like Photoshop and Acrobat, diversified revenue, and shareholder friendly policies. Although many peoples’ knee-jerk reaction to a 50 P/E stock in this market is to run for the hills, Adobe is cheaper than peers Microsoft (NASDAQ:MSFT) and Apple (NADSAQ:AAPL) on a historical basis and cheaper than Microsoft on a P/FCF basis despite having the highest EPS growth forecast of the group over the next two years.

Adobe is one of the largest and most diversified software companies in the world. They make well-known products like Photoshop and Acrobat (they own the PDF file format), but also many less well-known products which are often business-facing. Adobe is a competitor to a variety of popular companies including Microsoft, Shopify (NYSE:SHOP), DocuSign (NASDAQ:DOCU), Salesforce (NASDAQ:CRM), and The Trade Desk (NASDAQ:TTD).

As shown in the graphic above, analyst firms like Gartner consider Adobe a leader in an astounding 33 categories. This could be somewhat misleading, since Adobe chose the categories to show. For example, while it’s not shown, it’s a bit concerning that they’re not even listed as a competitor to DocuSign in Contract Lifecycle Management. Yet they (correctly) note that they’re a leader in e-signature software, which is a very similar field.

Even so, most companies are happy to claim leadership in a single magic quadrant. 33 quadrants might be a record, although Microsoft has a similar number. I’ve not seen any other company that’s a leader in more than 10 quadrants although it’s certainly possible that there are others. This widespread leadership speaks to Adobe’s quality, diversification, and vision/execution.

Adobe has a moat based primarily on brand value, which some might describe as network effects. In particular, many of its products like Photoshop are industry standards with steep learning curves. People are likely to learn these industry standard products in school or on the job, and will be reluctant to interrupt their learned workflow to switch to a competitor, even if that competitor is cheaper. This gives Adobe premium pricing power on many of its products. This moat applies unevenly across the company since only some of Adobe’s products are industry standards.

Because Adobe is so diversified, it can be difficult to understand their growth drivers. Even the graphic above is more complex than what you’d typically see from a newer SaaS startup.

Broadly, I consider them a play on the creator economy and SMB digitization. Many of their offerings appeal to SMBs, consumers, and creatives in addition to larger businesses, which is a trait they share with Microsoft and Apple. On the other hand, many newer SaaS companies appeal primarily to large customers.

When buying Adobe, you’re buying a company that has a long track record of creating new market-leading products in the creative economy and more traditional workplaces. And you’re betting that they’ll be able to continue doing that in the future, even if you can’t point to a specific product that will drive most of the growth going forward.

The above table is my “scorecard” that I use when evaluating SaaS companies from a quantitative perspective. Adobe is elite in every metric except for its revenue relative to its estimated addressable market. I score this from the perspective of a high growth company, so I typically want this to be below 1%. However, from the perspective of a stable blue chip company like Adobe, you’d actually want this number to be higher since it indicates market leadership (at the cost of growth opportunities).

It’s also important to note that Adobe doesn’t give an explicit number for its net retention rate, which typical for a company of its size and diversification. The 125% is per my own computation and is specific to the Experience Cloud, since that was the only segment I could find usable numbers for. It’s very likely that Adobe’s overall retention rate is actually a more average number around 110-115% based on its historic growth rate and new customer acquisitions.

With the negatives out of the way, let’s take a look at some of the positives:

As shown above, Adobe has posted an average EPS beat of 24% over the past three years. Unlike many SaaS companies, they’re highly profitable despite growing at a respectable rate, a combination that consistently gives them one of the highest Rule of 40 scores in the SaaS universe.

While it’s not shown in the chart above, they accomplish this while returning cash to shareholders through buybacks. They’ve decreased shares outstanding by about 1.5% per year over the last decade, which one could use as a proxy for a dividend yield.

All told, Adobe’s qualitative quality is backed up by quantitative metrics.

Adobe’s guidance for 2022 wasn’t particularly exciting: just 13% revenue growth and 2% EPS growth. This would be their lowest level of revenue growth since 2015. This guidance also missed analyst estimates by 4% on EPS and 1% on revenue, which doesn’t sound like much but analysts are generally conservative. They also narrowly missed on billings (-1.6%) in the most recent quarter which probably added to investor jitters.

However, look at the reasons they give for this guidance:

First, a strengthening dollar. This isn’t guaranteed, and it isn’t a fundamental problem for the business. I view over half of their revenue being international as being a net positive for their long-term growth trajectory even if it can cause some short-term volatility.

Same story for operating expenses. I’m fine with some hiring in anticipation of future growth and that’s what most SaaS companies do, even if it makes margins worse in the short term.

Third – and probably the most ridiculous – is the number of weeks in the fiscal year. With one less week in FY2022, there will technically be more difficult comps. Again, this has no practical impact on the underlying business in the long term.

Finally, the fourth issue is an increase in their tax rate. While such a change would certainly be negative, it will likely have an impact on other companies like Microsoft and Apple, not just Adobe. And like the other three considerations, it’s “just” a financial issue, not an issue that trickles down to their actual customers or market position.

If we ignored all of these factors, we’d probably be looking at a forecast closer to 16% revenue growth and ~8% EPS growth. This is much closer to guidance over the last few years, which Adobe typically beats.

While I believe that these aren’t real long-term risks and that the selloff is overdone, it’s still possible that Adobe’s growth will slow going forward. Since 2008, Adobe has growth EPS at a 17% CAGR. But much of that growth was driven by a successful transition to the cloud. With 92% of Adobe’s revenue now recurring, that transition is mostly complete. It remains to be seen whether Adobe can continue to grow earnings at a rapid rate without that tailwind, and it’s concerning that they guide for slower EPS growth than revenue growth when the historic trend was the other way around.

Slowing growth – whether that’s from competition, unexpected fluctuations in demand, or some external factor – is the main risk facing Adobe since their valuation correctly assumes continued double digit growth in the coming years. Aside from the growth-dependent valuation (which isn’t unreasonable by historical standards), this is a wide moat company with strong market position. Unlike its larger peers, it doesn’t face noteworthy regulatory risk.

Compared To Microsoft And Apple

This is how Adobe’s growth projections compare to its peers’ over the next two years:

Even with some headwinds, Adobe is still projected to grow faster than Microsoft and Apple. This is no surprise; Adobe outperformed these larger companies over the last 10 years and also outperformed Microsoft over the last 30 years. That’s a long precedent for success and with many digitization trends that fueled that success still going strong, I think it’s more likely than not that Adobe continues to outperform the market going forward, even if there are some bumps in the road.

Also, look at Adobe’s valuation relative to these peers based on price to free cash flow:

On a historical basis, Adobe’s P/FCF multiple expanded 25% since 2007, which isn’t much considering that the starting valuation was in a bear market. On the other hand, Microsoft and Apple have seen more significant expansion. Yet, Adobe’s stock price has outperformed both of theirs despite this headwind.

Although Adobe started out more expensive, today it’s cheaper than Microsoft based on this metric and only slightly more expensive than Apple (despite Apple being primarily a hardware company with less revenue visibility).

Also, notice how Adobe’s multiple has been remarkably stable since 2014, a period in which it’s also had remarkably stable revenue growth in the tight 15-20% range (excluding a couple quarters in 2020). 2014 was around the time that Adobe made the transition to SaaS.

Also, while a P/E of 50 is “expensive” even relative to Microsoft and Apple, it’s a multiple that Adobe has supported for a long time. In fact, Adobe’s P/E multiple has only expanded 6.5% since 2007, which is less than the multiple expansion in Apple, Microsoft, or the overall market.

Adobe has been a very consistent performer, and that consistency is reflected in its stable valuation.

Adobe is one of the highest quality companies in the world, in the tech sector or otherwise. While the mega cap tech stocks Microsoft and Apple often steal the spotlight, Adobe has quietly outperformed them in the past and based on its valuation it looks capable of doing that again in the future.

Despite that, I’m still bullish on Microsoft and (to a lesser extent) Apple as well. As I wrote previously, Microsoft is exposed to IaaS, which is a unique growth driver that could accelerate its growth in the future and justify multiple expansion. I’m probably more bullish on IaaS/PaaS than I am on the creative economy, but Adobe has proven that creatives shouldn’t be underestimated many times in the past. I also love Apple’s products, although I’m not adding to that position at the current valuation.

Adobe is virtually a must-own for long-term investors in the tech sector. In many ways, it’s a steadier performer than the mega caps and has experienced less multiple expansion than they have this decade. Unless the company’s growth slows down a lot, it should continue to beat the market over the long-term regardless of macro headwinds.