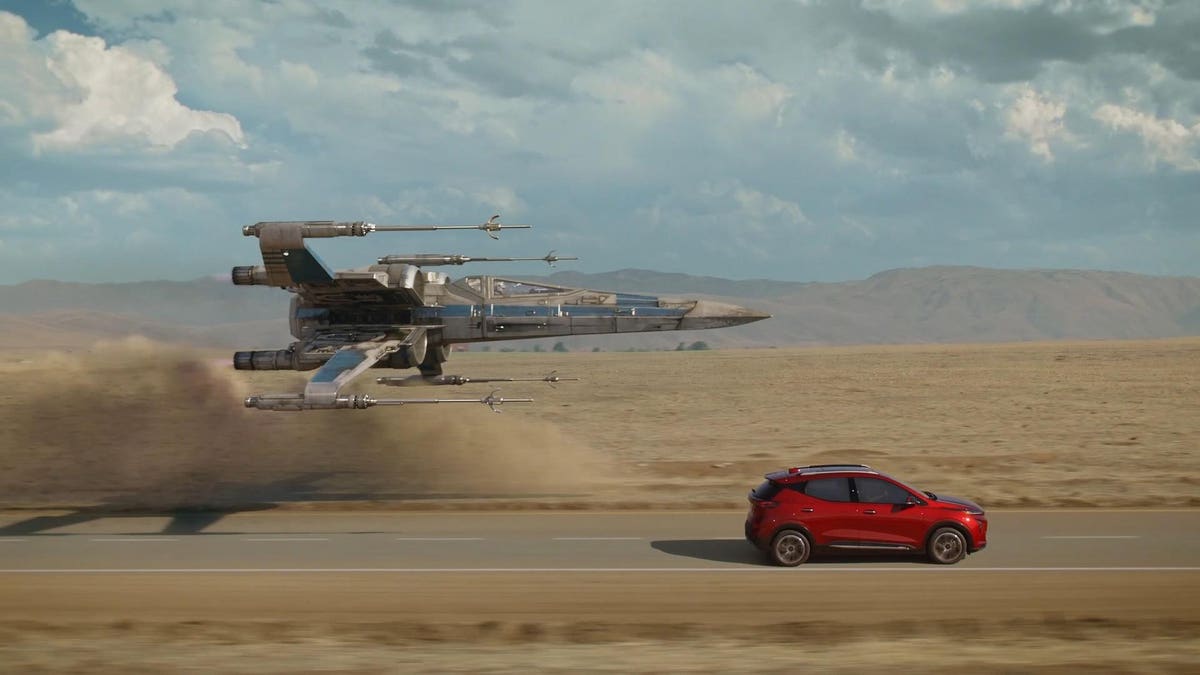 In 2011, a satirical commercial asked viewers a hypothetical question: “What if everything ran on gas?”

The ad, for the electric-powered Nissan Leaf, imagined a world where alarm clocks, coffee markers, microwaves and even dentist drills all had combustible engines rather than wires and plugs. Now, a decade later, auto brands are asking en masse: What if all cars ran on electric?

Using high profile directors and celebrities, new showrooms and publicity stunts, auto brands have been evolving how they market electric vehicles (EVs) to reach more mainstream audiences. But will the strategies fuel a more permanent switch?

Major companies and startups alike are debuting a range of new strategies to go along with their new cars, new batteries and new sustainability commitments in hopes of making EVs the norm in the next decade. General Motors aired a Super Bowl ad with an all-star cast. Ford hired a famous director for the Tokyo Olympics. Mercedes-Benz and startup Lucid have opened new showrooms in New York City to educate the market. Hyundai’s running EV ads starring Spider-Man.

Electric vehicles are already poised to be a focus yet again this year. Later this week at the 2022 Consumer Electronics Show in Las Vegas, GM and BMW will reveal new EVs. In February, Nissan will air its first Super Bowl ad since 2015 to promote the Ariya crossover and Z sports coupe. Later this year, Mercedes-Benz is also planning a major partnership with the upcoming film, Avatar 2.

“As you know they do not live on earth in the series,” Monique Harrison, Mercedes-Benz USA’s head of brand, told Forbes in October. “They will not live on Earth in any future one, so do not expect them to drive the EQS down Fifth Avenue, but the innovation of the series and the positioning of it is perfect to talk about our EQ product and what that can deliver here on Earth.”

Auto brands have been increasingly marketing to people interested in performance and luxury, going beyond marketing specific models to showcase the companies themselves as EV innovators. Experts say they’re also more open to teasing out new vehicles or technology sooner than they have in the past—painting a picture for skeptical buyers about an electrically charged future.

“From a high level, if you study the history of EVs, we’ve switched from marketing to the Birkenstock-wearing, soy latte-sipping green angle with the Prius and Leaf type,” said Jeffrey Osborne, an analyst at Cowen Securities covering sustainability and mobility. “And Tesla has shown that marketing to the masses works.”

The 2021 EV hype began early in the year when General Motors unveiled a new corporate rebrand to illustrate the focus on electric. The same week, it debuted a new “Everybody In” campaign starring writer Malcolm Gladwell, popular Peloton instructor Cody Rigsby and surfer Bethany Hamilton. Then in February, GM—which plans to have 30 EVs in the market by 2025—aired a Super Bowl ad starring Will Ferrell, Kenan Thompson and Awkwafina promoting the Lyriq crossover followed by a separate collaboration with Disney for the Chevy Bolt featuring classic characters from Star Wars, Dumbo and Peter Pan.

“You can’t be any more mainstream than Disney,” GM Chief Marketing Officer Deborah Wahl told Forbes in an interview last March. “And that was really intentional to change the idea that EVs are for just for a small segment of the population who are really worried about climate change to showing how perfect these vehicles are for families, for road-trip driving, for all kinds of usage.”

GM has sought to balance the timing of advertising investments with the likelihood of penetrating the market, according to Wahl. That includes appealing to people’s emotions while also educating them about electric vehicles.

During the Tokyo Olympics this past summer, Ford debuted a new ad directed by Chloe Zhao, who is known for writing and directing hit films like Nomadland and Eternals. Alix Toothman, a strategy director at Wieden + Kennedy working on Ford’s EV advertising, said having Zhao direct the commercial helps the formerly niche electric auto sector start to feel more appealing and relatable to mainstream audiences.

“I think she’s known for capturing incredibly human characters and imbuing all types of Americans with emotion and depth and character,” she said.

Marketing electric vehicles goes all the way back to the first EVs centuries ago. In 1899, ad for Baker Motor Vehicle Co. described the early EV as “the electric that meets every need of the society woman.” A decade later, Hupp-Yeats and Baker were both running EV ads for years in the popular weekly magazine, The Literary Digest. According to the U.S. Dept. of Energy, around a third of all vehicles on U.S. roads were electric by the turn of the century before nearly entirely disappearing in the 1920s and 1930s after cheap crude was discovered in Texas. Interest in EVs then later gained momentum again in the 1970s when GM deduced a prototype of an urban electric car followed by Sebring-Vanguard’s success with the CitiCar and its EV range of 50 to 60 miles. However, by the end of the decade, limited performance and range forced demand to wane yet again.

Compared to MediaRadar’s estimate of $2.9 billion spent on all auto advertising during the first half of 2021, money for electric vehicles is still small: EV ad spend mostly disappeared in 2020, but totaled $33 million between January and July 2021. That’s up 69% from the $19.5 million spent in 2019.

The EVs that are seen on TV are evolving, too. While Nissan had the highest number of unique TV ads for electric vehicles in 2019, it was briefly surpassed by Jaguar in early 2020, according to data from iSpot. By May 2021, Audi had the most unique ads with a total of 21 followed by Ford, Nissan, GMC and Chevrolet with 14 each. A separate report from MediaRadar found that Volkswagen ID.4, Lucid Air, Chevrolet’s EV, the BMW ix and the Nissan Leaf, spent the most on paid advertising in the first half of 2021.

“It looks to me from the outside like maybe they’re saying ‘let’s stop holding onto the past and really jump with both feet towards the future,’” said Meghan Busse, a professor at the University of Chicago’s Kellogg School of Management.

EV startups are also boosting their marketing efforts. Polestar—which has been eyeing an IPO in the near future—has hired the Silicon Valley ad agency YML to overhaul its digital presence and market to U.S. consumers. Before going public last year, Rivian revealed that marketing and promotion costs were $24 million in 2019 and $5 million in 2020. And although advertising costs have been “immaterial,” the company said spending could be “significantly higher and more sustained” than before to attract new customers. And Lucid, which also went public last year, opened a new showroom in June 2021 in New York City and built mystery boxes to promote the Lucid Air.

“It’s definitely an accelerated moment for the company,” Lucid Chief Marketing Officer Jeff Curry said back in July. “We’re not just launching the company right now. We’re launching the brand, a business and our first products all simultaneously over this year…It fits the moment we’re in too because so much of the companies going public now are not just financial stories—they’re also cultural moments.”

Auto executives credit Tesla Cofounder and CEO Elon Musk for helping to boost new interest in the category. (Kantar named the company the most valuable auto brand of 2021.) While Tesla has a reputation of not being a big advertiser, companies including Ford, Volkswagen, Audi and the EV startup Lucid all aired ads on Saturday Night Live back in May when Musk was guest host.

Beyond TV ads, Volkswagen and others are also increasing their investments on digital marketing to find new customers and transform the buying process. (After its SNL ad, VW saw online searches for the ID4 immediately increase by 800%.) In addition to campaigns such as the 2019 ad “Now You Can,” Volkswagen has developed a new brand design that launched in China and then globally while also overhauling dozens of digital channels and other owned online platforms. And in the coming years, the company plans to bundle its marketing engagement and media investment into green technologies to between 60% and 80%.

“I think now we are in the third epic period of Volkswagen,” Sengpiehl told Forbes last year. “In the 50s and 60s, we democratized mobility for everyone. In 80s, 90s, and 2000s, we democratized premium and luxury technologies for everyone. And now, for the next years, I think our big thing is we want to establish electrification and make it accessible—and not only for a few.”

The efforts haven’t come without detours. The day before April Fool’s Day, VW claimed it was changing its name to “Voltswagen” to illustrate its EV priorities and then claimed it was a joke—but not until after several mainstream media outlets had run stories describing the name-change as real news. A number of electric auto brands have recently faced more serious controversies: Several EV startups are facing federal investigations for potentially misleading investors and GM has issued recalls to replace batteries in more than 100,000 Chevy Bolt over fire concerns.

Despite all the hype, EVs still account for just a fraction of cars on the roads. According to a June survey conducted by Pew Research Center, EVs were just 2% of the new-car market for the past three years. From 2018 to 2020, the total number of all-electric vehicles sold declined by 3.2%, with EVs accounting for just 2% of the new-car market in the U.S. in each of the three years.

That low number could soon change. An October survey of 33,000 U.S. drivers conducted by YouGov and Forbes found that 22.9% would consider buying a new or used electric vehicle while 65% agreed that EVs “are the future of the auto industry.” When asked why they’d switch, the top three reasons included protecting the environment, saving money on taxes and maintenance and reducing fuel costs.

With brands debuting dozens of EVs in the next few years, Ford is focusing on electric versions of popular name plates like the Mustang and the Lightning F-150. And so far, it seems to be working: The company had previously expected to sell 50,000 Mustang Mach-E vehicles in its first year, but recently announced plans to sell 200,000 by 2023.

“We’re betting on our most iconic and most unique vehicles,” said Ford Chief Communications Officer Mark Truby. “I think you could argue that [with] the uniqueness and the novelty of electric vehicles, we’ll look back say, ‘Oh remember when it was crazy when we saw an EV? Now they’re everywhere.’”

Brands like Ford and Hyundai have been using augmented reality to interact with potential customers online. To promote EV and hybrid models like the Santa Fe HEV and Ioniq 5, Hyundai partnered with National Geographic last spring on a series of augmented reality filters on Instagram that let people explore various national parks virtually or to enhance their in-person experience if they happen to be at Zion, Great Smokey Mountains or Yosemite.

“Originally we said we’ll lean into a digital activation for, say, Ioniq,” Hyundai CMO Angela Zapeda said. “But the car is the halo for the brand so now we’re starting to think that Ioniq is bigger than just digital. Which we can use very effectively when we’re talking to specific consumers.”

Zapeda used to worry about how to market EVs when the volume of current retail inventory is still gas-powered. However, now that the company plans to have 10 EV in market by the end of the year, advertising helps illustrate the evolution.