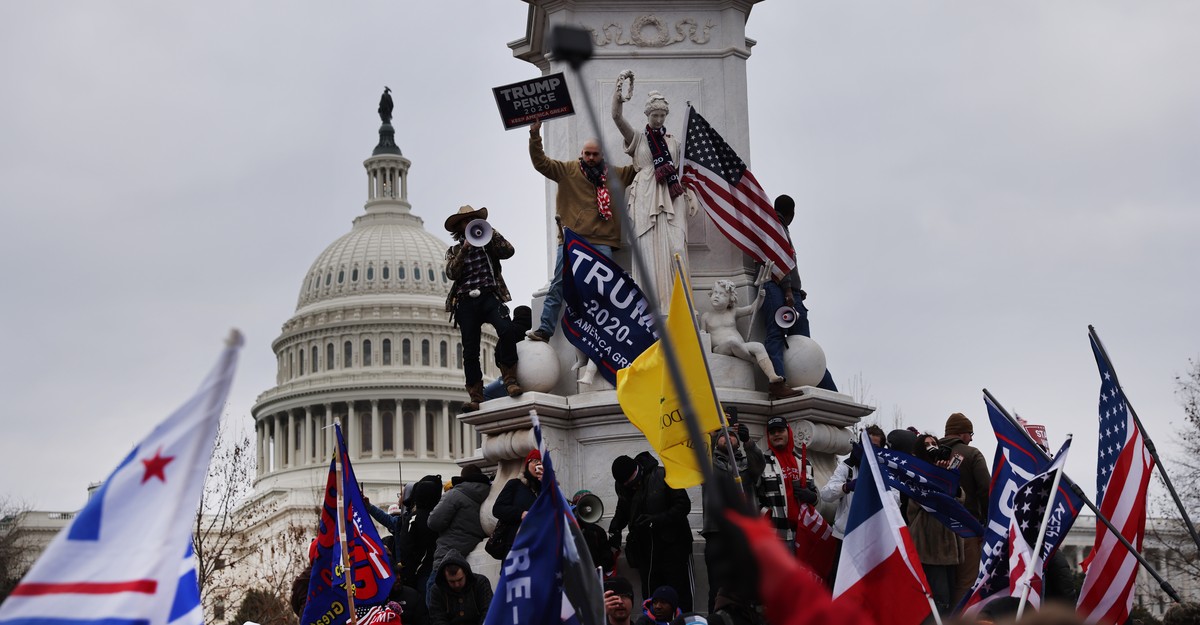 What did the Oath Keepers and other militia groups really think they would achieve by attacking American democracy and losing everything? I suspect they wanted only one thing: to escape the boredom of their own lives.

Even before January 6, 2021, I wondered about the kind of people who live the classic American paranoid life, the citizens whose politics, as Richard Hofstader described them almost 60 years ago, are a stew of “heated exaggeration, suspiciousness, and conspiratorial fantasy.” I first encountered this mindset when I worked in the U.S. Senate as personal staff for the late John Heinz of Pennsylvania: I would field calls from constituents who demanded to know whether the senator was in league with the Trilateralists or the Bilderbergers or the one-worlders. I was barely 30 and taken aback at speaking with people who seemed to be living on some other planet.

I am thinking about such people again, now that the leader of the Oath Keepers, Elmer Stewart Rhodes, and some of his associates are likely headed for federal prison. As I followed these trials, I kept thinking of a scene from the HBO World War II miniseries Band of Brothers. At the end of the European war, an American soldier named Webster is riding in the back of an open truck, watching the defeated German prisoners trudging along the road. In a fit of rage, he begins shouting at them, “What were you thinking? … Dragging our asses halfway around the world, interrupting our lives. For what? You ignorant, servile scum! What the fuck are we doing here?”

The scene is also something of a touchstone for my friend Charlie Sykes, who in 2020 discussed how it made him think of the diehards and cultists and election deniers whose delusions would eventually bring them to the Capitol in 2021. During the Oath Keepers’ trial, I found myself wanting to yell at the television like Private Webster: For what? The life of a great democracy was endangered why? I wasn’t doing this because Rhodes and his band were the Axis, but because, like Webster, I found it incredible that we had to interrupt our lives for a movement built on lies and political hallucinations.

I am struck not by the grandiosity of the militias, but by their smallness. Rhodes is a disbarred lawyer who managed to shoot himself in the eye. Kelly Meggs, the leader of the state Oath Keeper chapter who was also found guilty of seditious conspiracy, was a Florida car dealer, a detail so perfectly clichéd that Hollywood would never have dared script it. (And despite being a man of a certain generous girth myself, I will note that the cosplaying amateurs who seemed to adore these organizations were not exactly trim and fit soldiers, which is why they were often dubbed the “Gravy Seals” and “Meal Team Six” by internet wags.) And yet, for these small, unhappy men, we had to suffer the first failed peaceful transfer of power in American history?

And just what did the Oath Keepers intend to do had they won the day? Perhaps they expected Donald Trump to strut out onto the south balcony and declare martial law. Maybe they thought that they would march into Congress and be greeted as liberators, perhaps with medals bestowed by one of the rebel princesses. But in the end, it was a rebellion about nothing. Or, more precisely, it was a rebellion born in affluence and boredom and a desperate search for meaning in otherwise ordinary lives.

I’ve written before about the threat to democracy stemming from this profound need to feel in control, to feel important, to find some heroic mission in life. I have long been haunted by the writer Eric Hoffer’s 1951 warning that the most dangerous people in a society are not the poor and desperate but the well-off and bored:

There is perhaps no more reliable indicator of a society’s ripeness for a mass movement than the prevalence of unrelieved boredom. In almost all the descriptions of the periods preceding the rise of mass movements there is reference to vast ennui; and in their earliest stages mass movements are more likely to find sympathizers among the bored than among the exploited and suppressed. To a deliberate fomenter of mass upheavals, the report that people are bored stiff should be at least as encouraging as that they are suffering from intolerable economic or political abuses.

As the columnist George Will put it in 2020, when society is bored by its own comforts, there is a “hunger for apocalypse,” a need for great drama that can provide some sense of purpose in life.

The Oath Keepers and the militia movements found their sense of purpose in a belief that their fellow citizens were too hoodwinked, too stupid, too corrupt to run an election and know that the results are fair. They made ominous-looking arm patches and wore tactical gear and glowered through their sunglasses at the people whose rights they claimed to be defending. They arrogated to themselves the duty to interpret the Constitution in any way that would dissolve their sense of emptiness, douse their own insecurities, and make their lives more interesting.

Such aimless people are at the foundation of the global crisis that modern democracy is in. They believe that they are the enlightened and brave among us, because they need to feel enlightened and brave instead of confused and frightened. They need a purpose in life and they are shopping for one among the dumpsters of the internet and television, egged on by political opportunists who would gladly waste their lives—and ours—for their own advancement.

Some of these aimless people will now go to prison. Others will live out their lives stained by their participation in January 6, with careers obliterated, friends gone, and family destroyed.

And, as Private Webster would demand to know, for what?

Too Wild to Love

Like most everything concerning Texas, leaving the place is too vast a thing to comprehend all at once. I was standing at my kitchen window in New England the day I finally realized I had left the state, some dozen years after my departure. My mother had called to say she and my father had packed their things, pulled up stakes in Fort Worth, and set out for their new home in the mid-Atlantic. It was March: buttercups and jonquils among green tufts in the drainage ditches there; icicles peeling the gutters away from the eaves here.

For a moment, the bleakness ahead of me—a dull rattle of freezing rain on the windowpane—seemed a certain sign from the universe that none of this was meant to be. More than 200 years of family history, most of it consigned to the front matter of family Bibles and photograph inscriptions, now traveled unsteadily to some new home as my folks drove toward Maryland along the broad highways of North Texas. The remainder of it, written in the bones of all the people who came before me, stayed in the red earth they left behind.

Read. “A Provincial Roman Town,” a poem by Adam Zagajewski.

“They had their gods, quarrelsome, preoccupied, / neglectful. But there was also divinity, / hidden everywhere, invisible.”

Watch. The Wonder, a new film on Netflix in which Florence Pugh plays a nurse caring for a “fasting girl” who is stubborn, determined—and dying.

It’s December 1, which is the date that I allow myself to begin to listen to Christmas music. I resolutely avoid all things Christmas until December; if cable runs a Christmas special in November, I flip the channel. October is for Halloween; November is for Thanksgiving; those are the rules. I am a child of the 1960s, so in December, I tend to tune in to the classics; I will never stop Andy Williams from telling me it’s the most wonderful time of the year, and I want to live in Dean Martin’s marshmallow world. I will dance along with Linus and Lucy. Oddly enough, I also love the strange run of Christmas songs that popped up in the 1980s, including one of my faves, “Christmas Wrapping,” by the Waitresses.

I am hesitant to mention Band Aid’s “Do They Know It’s Christmas,” the charity effort by a group of mostly British superstars meant to help Africa in 1984. I mean, even Sir Bob Geldof hates it, and he wrote it. I, however, have a soft spot for the song. I owned a 12-inch vinyl version in which all the stars wish you “Happy Christmas” and an exhausted Geldof signs off at the end. But I also like the song because it was wonderfully uninformed: Ethiopia was one of the starving nations that prompted the Band Aid effort, but apparently, no one knew that Ethiopia is a heavily Christian country. A plurality of Ethiopians are Eastern Orthodox (as am I) so of course they knew it was Christmas. Still, with all due respect to Sir Bob—it might not be Andy Williams, but it really is a pretty good song.