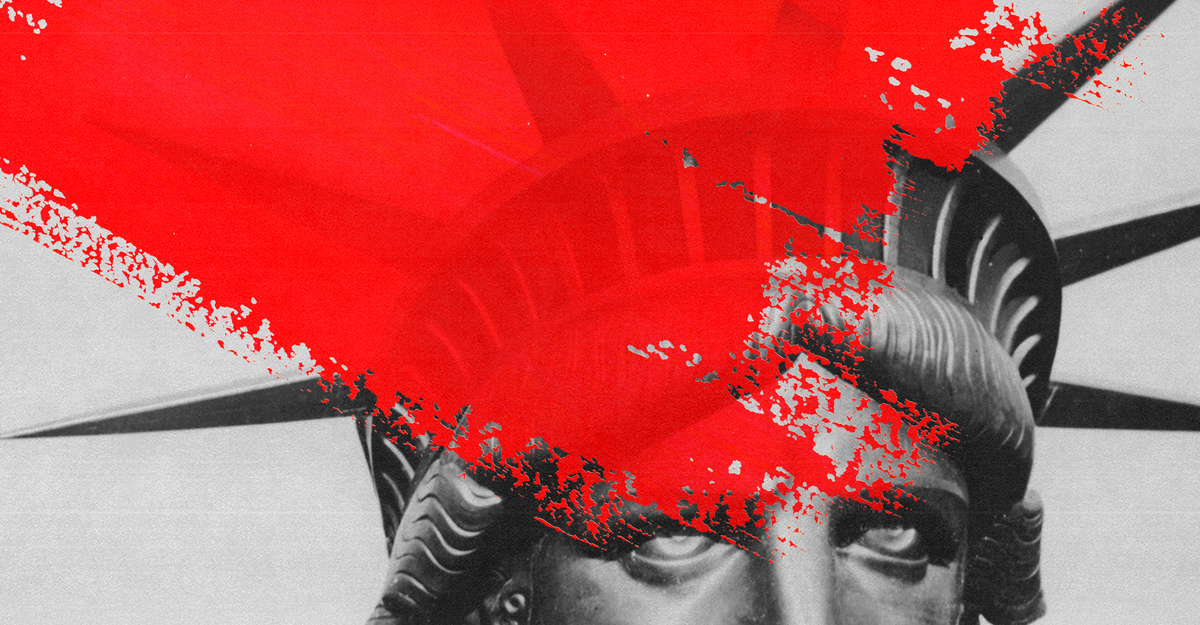 It was one of the stranger midterms of the past few decades. Democrats, facing down a rout as inflation ran stubbornly high and President Joe Biden’s approval ratings remained underwater, managed a string of decisive victories that may allow them to control the Senate and even halt a significant Republican takeover of the House. Many races are still outstanding, but the roster of alienating, Donald Trump–backed candidates plus the Dobbs abortion decision appear to have held back the GOP. A red wave did not swamp America on Tuesday.

It did, however, lap at one of the bluest of states: New York. It stood out as a sore spot, the place where their House majority probably went to die. Democrats lost almost every single closely contested congressional seat in the state. Kathy Hochul, the incumbent governor, was elected by just six points, underperforming even Gretchen Whitmer, who won a second term as governor of Michigan—a state that Trump won once and nearly won twice. Hochul’s opponent was Lee Zeldin, a congressman who voted to overturn the results of the 2020 election. Not only did Zeldin not repudiate Trump, but he proudly took the former president’s endorsement. Yet Zeldin drew closer to running New York than any Republican in the last four gubernatorial elections, with 47 percent of the vote.

Hochul’s victory came after weeks of narrowing polls that raised, belatedly, alarm bells among the Democratic establishment’s biggest stars. In the final days, Kamala Harris, Bill Clinton, Hillary Clinton, and Biden himself all came to stump for Hochul. In a state with an overwhelming Democratic registration advantage, they managed to motivate enough Democrats in New York City and Westchester, a left-leaning suburb, to offset Zeldin’s margins elsewhere. In Hochul’s triumph, there will be some who invoke Gavin Newsom’s recall victory over the far-right Larry Elder in California, pointing to a media hype cycle that made the race seem closer than it was. But Newsom obliterated Elder. Hochul did not obliterate Zeldin.

Why? And how did Sean Patrick Maloney, the head of the Democratic Congressional Campaign Committee, fall to a Republican assemblyman, becoming the first campaign chair in either party to lose his seat in three decades? How did Republicans win all four open seats on Long Island, the New York City suburb that usually sends at least one or two Democrats to Washington?

The likely answers are not terribly complicated. One was New York’s broken redistricting process, which was warped by the disgraced former governor Andrew Cuomo. Another was crime: Fear of it was visceral across the state, and Zeldin, along with down-ballot Republicans, hammered it more than any other issue, to great effect. The third, perhaps, was the top of the ticket. Hochul offered no compelling rationale for her election. She barely talked up her accomplishments or even what she wanted to do next term, beyond safeguarding abortion rights. It was not a campaign that will be fondly remembered.

The redistricting saga doomed Democrats in New York and maybe everywhere. Ten years ago, when Republicans still controlled New York’s State Senate, Cuomo let the Republicans gerrymander their own lines in exchange for support of a ballot measure creating a quasi-independent commission of Republicans and Democrats to draw new lines for 2022. The scheme was designed to fail, because the commission was stacked with party apparatchiks who would never agree.

Cuomo resigned in 2021, following a spate of credible allegations of sexual harassment and assault. By then, Democrats had full control of the State Senate. When the bipartisan commission predictably deadlocked, the Democrats unveiled House maps that were undoubtedly friendly to them. But Republicans mounted a legal challenge, financed in part by the billionaire cosmetics heir Ronald Lauder. Lower courts in conservative areas sided with the Republicans, pointing, in part, to an anti-gerrymandering clause in the state constitution. Finally, the case reached the Court of Appeals, New York’s version of the Supreme Court, which shot down the Democrats entirely: Cuomo-appointed judges threw the process to an independent special master and didn’t give the legislature a chance to fix its proposed maps.

From a good-government perspective, the special master performed his duties well. The new districts were compact, prizing competitiveness over incumbency protection. The problem, of course, was the bizarre process that led to such an outcome, and the fact that it forced New York to have two different primary dates, diminishing turnout. In another year, neutral terrain would have been fine enough for Democrats. But this was 2022, and a red wave, at least in New York, was building. It was these competitive districts that washed away Democrats on Long Island and in the Hudson Valley.

Had New York Democrats done more, they could have averted such a disaster. There is no functioning state Democratic Party. Organizing is an afterthought. Political machines and their attendant clubs have atrophied. The left-wing Working Families Party managed an 11th-hour get-out-the-vote operation for Hochul, but hardly anyone else did. Hochul’s own messaging was a muddle. On Election Day, few Democrats could articulate why, other than a fear of a Trumpist takeover, they wanted her to remain governor. Zeldin may have been disingenuous and incendiary—in the closing weeks of the campaign, he blamed almost every single stabbing, shooting, and murder on her—but at least he was memorable. He would, somehow, clean up crime. Hochul struggled for a ready response.

If Republicans walk into the House majority come January, they’ll have New York to thank.