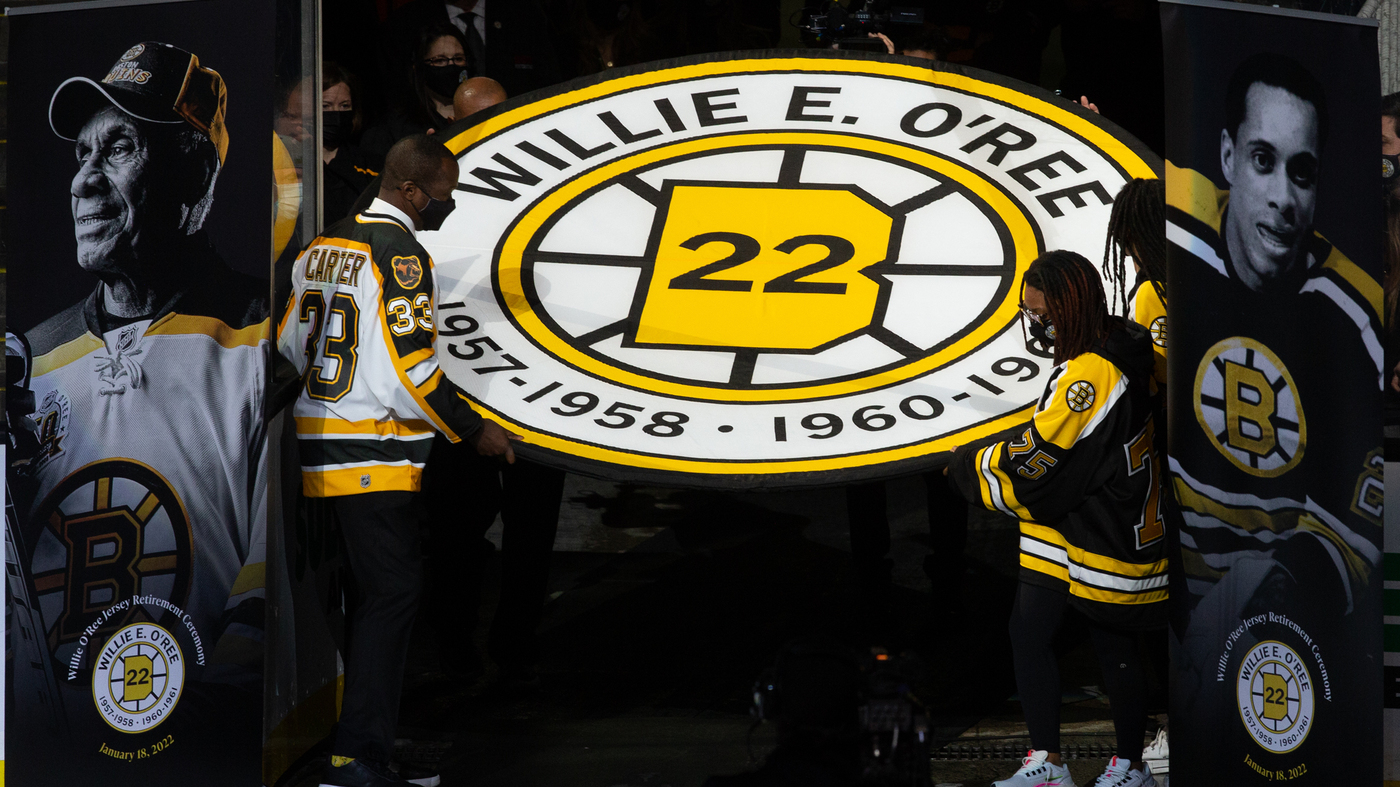 Anson Carter helps carry the banner for former Boston Bruins player Willie O’Ree, as the team retired his No. 22 jersey at the TD Garden Tuesday night.

Anson Carter helps carry the banner for former Boston Bruins player Willie O’Ree, as the team retired his No. 22 jersey at the TD Garden Tuesday night.

The Boston Bruins have a new number hanging over their home ice after Willie O’Ree’s No. 22 was lifted to the rafters Tuesday night. O’Ree broke hockey’s color barrier with the Bruins in 1958, when he became the first Black man to play in the NHL in 1958. And he did it while keeping a secret: he could only see out of one eye.

“I will never forget how my teammates in the Bruins locker room accepted me as one of their own,” O’Ree said as he accepted the honor. “This was a time when some of the fans and opposing players were not ready to see a Black man in the NHL.”

O’Ree has acknowledged those were rough times, citing the racial slurs shouted at him in cities such as Chicago, Detroit and New York.

“But, you know, I had geared myself up for that and I told myself, Willie, you’re a Black man and be proud of who you are,” he told NPR in 2008. “Just go out and play hockey and try to represent the hockey club to the best of your ability.”

He set his sights on the NHL early on

O’Ree grew up skating in New Brunswick in Canada, and he decided early on that he would play in the NHL. But then, during a junior league game, a puck hit him hard in the eye. At the time, players didn’t generally wear face masks — or helmets, for that matter. The injury required an operation.

“I’m in my recovery room and the doctor comes in and says, ‘Mr. O’Ree, as I’m sorry to inform you, the impact of the puck completely shattered the retina in your right eye and you’re going to be blind and you’ll never play hockey again,’ ” O’Ree said in 2008.

“I was a left-hand shot, playing left wing,” he said. “So to compensate, I had to turn my head all the way around to the right to pick the puck up with my left eye because I couldn’t see out of my right eye. You know, the 21 years I played professional, I played with one eye.”

O’Ree has said he didn’t tell coaches or teams about his eyesight, relying on his skills to keep him on rosters. He was known for his speed and ability to score. And luckily for O’Ree, none of his clubs gave him an eye exam.

Another career breakthrough came in the 1960s, when O’Ree’s coach in the Western Hockey League needed him to play on the right side of the ice, rather than the left.

“So now I switch over to my right, the boards are on my right, and I don’t have to turn around and look over my shoulder,” O’Ree said in 2012.

“The only disadvantage was taking passes on my backhand, but after three or four games, I fell right into it,” he said. “I played the last 12 years of my career on the right side, and I won the Western scoring race in 1965, in ’69, and was voted onto four all-star teams due to the fact I switched over.”

When he stopped playing, O’Ree worked to help diversify the NHL

O’Ree didn’t have a long NHL career, but it included two stints with the Bruins. And because of his love for the game, he worked as the NHL’s diversity ambassador for more than two decades. O’Ree was enshrined in the Hockey Hall of Fame in 2018.

The Bruins retired O’Ree’s number on the anniversary of the night in 1958 when he first skated onto the ice for the team. Because of the COVID-19 pandemic, he didn’t attend the ceremony in person, appearing instead on the massive scoreboard screen.

O’Ree said he and his family were “overwhelmed and thrilled,” in a video call with current Bruins players and coaches.

“When I scored my first goal in the Garden, they gave me a two-minute standing ovation. I’ll never forget it,” he added.