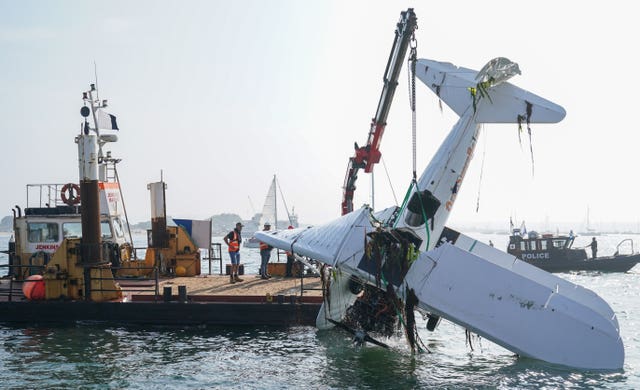 The pilot of a wingwalker plane which crashed into a harbour during an air display deserves a medal, according to rescuers.

The two-seat biplane had been taking part in the Bournemouth Air Festival when it came down in Poole Harbour, near Sandbanks, on Saturday afternoon.

Libby Chambers, her partner, Alan Badenhorst, and their three children had been watching the air show from a dinghy and witnessed the crash.

“The pilot was straight out and I remember he pulled the wingwalker out and she was in quite a state really – she was petrified and couldn’t stop screaming,” Ms Chambers told the Bournemouth Echo.

The family went to rescue the pilot and wingwalker and pulled them into their dinghy.

“The pilot was incredible, he deserves a medal – I have no idea how he missed the rocks, the marker and the boats – he was just out of this world,” added Ms Chambers.

Eyewitness Gill Jarvis, 50, from Christchurch, was on an open-top bus with her daughter when she saw the plane crash.

“We hadn’t quite set off on the Swanage ferry and it just happened in front of our eyes,” she told the PA news agency.

“I think the engine was off and it was silent. So you couldn’t really hear anything. And then it just suddenly went in the sea.”

She described hearing news of the crew’s survival as “a huge relief”.

The final day of the four-day festival went ahead as planned and more than 800,000 people attended.

Festival director Jon Weaver said: “We have had an almighty year trying to pull this together, with the many restrictions we’ve had to work to and hoops we’ve often had to jump through, to ensure this event could go ahead and I am so pleased we’ve done so.

“I want to thank every single member of staff.

“I’d also like to wish well the AeroSuperBatics team, a longstanding favourite of the festival, who we look forward to welcoming back next year.”